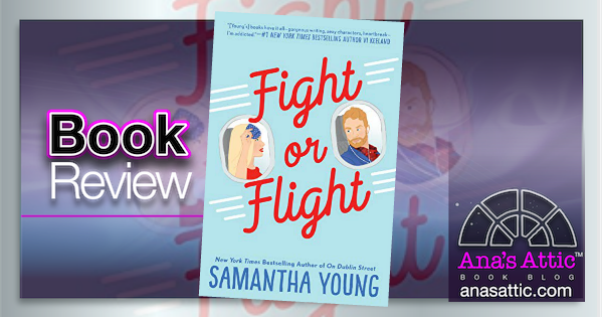 Fight or Flight by Samantha Young

Fight or Flight by Samantha Young was completely unputdownable, but I still have very mixed feelings about it. I feel like she started writing a light enemies-to-lovers romcom, had the cover designed, but then maybe it took on a life of its own, because the cover, as cute as it is, does not reflect the angsty, emotional story inside at all. 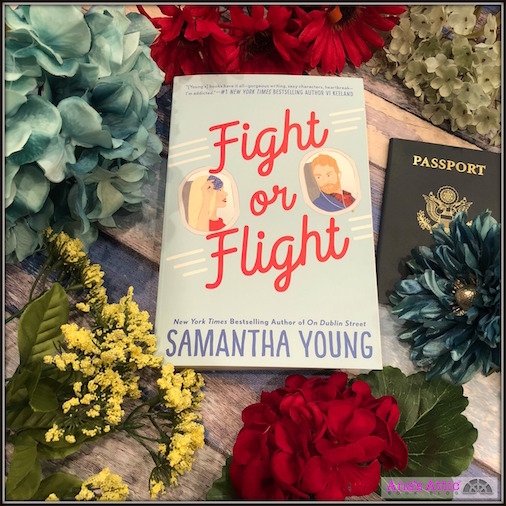 The beginning feels like a romcom when the hero and heroine meet at the airport and instantly hate each other. Then they find themselves seated next to each other on a flight, and Caleb, the asshole, becomes even more of an asshole. Since I usually love alpha-holes, and this one was tattooed businessman with a Scottish accent, I was waiting to hear his story or POV to find out why he was SUCH A DICK.

“I’d rather sew my eyes shut with cocktail sticks than sit next to an ill-educated dickhole who defies the rumor that Scottish people are the nicest people in the world.”

But this story was a single POV, Ava’s. I’m kind of mixed on that. I think it made it way harder for Caleb to redeem himself in my eyes without his side of the story, yet we were really feeling all the doubt and insecurities Ava felt since she didn’t know his side either.

“You’re going to be as good at this as you look, aren’t you?”
His answer was a devastatingly arrogant grin as he pulled me none too gently into the elevator and pushed me up against the wall as the doors closed. He pressed his long, hard body against mine. “Never fear, babe. I’m about tae ruin you.”

Despite these two hating each other, on an unexpected layover, they gave in to the sizzling attraction of their hate-lust, and it was HOT. I love hate sex!

“You’re not my type. Your hair, your makeup, your clothes, your attitude. You’re too beautiful and you know it. And yet I’m desperate to have you again.”

The lack of manners and the things Caleb said made it really tough to warm up to him, but you can guess he is protecting himself.

“Seriously. Some omnipresent being is playing with us. No two people can keep bumping into each other like this without the help of some twisted fate.”

When Caleb’s visit to Boston gets extended, and they can’t seem to avoid each other, they decide to keep up the sex-only relationship, as long as they don’t get feelings involved, and he continues to push her away with cruel remarks. Ava’s past is painful, and Caleb’s remarks tend to rub salt in her wounds, YET SHE KEEPS GOING BACK FOR MORE. She hates him, but he’s SO HOT, and the sex is SO GOOD. At first, it was fun. Nothing wrong with a little hate sex, right? But then it just became UNHEALTHY, and even though I was still completely sucked into the storyline, I started to get angry with it.

“It’s sex with a guy who somehow manages to make me feel this small”— I gestured with my forefinger and thumb—“every time he opens his mouth.”

I loved Ava’s friend Harper so much! Harper was going through her own hell, but she knew her friend deserved more.

By almost the end, I decided that this couple is better off apart, because Caleb really couldn’t redeem himself in my eyes.

“Even if he does care about me, I couldn’t be with someone who would choose to inflict that kind of pain on me just to protect himself.”

So although I couldn’t put the book down, I got really frustrated and stopped rooting for the couple. I wish I was able to see more of them together and happy to feel better about them together, but there just wasn’t much of that. It was angst till the very end, though I still enjoyed reading every drop of the journey. 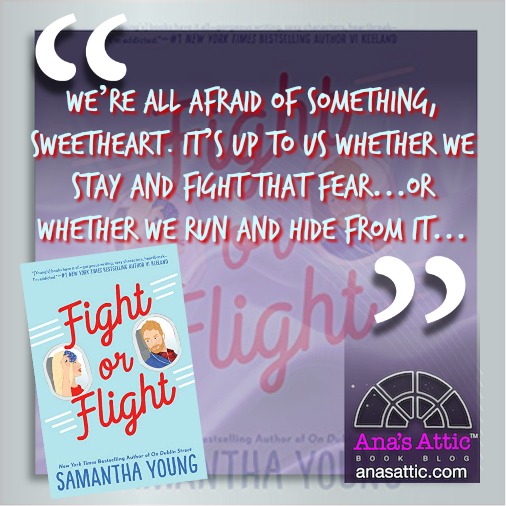 I am so torn on Fight of Flight! I could not put it down and pretty much blew off everything and read it in one sitting. But because of the cover, I was expecting fun and light. While the story started out with fun banter, it quickly evolved to angsty and more dramatic. Samantha Young is great at angst and she proved it here. I loved Ava, the heroine. Caleb was a super hot Scot, but his hotness never made up for his assholishness. I thought some of the things he said were just too hurtful to forgive so easily if at all, and I think that this would be a super unhealthy relationship. Maybe if there was more time that the couple was together (like a longer epilogue) I would feel better about them, but it wrapped up quickly without enough couple time for me. There were parts of Fight or Flight that I loved.  The first half was 5 stars for me, but the push and pull and Caleb’s cruel comments just went on too long for me, pulling my rating down to a 4 overall because it still kept me sucked in. I loved the side characters and hope we get more from them! 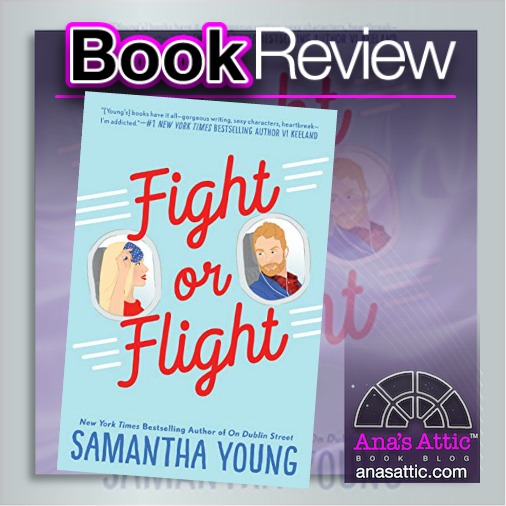