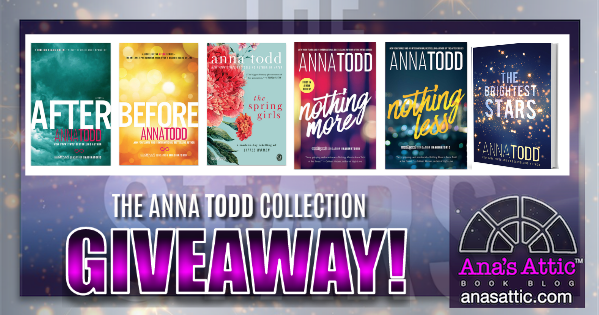 Anna Todd is partnering with Ana’s Attic for a Giveaway to celebrate the release of The Brightest Stars by Anna Todd.

International bestselling author Anna Todd returns with a gripping novel about a young woman’s journey towards love, and the obstacles life throws up at every turn.

Karina knows the harsh realities of military life. And like anyone who has grown up around an army base, she knows the background noise that follows a soldier home from war. That’s why she’s forging her own quiet life in her own little house. But she hasn’t turned her back on her family. She’s the glue that holds them together–when her father is deployed, when her brother, Austin, has another brush with the law.

Karina knows that she has to look after herself, that she can’t always fix what’s broken. But when Austin’s behavior worsens and her father’s reactions grow more extreme, Karina feels her own edges beginning to fray. That’s when she meets him–a closed book she’s desperate to open.

At just twenty, Kael is a handsome, brooding soldier struggling with the aftermath of two tours in Afghanistan. He’s emotionally damaged and closed off. Quiet doesn’t begin to describe him. But as Karina gets used to his stable presence, she finds it hard to ignore the way he makes her feel. In their time together, she finds the stillness she has always wanted and never found. She lets down her guard. And she lets herself fill in the blanks about this mysterious man.

But illusions quickly made are quickly shattered. That’s when Karina has to find her own courage–to untangle the truth from the lies, and decide what she’s going to do about it.

A riveting story about love and lies, THE BRIGHTEST STARS will stay with you long after the last page has been turned. 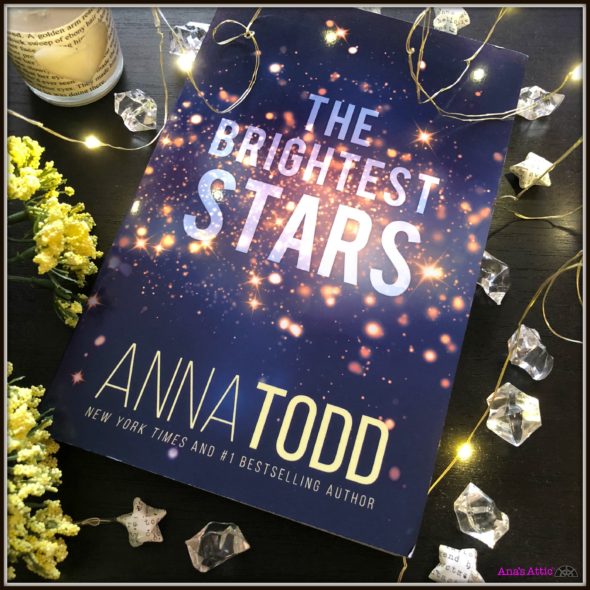 The wind whips around the coffee shop each time the old wooden door creaks open. It’s unusually cold for September and I’m pretty sure it’s some kind of punishment from the universe for agreeing to meet up with him, today of all days. What was I thinking?I barely had time to put makeup over the swollen pockets under my eyes. And this outfit I’m wearing—when was the last time it saw the wash? Again, what was I thinking?

Right now I’m thinking that my head aches and I’m not sure if I have any ibuprofen in my purse. I’m also thinking that it was smart of me to choose the table closest to the door so I can get away quickly if I need to. This place in the middle of Edgewood? Neutral and not the least bit romantic. Another good choice. I’ve only been here a few times, but it’s my favorite coffee house in Atlanta. The seating is pretty limited—just ten tables—so I guess they want to encourage a quick turnaround. There are a couple of Instagram worthy features, like the succulent wall and that clean black and white tile behind the baristas, but overall it’s quite severe. Harsh gray and concrete everywhere. Loud blenders mixing kale and whatever fruit is trendy at the moment.

There is only one creaky door: one way in, one way out. I look down at my phone and wipe my palms on my black dress.

Will he hug me? Shake my hand?

I can’t imagine such a formal gesture. Not from him. Damn. I’m working myself up again and he isn’t even here yet. For about the fourth time today, I can feel the panic bubbling just below my chest and it dawns on me that every time I imagine our reunion I see him the way I did the very first time I laid eyes on him. I have no idea which version of him I’ll get. I haven’t seen him since last winter and I have no idea who he is anymore. And really, did I ever know?

Maybe I only ever knew a version of him—a bright and hollow form of the man I’m waiting on now.

I suppose I could have avoided him for the rest of my life, but the thought of never seeing him again seems worse than sitting here now. At least I can admit that. Here I am warming my hands on a coffee cup, waiting for him to come through that that raspy door after swearing to him, to myself, to anyone who would listen for the last few months that I would never . . .

He’s not due for another five minutes, but if he’s anything like the man I remember, he’ll strut in late with that scowl on his face.

When the door tears open it’s a woman who walks in. Her blond hair is a nest stuck to the top of her tiny head and she’s holding a cell phone against her red cheek.

“I don’t give a shit, Howie. Get it done,” she snaps, pulling the phone away with a string of curse words.

I hate Atlanta. The people here are all like her, tetchy and forever in a hurry. It wasn’t always like this. Well, maybe it was; I wasn’t, though. But things change. I used to love this city, especially downtown. The dining options are out of this world and for a foodie living in a small town—well, that alone was reason enough to move here. There’s always something to do in Atlanta and everything is open later than it is around Ft. Benning. But the biggest draw for me at the time was that I wasn’t constantly reminded of military life. No camo everywhere you look. No ACUs on the men and women waiting in line for the movies, at the gas station or Dunkin Donuts. People speaking real words, not just acronyms. And plenty of non-military haircuts to admire.

I loved Atlanta, but he changed that.

That was the closest I was getting to admitting any blame in what went down.

Anna Todd is the New York Times bestselling author of the After series, The Spring Girls and the upcoming The Brightest Stars. Always an avid reader, she began writing stories on her phone on Wattpad, the reading and writing multiplatform for original stories, with After becoming the most read series on the platform with over 1.5 billion reads. The print edition was published in 2014. It has been published in over 30 languages, with more than 11 million copies sold worldwide, and is a #1 bestseller in Italy, Germany, France and Spain. The film adaptation, which Anna is co-producing, is set to be released in early 2019. Anna and her husband currently live in Los Angeles. 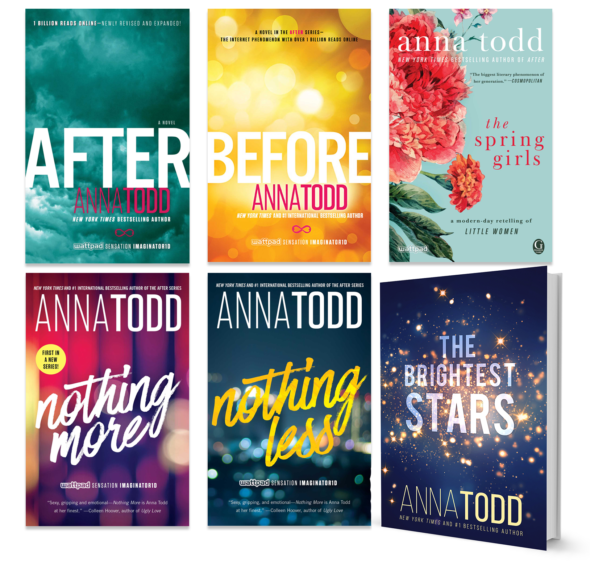 THE ANNA TODD COLLECTION
Binge-read Anna Todd! One (1) winner receives:
· After and Before from the After series
· Nothing More and Nothing Less
· Plus standalones The Spring Girls and The Brightest Stars.

Giveaway open to US addresses only.
Prizing and samples provided by Anna Todd.

Share this Giveaway on any of your socials. Tag @anasatticbookblog on Facebook, @anasattic on Twitter and @anasatticblog on IG. One chance for each share. Then come here and tell me where you shared. Ends 10/25/18. 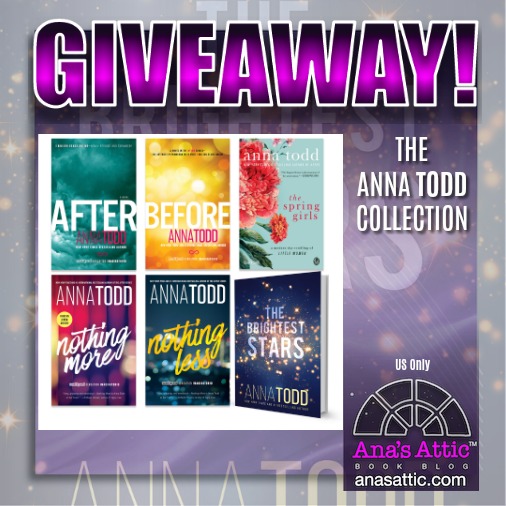