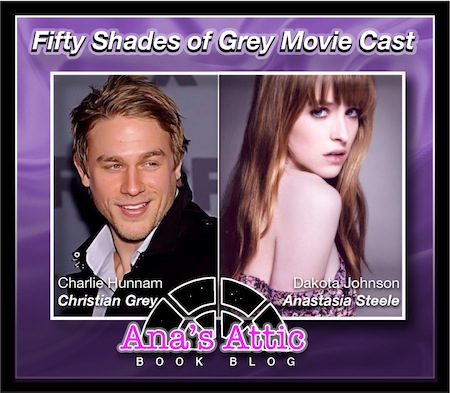 Lets face it. No movie can live up to the Fifty Shades of Grey books in your head. At least not for me. But I think that the casting isn’t bad at all. Are they my first choice? No. Jesse Pavelka is the only one who I ever thought was perfect for the role of Christian. And to tell you the truth, I think this photo of Charlie Hunnam comes pretty close to the Fifty in my head. As far as Ana goes…well that’s me. I never pictured anyone else besides a skinny, young, beautiful version of me. So if it isn’t me, it isn’t going to be the Ana in my head.

I’m interested in how the movie will be done. The inner goddess will be gone, the hot sex can’t be shown. But I expect it will be a nice trip to the movies to see how they did it. I love a romance, so I expect to enjoy the film very much, and I think that these actors will gradually become who we think of in our minds when we picture Christian and Ana (I’m lying. Still me.)

When Twilight came out Robert Pattinson was SO wrong. They all were. But now, they are the characters. Despite how the movies didn’t do the books justice, I still bought the blue rays and have watched them several times.

Everyone needs to relax, chill, and trust that Hollywood and E.L. James will do the best possible job with this. It’ll grow on you.

As for me, I’ll be there opening night.