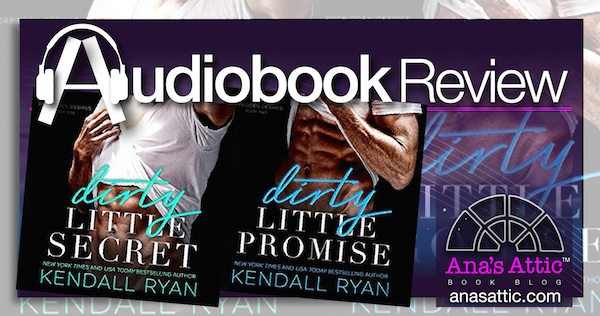 Dirty Little Secret and Dirty Little Promise by Kendall Ryan are a duet; each doesn’t stand alone. The first ends in a cliffy, but the main story is resolved in the second book, even though a third, featuring a different couple is coming.  These were my first Kendall Ryan books, and I was excited because I have heard many good things! While I had a few issues with the duet, I did enjoy it, and plan on reading the third in the series.

After listening for a little while, I found myself going to check when this was published. It reminded me so much of the rash of books published after Fifty Shades, that I thought perhaps I was reading Ms. Ryan’s first series. We have the sweet, innocent bookworm/librarian, and the dashing, dominant, rich, broody Gavin Kingsley. He even said “I exercise control in all things”! He pilots his own helicopter, and a major plotline has some HUGE similarities to Fifty (but it’s a spoiler so I can’t say!) PLUS, the narrator is the same as Grey and Darker.

Emma Bell, librarian, (the sweet innocents are always Emma aren’t they?) has been lusting after a guy that comes into the same coffee shop as her.

“And every morning, promptly at ten to eight, Mr. Tall, Dark, and Sinful strolled inside and ordered a double shot of espresso to go.”

She never had the nerve to talk to him, but one day, when he drops his card by the register, she retrieves it and googles his company, Forbidden Desires, an upscale escort service.

We get Gavin’s POV too, and he wanted her. He left his card there hoping she’d retrieve it, but later realized it was a mistake. Too Late.

“She was a classic next-door-type. A walking wet-dream. Something I had no right to desire, but I wanted all the same.”

So she visits his business, and is offered a job. Gavin is denying his attraction, so he and his brother Cooper hire her to be their escort to share. (Not sex, just someone to go to events with). She couldn’t say no! Tons of money and two of the hottest guys she’s ever seen? Yes please.  But of course, she was really hoping Gavin would just step up and claim her.

“The two of them together were completely overwhelming. So much masculine energy, the room practically overflowed with testosterone, making me dizzy.”

Gavin and his brother Cooper were two polar opposites. While Gavin was silent, broody and broken, Cooper was sweet, funny, friendly and loving. And he falls for the sweet librarian, while all Gavin does is push her away.

“She was all wrong for me. Innocent where I was hardened, and sweet where I was rough. She’d want a tender lover, someone who was gentle and took his time warming her up, not some asshole who’d shove al nine inches in just to watch her gasp and struggle for breath…”

As a reader, you know this is Emmy and Gavin’s story, and Cooper pretty much knew it too, but it didn’t stop him from falling for her.

“I think you want to feel desired and experience passion, but you’re afraid to ask for it. You want a man to take control, to make you feel wanted, and you want to feel pleasure like you’ve never imagined.”

I absolutely loved the narrators, and they enhanced the book immensely.

While I really enjoyed listening to the two books, I found myself doing some eye-rolling at the amount of common tropes this book used, and the abundance of homages to Fifty Shades. From him saying “I exercise control in all things” to him being a helicopter pilot, to other things (too much of a spoiler to say) I had to look to be sure this wasn’t published four years ago. I also felt that having “Dirty Little” in the titles implied it would be a way hotter read than it was. Still, I did enjoy listening, it kept me involved and engaged, and do want to hear the 3rd in the series.

“When had she become my everything?” 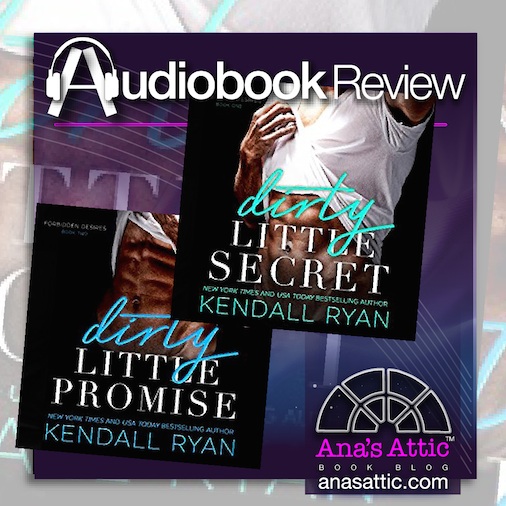