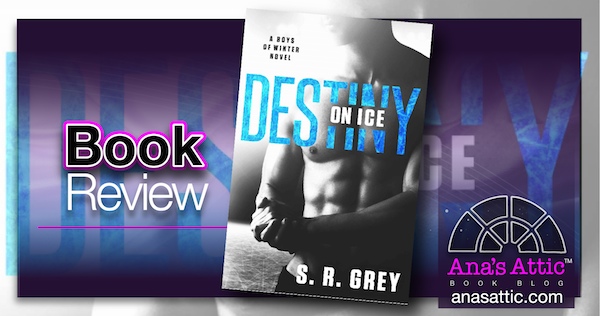 Destiny on Ice by S.R. Grey

Stands alone, but this is first in a new series. Hockey Romance.

Destiny on Ice by SR Grey was a fun and sexy, fairly low on angst enemies (not really) to lovers story. I didn’t read the blurb going in, so at first I felt a little disappointed that within the first few pages, I thought I basically knew the story. I did, but reading how it played out was a ton of fun.

Brent Oliver is a hot hockey star. He has endorsements, loads of fans, and is in high demand. But he and a couple of his teammates have started enjoying their fame a bit too much, and the girls, the drinking and partying has started to affect their game. They know they have to get back into shape before the season begins again, so they are throwing one last blowout bash at their summer home in Minnesota before heading back to Vegas for the season.

Aubrey is a life coach to the stars. She is a bit uptight, and she takes her job very seriously, traveling around the country, staying where the clients are for weeks at a time. Her next assignment is in Vegas. All she knows is it’s a hockey player. She has a few days before she needs to be there, so she visits her little sister in college in Minnesota before heading to Vegas. Little sis is a wild one, and brings Aubrey to a party to loosen up a bit. It’s been a long, long while since there has been a man, and she needs some flirt practice.

“Beneath my jeans, I imagine my lady bits making a little sign of the cross, praying to reverse the curse of the dreaded dick-drought.”

Aubrey sees a totally hot guy, and wants to stick around to find him again, but after getting a bit too drunk, things don’t exactly go as planned, and she wakes up the next morning in bed with the gorgeous guy with no underwear! Gorgeous guy in now creepy pervy panty-stealing guy.

One of the best parts of Destiny on Ice was Aubrey’s inner voice, her thoughts cracked me up! But there are a lot of things in quotes that make me think she often talks out loud to herself, which I found a little strange. It was hard to tell what were thoughts and what was spoken at times, but it was funny either way.

Of course you know what happens next…Aubrey’s assignment is none other than gorgeous, creepy, pervy panty-stealing guy.

“I hate him but my hooha disagrees”

The sexual tension keeps growing between them, until she passes a sex store while running errands. She has never done this before, and embarrassed, grabs the first two things she sees, and let me tell you, I was cracking up! An Area-51 themed sex toy is a recipe for laughter!

“Brent 51 is halfway inside me and glowing like an alien ship has just docked in my vagina. Even, er, enclosed like that, the thing is still mega-bright. So bright, in fact, that my whole bedroom is glowing an odd shade of green.”

I enjoyed that there was no instalove and they they became friends before anything else happened. It was cute that it took the threat of another man, Al, for him to step up, but the whole scene made Brent look like a fucking idiot. It went on too long, though there was a cute scene later with Al that made up for it. 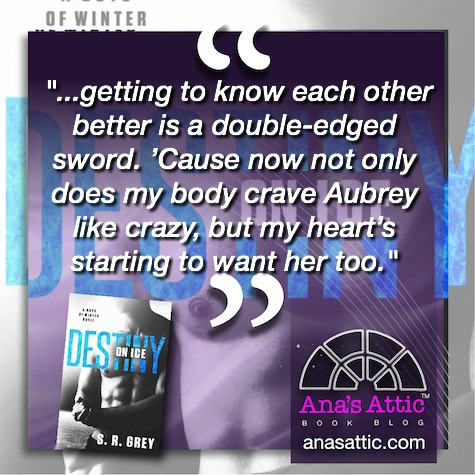 Destiny on Ice by SR Grey was a fun and sexy sports romance. Though the storyline was predictable, it was a ton of fun watching it play out. Aubrey was fun and likable with an awesome inner voice, but sometimes it seems she was speaking her thoughts out loud rather than thinking them, I wasn’t sure. I love the banter in an enemies to lovers story, and there was a lot of it in Destiny on Ice. All in all this was a light, fun read that kept a smile on my face the whole time. 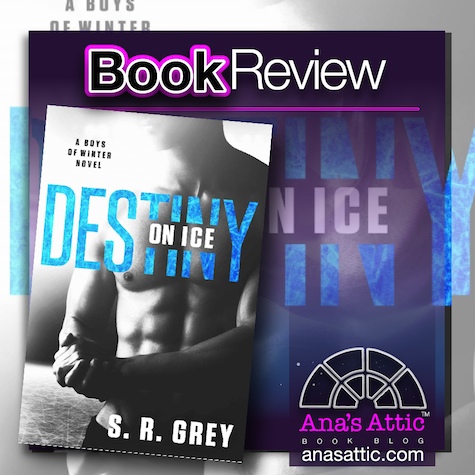