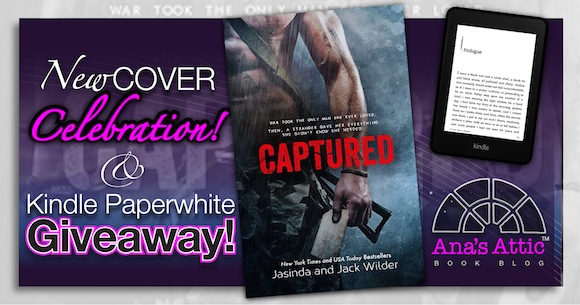 Love is never easy. It’s especially difficult when you love a career Marine. I knew the risk when I said “I do”, but I chose to love Thomas anyway.

War took him from me, and now I’m alone. Struggling and desperate. There’s no hope, no future. Just the endless cycle of day-to-day survival. But a letter returned will change all of that.

Hope and companionship, and even love, often come from the last place you’d think to look, when you least expect it.

I was a lost, broken soul, a Marine tortured by the memories of what I’d endured. When I visited that old farmhouse in rural Texas, all I wanted to do was return the letter. Keep a promise.

What I got was healing. Understanding. The chance to find a measure of peace when all I’ve ever known is war.

We both lost everything. But in each other, we found something worth fighting for.

Captured was completely not what I expected and still completely amazing. Jasinda Wilder is the Queen of Intense Lovemaking, and believe me, there was some INTENSE lovemaking. I don’t mean kinky or dirty, I don’t even mean fucking. The connection between the partners was just so strong and deep (hehe) you couldn’t help but feel it in their lovemaking.

This review will be a little different than most. I really don’t want to give anything away, so despite what I do say, I give nothing away. I didn’t even read the blurb before this book and loved it. But I want to tell you, this is not a “war romance” like Wounded (which I absolutely LOVED), but this is more about a woman in love with a Marine. It’s about what soldiers wives go through when their men are gone, it’s about what the soldiers hang on to while they are away, and it’s about the PTSD soldiers suffer from when they return. But more than anything, it’s about love. Finding love in unexpected places, and the healing power of love. It’s about second chances.

There are some AMAZING battle scenes. Any guy would like it–and I found it really exciting to read, despite my dislike for anything war. You can see there was a lot of research put into this book, and Jasinda and Jack actually make you FEEL what is going on. The detail, the fear, the sounds, the smells, it’s like you can almost feel the ground shaking from the explosions, smell the flesh burning– it’s like we are there, or at least watching it instead of reading it. I seriously read the scenes with my heart in my mouth the whole time.

“Shit, the fear is always there… So you’re afraid, every single time. If you’re not, you’re either crazy or a liar. I’m neither, so I’m fucking terrified.”

Reagan wrote her husband, the love of her life, a letter as he was shipping out on his next tour as a Marine. In the 8 years they are together, he was gone most of the time, and she really hated him leaving again.

Reagan, left with her husband’s big family farm to care for all alone, and a baby on the way, couldn’t stand for him to leave again. And then he and his friend Derek turn up missing–we know what happens as readers, but all she knows is that they are MIA.

“Why didn’t you come back? You promised you’d always come back.”

The story was heart-wrenching. Reading about Reagan trying to keep up the farm and a 3 year old all alone, with just the older neighbors for help, reading about their time as a POW–just gut wrenching.  But our hero was just that, a total hero, all the time, and Reagan’s letter, recited over and over helped keep him sane.

“I still want to live. I have to now, because I made a promise.”

Then Reagan was no longer alone, and watching the way she turned from a dirty hard-working farm-hand, back into a woman was lovely to read about.

One of my favorite things was seeing this fucked up ex POW interacting with a child for the first time, and every time after, and these scenes provided the comedy relief for a pretty heavy book.

“You captured me, and my life changed again. For better this time.” 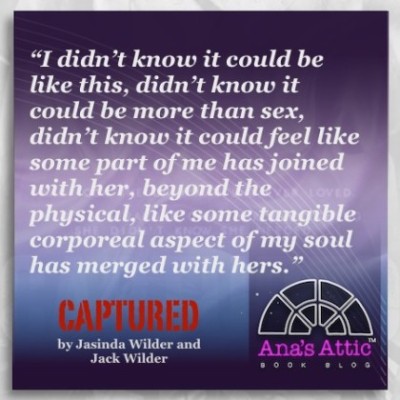 Captured was the best of Jasinda and Jack Wilder. It had the excitement, grittiness and action of war. It had a few plot twists. It had an epic romance. It had tons and tons of great sex. It was ridiculously emotional. It had a child to lighten the mood. It had really, really intelligent writing that was almost poetic at times. I’m not sure how much input they Jasinda and Jack have had in each others books, but let me tell you, this partnership worked.  I can’t wait to read the next book from this dynamic duo.

“She’s worth the whole goddamn world, even if all I can offer her is my fucked-up self.”

WOUNDED was awesome too! See my review, and though reading it is not necessary to read Captured, if you plan on reading it, do it first or it will spoil Wounded.

I asked Jasinda how she and Jack wrote this one together. Who wrote what? Here is her response:

This book was a little different than our previous projects since it has both of our names on it. We started out how we always did, brainstorming the overall idea over the course of several weeks. We’d discuss plot ideas and character names and talk through particular scenes we had it mind, and this would go on as we were driving or eating dinner or drinking morning coffee. When we felt like we’d nailed the book down to a workable mental model for both us, we let it sit for awhile, just kind of percolate in our brains for a bit as we finished other books. In this case, Captured started as a brainchild within weeks of Wounded’s publication, but we didn’t start actively plotting it until we were working on Alpha.

As for who writes which scene or chapter? Trade secret, and we’ll never tell. Mainly because by the time a book is finished being drafted, it’s all blurred together and we really couldn’t tell you.

Question: you make it sound like he has a ton of input on all of the books, was this one just more than the norm?

He does. It honestly depends on the book though so I can’t make a general statement because each one is totally different. 🙂

Do you guys…um…try out any of your scenes while writing? TeeHee—you would never get work done!

Details of our sex life is private. You can draw your own conclusions. 😉

Note: Jasinda and Jack have a boatload of kids and are the cutest couple! 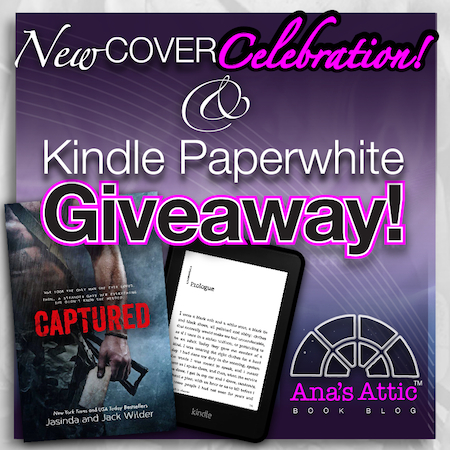