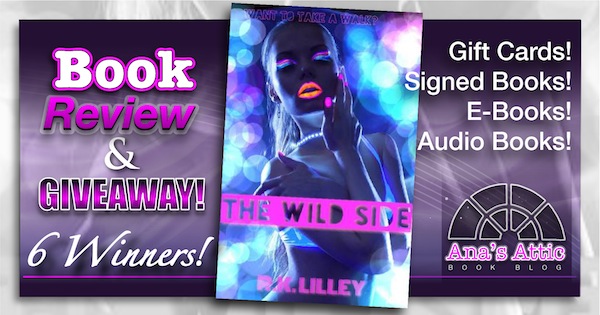 The Wild Side by R.K. Lilley

I have definitely fried some brain cells throughout my life, so when I see a novella serial, my first reaction is “No way! I can’t remember enough from one book to the next.” But when the great R.K. Lilley told me about her novella trilogy releasing over three months, I shucked all my misgivings. Because, well…its RK LILLEY!!!

The Wild Side is a departure from the previous books I have read and loved by RK. She is the Master (or Mistress?) of the alpha male romance, but The Wild Side was from the man’s point of view, and the woman was definitely the aggressor.

Alasdair Masters is a 40 year old best selling author. Since he divorced his cheating wife a year ago he has been celibate and frankly, lonely, though he didn’t realize it. Writing is a solitary job, and the only times he leaves his palatial home is to go to the gym for a 3 hour, grueling workout every day.

Over the last nine days, a beautiful young woman has been there for the same three hours as Dair.

“Way, way too young for you, I reminded myself, my furtive gaze catching on her lithe hips as she jogged her sexy little heart out.”

A friendly girl, she usually took the machine right next to him even though there were plenty to choose from.

“She always had a smile for me, too.
Maybe I reminded her of her dad. Or fuck, her grandpa.”

“Hell, she’d probably give me a heart attack. I shook off the thought. A flawless little thing like that wouldn’t give me a second glance, and I told myself that was a good thing.”

But she did give him the time of day.

“Sometimes my friends call me Dair.”
“Dair. I like that too. And are you daring, Dair?”
“Not particularly.”

As Dair tried to avoid Iris, and avoid the inappropriate thoughts he was having for ‘jailbait’, she found ways to get in his space, and invite herself over to his house after the gym. Despite Dair’s misgivings, after asking for her ID to make sure she was the 24 years she claimed to be, he took her home to ‘see his house’.

“I’m still way too old for you.”
“Your cock doesn’t agree.”
I flushed bright red. “My cock doesn’t know what’s good for it.”
“But I do.” Her voice was whisper soft.

“It was insanity, but who the fuck could resist a girl like Iris? Not me.”

As Dair gets to know Iris, he is thrilled to find out that she is very intelligent, and he can have full out real conversations with her as well as smoking hot sex. The woman is absolutely every man’s dream, and she happily fulfills every fantasy while asking for nothing in return.

“She had a mind and a motor, this one, and I found that it was just as attractive as the rest of her.”

I found myself stressed out while reading The Wild Side (that is the point!). At first, I was worried I wouldn’t like the male POV because I don’t connect as well. Then I was worried because I like my men Alpha, though Dair seemed hot in bed, his lack of confidence and daring is not my usual type. Then I was worried because I like Dair, he is a genuinely nice guy and obviously this was all too good to be true. Why doesn’t he see that? What is she after? But Dair couldn’t care less, how many times in his life would he get this kind of opportunity? Plus…he was HOOKED. And so was I.

Last, I was worried about where RK was going to leave the story, and me, hanging. I will say this, where she ended book one was perfect. And I honestly wish I didn’t read the preview for book 2, Iris, coming in late June. I think ending it without the preview would have ramped up the anticipation and surprise more. This is one book where I think the fact that it is a 3 parter actually enhances the story, and I like the idea of waiting…you’ll see why.

“These young folks, with that twerking, I thought,  just like an old fart.”

“If she had asked me to lick her asshole while she cut the lawn with her teeth, I would have agreed to it.”

I actually find The Wild Side by R.K. Lilley very hard to rate. At first, I wasn’t sure I was truly loving it. It’s not a romance, it’s a mystery with sex and a slight romance. But once I really got into it, and gave in to the fact that it’s a psychological thriller/mystery more than a romance, it became unputdownable. But since it is not a complete story, I find it hard to give a complete rating. I have a feeling that after reading the whole series, I may be coming back and upgrade this rating.

“Me, I was simple. I was order. A very neat, efficient machine that ran on nothing but air.
Me plus anyone else, well, that was another matter. And me plus Iris, that was a monster of a machine, with all gears going at different speeds, some spinning off their hinges, just going mad, but it was a wonderful madness, at full throttle, misfiring in all directions.
It felt wonderful and dreadful.
I was breaking down, and it felt amazing.
And terrifying.”

R.K. takes you for a walk on The Wild Side, and I can’t wait to find out just what the heck Iris is all about in the next book, IRIS, coming out at the end of June, and book 3, DAIR, coming at the end of July. (No pre-orders).

Purchase The Wild Side by R.K. Lilley

Paperback will not be available until all installments are released at the end of July. 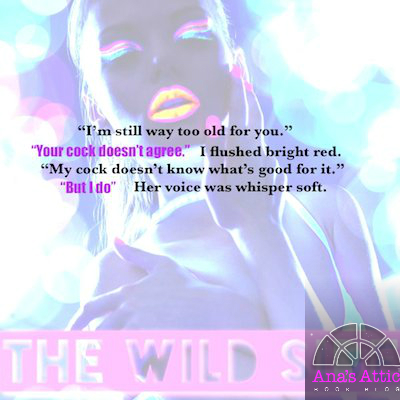 A $25 Amazon Card plus a choice of any of R.K. Lilley’s books in any format (signed, e-book or audio)

Choice of any of R.K. Lilley’s books in any format (signed, e-book or audio)