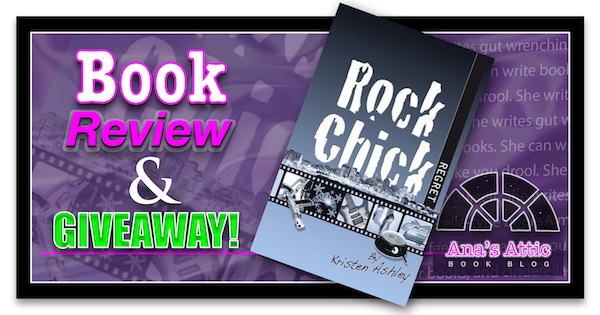 Kristen Ashley brought back perfect to this installment of the Rock Chick Series. Rock Chick Regret (Rock Chick 7) had everything I love about the series: the feeling of hanging with old friends, tons of action and adventure, an awesome alpha guy, a likable heroine that you really get to know, humor, tears, and the perma-grin that was on my face for 3 days.

“I call them as I see ‘em. He’s Hispanic…” Ralphie lifted one hand and then continued, “And he’s hot.” He lifted his other hand and then shoved them together like he was squeezing an accordion. “Hence, Hispanic Hottie.”

Hector “Oh My God” Chavez met Sadie when he was working undercover to bust her father’s drug operation. Sadie’s mom disappeared 18 years earlier, and she was brought up alone by her very cold and hard drug dealer father, who is now in prison (from Hector). Hector and Sadie had had a heated moment when he was undercover…she even tried to feed him information, but Hector had inadvertently hurt her. Almost a year later, Sadie comes to Nightingale Investigations asking for protection. The 4 Balducci brothers all want to claim her as their ‘woman’ to grab hold of the drug trade. She is sneered at by the Rock Chicks (this made me sad) and blown off by Lee.

Sadie has been known as the “Ice Princess” but it’s all a suit of armor. She has never had real friends or even any affection since her mom left. She was so used to making up who she was, she didn’t know who she really was.

Sadie broke my heart. She grew up around so much bad she thought it made her bad. Her Ice Princess shield was so thick, but she was desperate for someone to penetrate it. She was used to people looking at her with disgust. When she went to Lee, she couldn’t break her own shield to explain why she needed them, then Lee blew her off, and she was brutally attacked. Broken and bloody, she shows back up at the Nightingale garage and is brought to the hospital by Hector.

But someone was there. Hector Chavez. Hector always had feelings for Sadie, but after putting her father away, he waited for her to come to him. But after her attack, he fought tooth and nail to stay with her in the hospital. As soon as the Nightingale men saw that this fairy princess of a woman was so brutally attacked, and they noticed Hector’s attachment, they rallied the troops.

“Lee recruited men who, it turned out, had a strong ethic about women and how to treat them and an even stronger ethic about how they felt about men who didn’t treat them right. This wasn’t on the job application but, bottom line, it was the only kind of man Lee would have in his employ.”

Not only did all the Hot Bunch show up, the Rock Chicks did too. With all the care these people put out for her, the Ice Princess persona began to slip. When her 2 gay employees, Ralphie and Buddy showed up and ignored her usual coldness, she finally broke down, and ended up going home to live with the couple. (I LOVED RALPHIE!) After a month of living with the couple and having constant support and love from the boys, Sadie begins to lose the Ice Princess persona…but she doesn’t know who to be next.

Hector. Oh Hector…he was just perfect. He was a typical alpha Hot-Bunch hottie, and he knew he wanted Sadie. But after what she had been through, he was patient and gentle, not like the usual bulldoze-them-until-they-give-in alpha. He was gentle, slow and patient while still being alpha, protective, and totally hot.

“I think you’re even more beautiful and I think you’re totally lost”
“And you think you can help me find my way?”
He shook his head, his eyes went warm and I got another neck squeeze, coupled with a tightening of his arm around my waist. “Mamita, only you can find your way. I just wanna be along for the ride.”

He was patient and loving, but there was still some really hot scenes.

“Mamita,” his voice was rough with what sounded like laughter and something else altogether, “You think you could handle my mouth between your legs without you freaking out?”

And although this book was a bit darker and more heartbreaking than some of the others, there was still some really funny times, especially when the Rock Chicks get together.

“This is a Rock Chick Powow. The rules of a Rock Chick Powwow are, you gotta be a girl, a gay, Duke or Tex. No one else allowed.”
“Why are Duke and Tex allowed?”
“Who knows? Who cares? It just happened, It was organic. But now its Rock Chick Law.”

My favorite part of this book was watching Ice Princess Sadie change and grow so much throughout the book. She was so vulnerable inside, yet so strong. And when she started getting comfortable, her feisty side came out.

“Hector? You call him Hector?”
“Well, I can hardly call out ‘Agent Chavez, oo Agent Chavez,’ when he makes me climax now can I?”

This book was very focused on Sadie and her recovery and growth. I loved that this was a much more intimate story than some of the previous books. Though we got to spend time with all of the other Rock Chicks and Hot Bunch, the story was told from Sadie’s POV. And it was about Sadie healing and finding her true self.

Here is where I have to point out one of my favorite lines from Rock Chick Regret, from the always awesome Tex.

Rock Chick Regret was one of my favorite Rock Chick books. More emotional than the rest, with lots of character growth, it had everything I love in a Kristen Ashley book without being overwhelming as it can sometimes be after 7 books and 2 dozen regular characters. Hector was one of my favorites, Sadie just broke my heart and I was so happy to see her finally have a beautiful life. I spent a few hours searching for the appropriate gif or image for this post. In the end, I realized that nothing could come close to expressing this book. You just have to read it yourself. Despite my wanting to spread out my Rock Chicks so I can actually have a life, I know I won’t be able to wait long to read Ally and Ren’s book.

Story can stand alone, but is WAY better if read in order (Rock Chick Series Order)