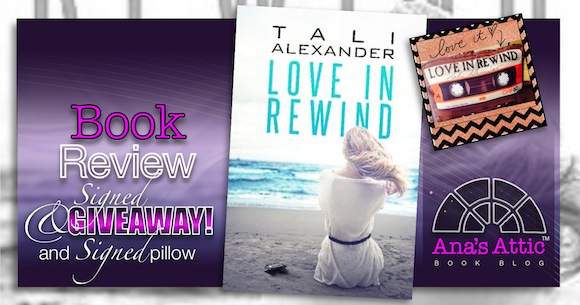 Wow, Love in Rewind by Tali Alexander was a roller coaster for me! There was so much I loved about this book, yet there were a few things that really bugged me enough to start thinking I wouldn’t rate it that well, then BAM–I was hooked to the point of forgetting to post sales and make dinner. I ended up overall loving this book, and I think my issues with it are completely different than what others had to say.

First of all, don’t judge by the cover. Although it’s a beautiful cover, it doesn’t fit the book to me. This book is HOT!!!! I mean there is a LOT of detailed sex throughout the book, but there is no sacrifice of story.  Mr. Ana was a happy man (that’s why it took 3 days to read. I was..ahem…busy).

Love in Rewind had a few very unique features that I just LOVED. If you have a choice of reading device, this is one book where I would suggest reading on a tablet or even a phone over a kindle. Why? Well this book is interactive! How cool is that? Emily and her friend Sara have their own special language–they tell each other things with the titles of songs from the eighties that would express what they want to say. Each of the titles lead to the video and lyrics of the song with just a click. It was really brilliant, and so much fun to click. Some of the pop culture references went to wikipedia as well. The book doesn’t really take place in the 80s though, the girls just love the music!

Another unique thing. We start in the present day, with 29 year old Emily thinking her ten year marriage to the love of her life is over. Then we flash back 11 years to when their love began, and the book tells the full story from there. So I read the whole book with a little trepidation, thinking that maybe they won’t get that happy ever after.

Emily is 18 and a virgin. She never did anything with anyone beyond kissing. She never even did herself. She just never found herself attracted to anyone (she grew up in private schools of NY–a pretty fast crowd, this part was a bit unrealistic for me). But when helping her older sister and her husband cater an affair, she caught sight of 29 year old host, playboy Louis Bruel (dark and David Gandy-esque but better).  *Note: I was 19 and my husband 27 when we met, so the age difference was fine with me.

“I couldn’t stop thinking about him. I was becoming pathetic and totally obsessed. I called Sara; I had to talk to somebody.
“Every Breath you Take by the Police,” I said as soon as she picked up the phone.
“Are you fucking kidding me? Have you been stalking him, you idiot? He could be married or gay or both.”

Louis booked Emily’s sister for 4 more jobs just so he could see Emily again, clearly as obsessed as she was. But she was having teenage fantasies of him, while he was all man.

“We would first take a naughty shower together and then he would carry me to bed and finger me until I screamed out his name. After that, we’d sleep happily ever after. THE END.”

As she is fantasizing while cleaning dishes at the next event, she’s caged in by Louis, saying his first words to her.

“Are you trying to make me come in my pants in front of all my clients, little girl?”

She agreed to have coffee with him in the hotel lobby. OMG, at this point I was SOOOO relating to the character!  Mr. Ana took me to a hotel on our first date (remember? I was 19, he was 27). I wanted to seem older and was too chicken to say no. I never even told anyone where I was. (Then proceeded to have an amazing, amazing night, and I was in love. That was 27 years ago).

“I was sitting next to him trembling on the inside, yet desperately trying to appear clam, cool and collected…what in the world am I doing with Louis Bruel alone at a hotel?”

But it was clear they wanted each other, and he couldn’t keep his hands off of her.

“Emily…Em…where did you come from? And what are you doing to me? I’m too old for you, but I can’t stop. I can’t think. I can’t even play it cool. I want to be inside you so fucking bad. I think I’m gonna explode.”

Though Emily was willing to do everything else (in great detail) with Louis, he held off on taking away her virginity for a long time…but it didn’t matter, these two were all over each other and couldn’t spend a moment apart from the second they met. The problem? Emily lived at home and they didn’t do sleep outs. But the charismatic guy even won over her parents. There was no doubt Emily was it for him. But she never understood it, never quite believed it herself. What would this gorgeous, rich as sin “most eligible bachelor” who used to have several women at a time want with an 18 year old virgin? (That doubt always haunts her.)

“I wake up every night thinking you’re right there with me, and when reality hits I try to go back to sleep as quickly as possible to make the night go by faster so I can see those incredible eyes again. Emily, you erase all the rest. You’re my life and you have my heart.”

I was reading a whole book about this perfect love, with an AMAZING sex life (they can’t keep their hands off of each other for years, and Tali details it) but we know there is trouble in paradise coming. So I was reading it a little heartbroken that they aren’t always perfect. But when we get back to present time, nothing was pulling me away from my iPad. NOTHING.

Though I have listed a number of dislikes, don’t let that deter you. I think the most common issues other readers may have would be the age difference between the characters and the love at first sight. But since both of those things happened to me, it was actually part of what I loved about the story, and the author captured that feeling of being young and overwhelmed by an older man perfectly. Tali told a story of a very physical love that lasted for years and was lovely to read about. Their love for each other seemed so unbreakable, so knowing from the beginning that something may happen to was always there in my mind, making it a very different type of read. Capping it off with those awesome links to 80s songs that blended perfectly with the story, and you have a unique, very hot, very addictive story! I really look forward to the next in this series! 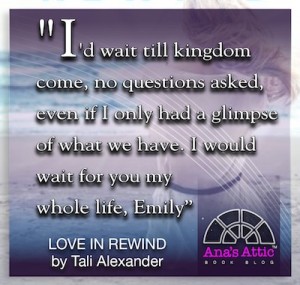 Win a signed paperback and signed Love in Rewind pillow! (US only, int’l gets an e-book) 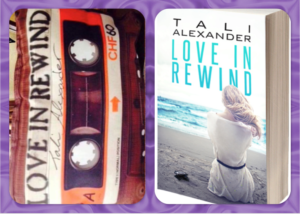