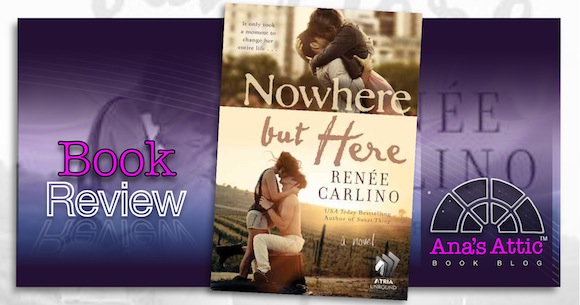 Nowhere But Here by Renée Carlino

Nowhere but Here is a beautiful, traditional contemporary romance. With all the book trends lately (rock stars, fighters and bikers, oh my!) it was nice to just go back to the roots and read a touching, sweet, true romance story again. Though it’s an average length book, it was a quick read because I just didn’t want to put it down, and I read it in one day. Was it perfect? No. Was it heartwarming and romantic? Yes.

“There’s nowhere but here. Nothing else matters.”

Kate Corbin is alone. She never knew her father, lost her mother at a young age, and has no family family left. She is friendly with colleagues at the Chicago newspaper she writes for and has a ‘boyfriend’ that she doesn’t really do much with except hook up in their building’s laundry room. She’s in a major rut. Depressed and writing crap fluff pieces, Kate’s mantra is this:

“There’s no one to take care of me, no matter how many people surround me. I’m all I’ve got.”

Following a man who preaches on the train daily, Kate learns to live by “I’m all I got”, until Just Bob, the preacher, changes things up.

“It’s a game change day for you. Visualize to realize it.” ~Just Bob

Kate’s boss offers her a huge story. Head to Napa Valley to interview R.J. Lawson, the reclusive boy genius turned vineyard owner who had disappeared after making a name for himself as a teen.

“You’ve lost your spark, Kate. Don’t come home until you find it.”

With no time to prepare, Kate is off to Napa Valley, renting a car when she hasn’t driven since the day she got her license. As she pulls into the winery, BAM. She smashes straight into one of the workers there, Jamie. Sigh…I immediately fell for the rugged, smiling winery worker as he drives her up the drive to meet RJ (who turns out to be a total douche).

Within five minutes of meeting Jamie, Kate was feeling something she had never felt before. And as he offers her a tour of the winery, she sticks to the story that she has a boyfriend. She does, but not much of one.

“Just being your friend is going to be hard, but I’ll try. It’s just that… I like you. You’re witty and sweet, and you happen to be the most infinitely beautiful woman I’ve ever met.”

After spending time with Jamie, Kate realizes the loneliness of her life and with her ‘boyfriend.’

“I wondered what hurt more: the kind of loneliness you feel when no one is around, or the kind of loneliness you feel when the person who is supposed to love you doesn’t care at all, not enough to fight with you, let alone fight for you…” “I realized in that moment that Jamie made me feel that I could be, at the very least, at the bare minimum, worth coming home to.”

When she and the boyfriend properly broke up over the phone, that left her free to enjoy Jamie. (Lucky Kate!) and their first kiss was great.

That was nice,” I said, still stunned.
“Nice?” he said in mock offense.
“Wondrous?”
“Mind-blowing,” he came back quickly.
“Spine tingling.”
“Exploding stars.”
“Intoxicating.”
“Christmas morning.”
“Chocolate Lava Cake.”
“Potassium chlorate and gummy bears” (yes, I googled it, and will be doing this this week.)

Jamie grew up lonely and had no family as well. Together, they just meshed.

“Jamie and I were two lost and lonely souls finding each other in the vast wasteland of adulthood.”

I loved seeing the instant connection. I DO believe in falling in love quickly. I knew my husband was ‘the one’ within 3 days (27 years ago).

“I woke up when I met Jamie. The world became louder, crazier, more exciting, and more achingly beautiful.”

But when a miscommunication tuns into a revelation, there was some angst that just persisted too long, and it broke my heart. Poor Jamie, I felt for him, I trusted him, and I was frustrated with Kate, first for not knowing what I knew early, and second, for not getting over it quickly enough.

“I’ll be a different man if I can’t have you. I will never breathe as deeply as I did when I was with you. I’ll never see the range of color on a perfectly cloudless sky. I will never smell anything as sweet as you or hear a voice that fills my heart up as much as yours does.”

Dislikes; (hard to do without spoilers!)

Rating: 4 Stars, 3 Heat (there was sex, even wall sex, but it was lightly glossed over)

“What started out as a journey of one girl who kept herself hidden in the darkness became the story of two souls connected and growing together in the light.”

I really did love the Nowhere But Here. I devoured it in one sitting and I ran the gamut of emotions. Renee Carlino has an incredibly vivid writing style that really lets you feel like you are there. Though I predicted the story early on, I still enjoyed reading as it all unfolded. I just get annoyed when miscommunication leads to a big drama, then the character extends the drama out of pride. I still think that this is a book very worth reading, and a few other bloggers have read it and said it is one of the best they have read all year.  If you get the sample, you’ll be sucked in, so you might as well just pick it up today. This is a published book, so don’t expect a quick 99¢ price drop. It’s already a great price.