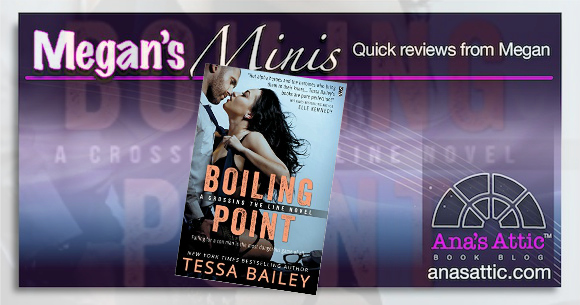 Con artist Austin Shaw’s been in disguise so long he’s not sure where his fake identities end and he begins. Now that he’s been strong-armed into working for a specialized undercover unit working with the Chicago police—criminals with unique “skills”—the last thing he needs is to risk his iron control. Especially when it comes to a certain stunningly sexy hacker who tempts him with every look of disdain.

Polly Banks will never, ever trust a con man. On the trail of a ruthless crook who destroyed the only family she’s ever known, Polly is unnerved by the shadow who follows her every move. The one who makes her pulse pound and breath short with lust. Austin. He’s infuriating, enigmatic, and pure sex appeal, and she’s determined to resist him.

But an untrustworthy man of disguise can become anyone he wants…including a man that Polly must trust if she’s to escape their dangerous game alive.

This was my message to Tessa Bailey as soon as I finished the ARC of Boiling Point:

“No words. Not one. Nothing can describe how much I love this book. I’ll be back tomorrow to better articulate how this made me feel. And there were so many feels.”

This is truly one of my most favorite series ever. The depth of the characters… The beauty of their souls… The fierceness of their love…The PASSION. This group of characters isn’t your typical heroes and heroines. They skate the edge…they are criminals in the eyes of the law…but you can’t help but fall in love with them as they search for redemption.

Austin, conman extraordinaire, has had me intrigued from the first book. I KNEW his story would rock me to my core, and he did not disappoint. In all honesty, in the beginning, I kinda wanted to hate his cocky arse. But I simply could not stop myself from falling head over heels. I just want to scoop him up in my arms and love on him until the end of time.

And sweet Polly. I fell in love with her too. The perfect yin to Austin’s yang. *Sigh* She needs control. He needs her…so he gives…

“Every encounter. On your terms. I want to be… directed by you. I want you to demand I satisfy your body, in any and every way you decide.”

I am a lover of all things alpha, so to be honest, I was a little worried about how I would feel about my hero submitting. Tessa executed this trait for Austin flawlessly. While Austin certainly submits, he is absolutely NOT submissive. He totally throws out his alpha tendencies when the situation calls for it.

“I’m going to fuck the life out of you, cruel girl. Sit beside another man? Deny me the privilege of being the one who makes you come? Your lesson was lost in my jealousy. Untie me so I can take it out on your pussy.”

“Polly is the most capable woman I’ve ever met. I never wanted to be the macho asshole that steps in and plays the hero, because she’s her own hero. And even knowing that, knowing I’d go side-by-side with her into any battle, I would accept my own death before I allowed her injury. Protecting her is something that gives me purpose, and it doesn’t listen to logic.” His penetrating stare hit her with the force of a cannonball. “She’s untouchable as long as I’m breathing.”

To top everything off, we get tons of the other characters from the series…which makes me SO HAPPY because I love them all so much!!! Bowen being his overprotective self. Erin being hilarious and so carefree…they had me hugging my kindle and giggling out loud. “Go with God, Liza.”….Effing Erin…I snorted from laughing.

This book was chock-full of laughs, love, edge-of-your-seat suspense, and steam that will set your kindle ablaze. Classic Tessa Bailey at its finest.

Boiling Point is brilliant. Incredibly unique. A devastatingly beautiful push and pull of sin and redemption… of confidence and insecurities… of control and submission. This book is simply exquisite.

Tessa Bailey, you have outdone yourself. Again. I was hungover for DAYS. And this book is definitely in my reread collection, along with the rest of the series. 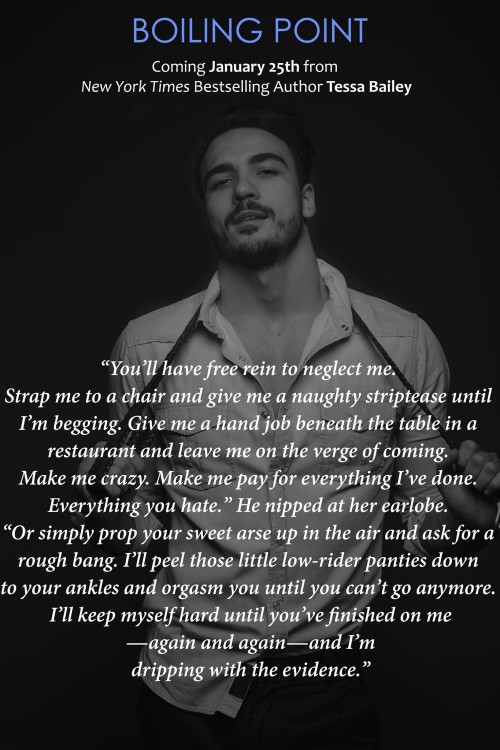 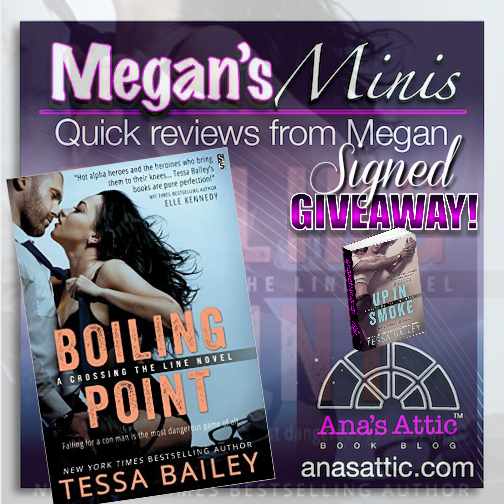 Talk books with me!