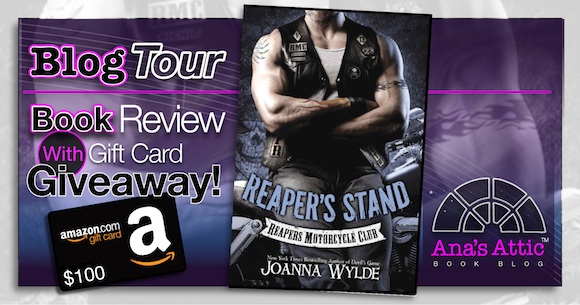 After about three books in a series, I tend to drift away because I want to expand my horizons a bit. But there are some authors and series that I stick with. Joanna Wylde’s Reapers MC are one. Reaper’s Stand is the fourth in the gritty, full length biker series, and may be my favorite.

As a mature woman with a kid about to go to college, I really appreciate reading about an older couple, especially with all of the NA out there. And Picnic, the President of the Reaper’s is an older guy I’ve been harboring a little crush on for the last few books, so I was excited to read his story.

6 years ago, Reese ‘Picnic’ Hayes lost his wife to breast cancer. She was the love of his life, and he knew there was no other for him. He had two teen daughters to raise, and an MC club fighting a war against the cartel. Club pussy was free, frequent and easy. That’s all he needed. He would never, ever have another old lady.

London Armstrong is 38, owns her own commercial cleaning company, and is raising her very reckless 18 year old cousin because her mom is a junkie. She hasn’t really had time for a relationship in 6 years, but she has been dating a local police officer. One of London’s cleaning contracts is The Line, one of the Reaper’s strip clubs, so she has some professional dealings with the Reapers. When she finds out her young cousin is getting herself into trouble over at the Reaper’s clubhouse, she calls in a favor to get into the clubhouse to get her out.

So while Picnic is ‘enjoying’ himself at the party, London comes to his office.

This bitch and her gorgeous rack have been making my life a living hell for the past 6 months, because she was the last thing I needed in my life, and I’d never wanted to fuck anyone more.
Not even Heather.
She was too nice, too clean, and way the fuck too grown up.
She’d run off screaming in the darkness if I cut loose with her.

Despite Picnic’s good intentions, since she came knocking at his door, he couldn’t pass up the opportunity.

Convince me to help you.”
“I don’t want to get involved and I don’t give a shit about your boyfriend. But I wouldn’t mind fucking your tits- that’d motivate me to help. Your call.”

London is desperate to find Jessica, so she offers a different deal. She will come and clean his house instead.

I love London’s inner voice. She didn’t even cuss, but her disgust, fascination and hormones that were at war in her head were fun to read about.

Oh, wow. He’d totally caught me checking him out. He liked it, too. I saw heat in his eyes, the kind of heat that only means one thing. This is why I shouldn’t be let out in public, I decided.

London feels safe with Picnic. She knows he is hot as hell. She has a boyfriend, but can’t stop thinking about Reese. She knows he fucks random women, she know’s he’s dangerous. 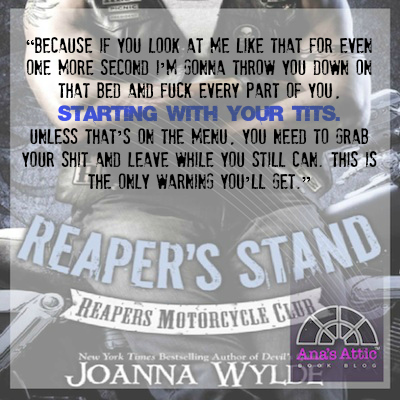 I don’t know what bothered me more, his inherent scariness or the fact that his scariness sort of secretly turned me on.”

She tried to fight her attraction to him, but it was a losing battle, the big scary guy could also be really sweet and understanding, and also really hot.

Take something off, because otherwise I’m going to start ripping things.”

We know right from the prologue that something goes terribly wrong. And we get to watch it unfold through the whole book. It was pretty cool how it was told. You know, but you really don’t. You’ll see. There was a little more exciting action in this installment, and maybe a little less relationship building, but that’s OK, it worked. London and Reese still took a while to get together, and they actually became friends first.

My cock throbbed. Literally. I felt each pulsing heartbeat hit it like a sledgehammer. I wanted to kill her. Fuck her, then kill her.

Joanna Wylde did a great job with Reaper’s Stand. I love the more mature couple that’s still totally hot and ready for anything. There was a lot of everything good: a hot alpha, dirty talking, good sex, a real relationship that develops, a gritty side story, visits with characters I love, some funny spots, and lots of action. I can’t wait to read the next in this series, and I am already counting the days until the spin-off series, Silver Valley, and the first book in April, Silver Bastard.

I shuddered, and shook my head, burying my face in his shoulder as he started working my clit harder. My hips twisted over his, grinding his cock down hard as the tension built inside me.

“Ladies first,” he whispered, then used his hand on my ass to lift me just enough for him to shove three fingers down deep inside. Holy crap. I don’t know how he pulled it off logistically and I didn’t care. All that mattered was the way he filled me up and ground down on my clit at the same time. My heart was beating too fast and I felt dizzy with need and desire and pleasure that wound so tight I thought I might explode. Oh, God… please explode! Then it hit and I bit his shoulder so I wouldn’t scream, waves of ecstasy shattering me. My body went lump over his, and he pulled the hand that’d tortured me free. Then it was at my mouth, pushing inside until I tasted myself all over him as he gripped my jaw in a soft but firm hold.

“You ready to suck my cock?”

I nodded so fast it made me dizzy. Then I slithered down his body, ripping at his jeans and pulling his belt free. he lifted his hips to help me, his erection springing free to slap up against his belly. Id seen it before, of course, but never quite this close and personal. We hadn’t had a normal courtship, and I realized with a shock that we’d only had sex three times, total. Wow. Felt like so much more than that.

A little frission of excitement raced up my spine- there was so much more about him I couldn’t wait to learn. I giggled, giddy and he grinned down at me, wrapping his fingers tight into my hair.

Joanna is a freelance writer living in Coeur d’Alene, Idaho. She started writing fiction in 2002, then took a long hiatus to explore other writing opportunities. She returned to fiction in January 2013 with ‘Reaper’s Property’, the first book in the Reapers Motorcycle Club series. 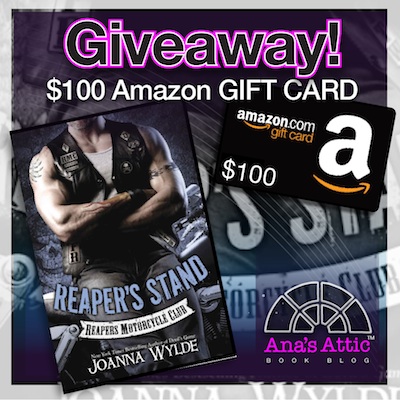