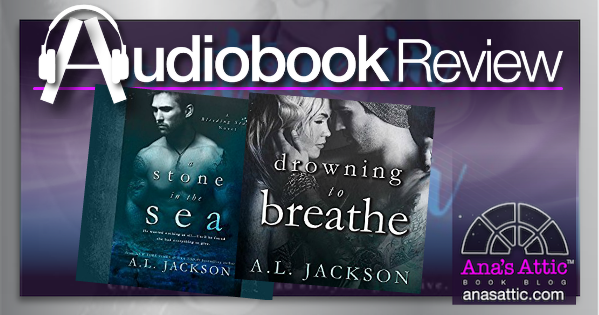 A Stone in The Sea and Drowning To Breathe (Bleeding Stars 1 & 2) by A.L. Jackson

Books 1 & 2 in a series. These two are a duet. Rock Star Contemporary Romance.

I have had A Stone in The Sea by A.L Jackson in my audible library for years. Something made me think it was a dark ugly cry NA novel, and I was never in the right mood for that. But when going through my list of authors to read at Wicked Book Weekend, I decided to go for it. What a surprise! It’s more of a rock star novel than a new adult ugly cry, but there is elements of both.

Warning: While this is book 1 & 2 of a series, it’s also a duet. A Stone in the Sea ends on a major cliffy, so have the next on hand before you even start, because believe me, you will want it.

Sebastian “Baz” Stone is the lead singer/guitarist of heavy metal band, Sunder. He is an angry guy with a short temper, so he, the band and his little brother have to lay low in Savannah, Georgia for a while.

“My fucked-up family that consisted of a bunch of guys who were just as messed up as me.”

He found a local bar and his attraction to the waitress, Shea, can not be denied. She was a single mom who had no clue who the tattooed, broody man really was, all she knew was that she was drawn to him like she had never experienced.

“What are you doing here?”
“The same thing I’m doing every night, Shea. Thinking about you and wondering why the hell I can’t stop.”

They are both filled with so many secrets, and there is a lot to uncover in this book. While the attraction is instant, the relationship took it’s time developing.

“Because she saw me.
The real me. The girl didn’t give a fuck who the world thought I was or the way other people saw me. I’d been so fearful of her knowing, of it changing what we were…how we were.
But no.
Shea reached in to touch beneath it.”

Thought this alternated points of view, I felt like I got a little more of Baz than I did Shea sometimes.

I loved how the first book was more about growing their relationship, while the second was more exciting and suspense-filled, but throughout it all you get to enjoy the growing love between the two.

“I don’t remember how to breathe without you.” 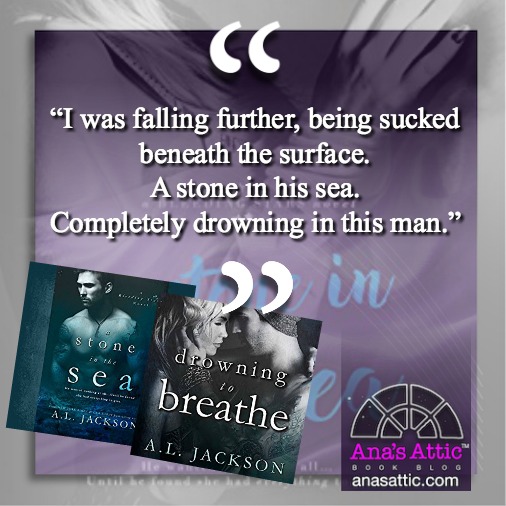 A.L. Jackson has a lyrical prose. To some, her wording may be a bit too flowery at times, but I really enjoyed it for a change and it added emotion and depth to what could have been a bit of a typical book. At first I also loved her style of repeating words. It made it feel musical. But by the end of the second book I went from loving it to despising it. It is such a powerful part of her writing and if it was used sparingly it may have been one of my favorite things about the books, but the style became so overused that it drove me crazy and took me out of the story every time. I may have enjoyed that part more if I read instead of listened, but honestly, I doubt it.

“And each time, he slipped a little deeper into my bones”

There are tons of twists and turns in this duet that you won’t see coming. Some are a little over the top, but that’s OK, I love following it all and seeing where it leads. I enjoyed that it moved to a little more of a suspense in the second book. It got so exciting I couldn’t put it down!

Sebastian York and Andi Arndt wit a slight southern accent were great in this, but they both sometimes sounded a bit more mature than their characters actually were.

I was pleasantly surprised by A Stone in The Sea and Drowning to Breathe by A.L. Jackson. These titles and the series title of Bleeding Stars made me think it was a super sad series about someone dying or something, so I was pleasantly surprised to find it is an angsty, well-written, sexy rock star romance that is filled with emotion. I definitely look forward to reading more by A.L. Jackson, and in fact, I have already bought When Lightning Strikes, the 3rd in the series.

Purchase A Stone In The Sea by A.L. Jackson 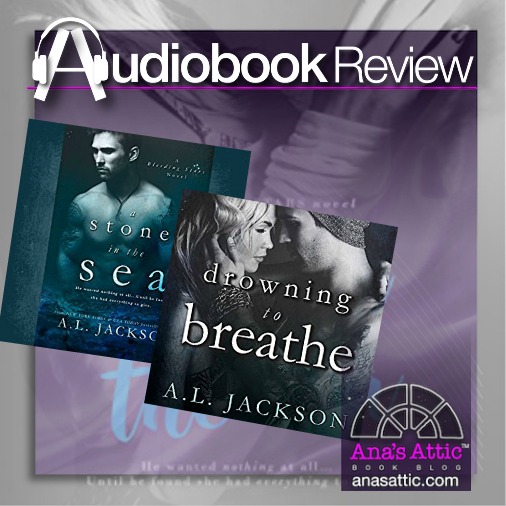