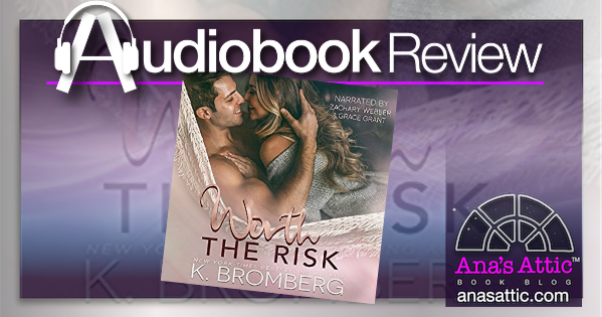 Worth The Risk by K. Bromberg

I picked up Worth The Risk by K. Bromberg not realizing it was the third in the Everyday Heroes series about the Malone Brothers. The first, Cuffed, about a cop, the second, Combust, about a Firefighter, and the third, Worth The Risk, is about a rescue pilot. I feel like it should have been called Rotor or Chopper and have a shirtless guy to go with the first two, but it was actually the first two books that didn’t match their covers, plus this title was so perfect here (I found it it was actually originally titled Cockpit). This ‘series’ isn’t really marketed as such because each of these stories stands very well alone. But they are all SO GOOD, you should definitely check them all out.

“Not all risks are bad things.”

I admit it. I have a weakness for single dad books, and I love any books with kids. Grayson is the single dad of 8-year-old Luke. He is having a rough time at work because the rescue pilot is grounded for taking too many risks to save people. This just shows he is such a good guy; he knows he is risking his career and his life but saving lives means more to him. It’s ‘worth the risk’.

Sidney’s father owns a conglomerate of magazines. Sidney wants to be editor of one of the fashion magazines, but her father sends her back to her small hometown to work on a family magazine of all things. Like, PARENTING. Something Sidney is not interested in. But working on the Hot Dad contest for the magazine doesn’t seem so bad. Grayson is the hottest of the bunch by far, and Sidney wants him to represent, but Grayson’s brothers entered him and he wants nothing to do with it. Even more so when he finds out Sidney is involved.

Luke’s mom was one of the rich kids as well as Sidney in high school. They all ignored Grayson when they came to the diner he worked at. So after the mom took off and left Luke motherless, Grayson became super careful about who is around his kid. And as hot as Sidney is, he was determined to hate her because of who she hung out with in high school.

“It’s a bad sign when you want to fuck the person you have determined you hate.”

Sidney is determined to do well at her job, and Grayson refusing to send his photos and bio to the magazine is causing issues. But she doesn’t give up on him or his photos.

This was a slow-burn romance that Grayson resisted for a long time, a little too long for me, I got a little frustrated with him judging her from preconceived notions he had in high school.

“You take risks every damn day in your job—you’ve made a name for yourself doing it—and yet, you won’t take a goddamn risk on me, will you?”

Grayson’s son, Luke, really stole the show in this book. He was so sweet and that poor kid just wanted a mom so desperately, my heart was putty for that little boy. So I did understand Grayson’s reluctance to get involved with a woman that his son would latch on to. Especially a woman who is looking to move away and work as a fashion editor, not stay in a small town with a single dad. 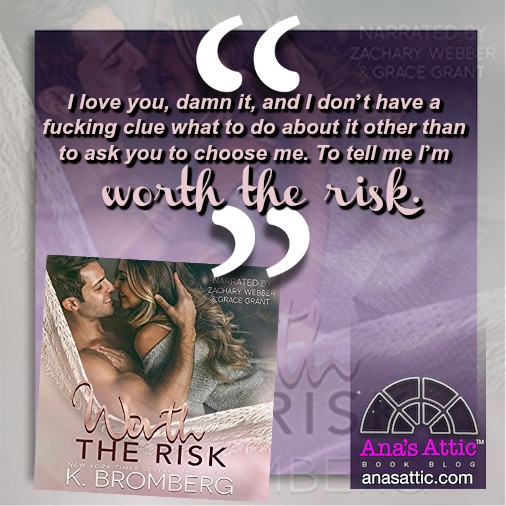 I love both narrators, but she seemed to read slower than usual in this book and I found I had to try to speed her chapters up more than his, but otherwise, I love them both and they were great for the parts.

Once again, K. Bromberg delivered a unique, sexy, engaging, and emotional read with Worth The Risk. I love a single dad book and I absolutely fell for Luke, his son. I didn’t realize at first that this is the third of the Malone Brothers books that start with Cuffed and Combust. I loved those two books and this was no different.

Purchase Worth The Risk by K. Bromberg 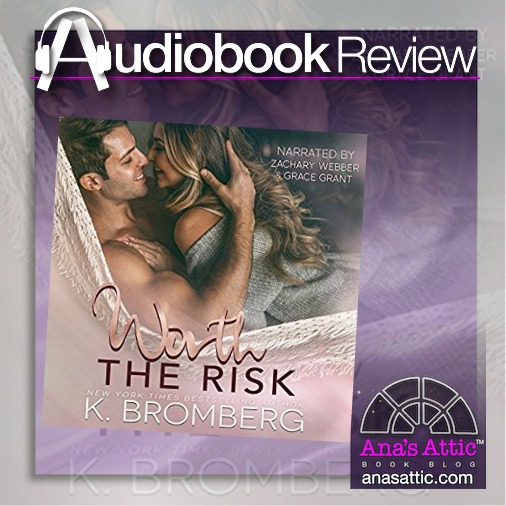