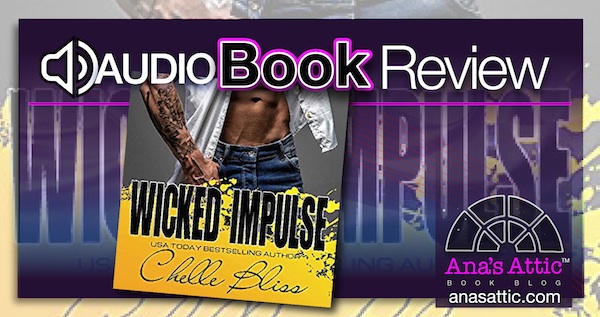 Since I like to read books in order, I fell so behind on the Men of Inked Series by Chelle Bliss that I never read anything after because I always intended on catching up. But being someone who is about to stare 50 right in the face, I really enjoy novels with older couples. Chelle assured me Wicked Impulse stood alone, so I listened to the audiobook.

I have hair that is half purple down to my waist and I act like a child myself. My husband is 8 years older than me, but we still don’t think of ourselves as “old”. We have an 11 year old, maybe that’s why, but even my sisters, who are in their mid-fifties with grown kids are totally cool and not “old” at all. So I will say that Fran, especially at first, seemed way too old for her age, especially making a few “senior” jokes. If anyone called me a fucking senior I’d kick their asses.

The narration didn’t help. The female narrator would be AMAZING in a full-on comedy, but I had a little trouble thinking of her as basically someone my age. She just seemed totally like an older Italian from the Bronx, yet she was from Florida. Think of the Nanny, Marge Simpson and Linda (the mom from Bob’s Burgers) mixed and you have Fran DeLuca. She is funny as hell, but maybe a little over the top. She actually sounded a bit like my Italian Mother-in-Law from the Bronx.

But she was a hell of a lot of fun to listen to. I think if I read it rather than listened, I would have found it sexier, but for me it was more fun because of the narration.

Bear works at Alfa Pi Security and he is a total manwhore. He has two grown kids who he loves, but only from afar. He basically gave them up when they were young because he was in a bad place, which was no place for kids. One of his best friends is his co-worker, Morgan whose mom, Fran, has just been robbed of $50,000 from a guy she was dating. The boys at Alfa Pi are investigating and trying to track the thief down.

Fran wears track suits all the time and doesn’t really care about her appearance, but when she starts working with Bear, she decides it’s time for a change and goes out shopping with her friends.

When Fran and Bear saw each other again with Fran’s hot new look, it was clear. There was no way Bear could hide his need for her.

“It was written all over his face. His attraction. His need. The want he felt for me was almost electric. Why hadn’t I seen it before?”

Bear is a badass biker who has had a shit life, the love of his life died, he is estranged from his kids, and has no real connections outside work. He’s never been in a relationship that anyone can remember, so it’s no wonder Morgan warns him away from his mother.

“He was my buddy and coworker, but Fran…She was a real woman who made me feel something for the first time in as long as I could remember.”

They were actually pretty hot together, but the semi-comedic narration stopped me from really feeling a lot of that heat. When I re-read some of the scenes in the print version when I was pulling quotes, I found them a lot hotter. Even so, I loved the couple together. I love that they have hot sex in their fifties and Bear is a total dirty talker.  But they needed to keep the relationship a secret for a while.

“There’s only one thing worse than dating a friend’s sister—sleeping with his mother.”

Fran was tough. She didn’t put up with ANY shit and had no problems expressing that.

“I don’t know who you think you’re snapping those meat sticks at, buddy, but it sure as fuck isn’t me… You don’t want to come in? Fine. I’ll meet you halfway, but you ever snap your fingers at me like I’m an animal again, and I’ll break them in your sleep.”

I honestly totally loved Fran. She meddled with no apologies and was a great mom, but was also tough and never a weak pushover. Bear was just a completely sexy alpha, and I loved how much he appreciated all of Fran’s qualities. They were great together, and the book had me smiling the entire time. 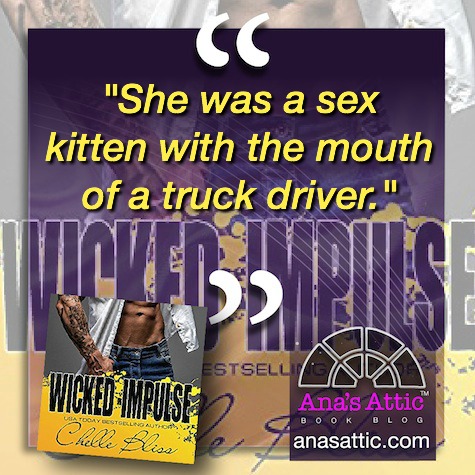 I am torn on Wicked Impulse. I love the story, but where I’m torn is whether the audio made it better or worse. I think it made the story a comedy, where if I read on kindle I think I would have found it a much sexier read with some funny moments. Fran seemed a bit older than the age she’s supposed to be, because she seemed old to me even though I’m about the same age. But I love Chelle for writing an older couple as still very sexual and HOT and including it in a series for all ages. It’s funny, the story that first made me fall for Chelle’s writing was The Gallos which is no longer on Kindle, but it was about the parents of the characters in Men of Inked who were married a long time, older, and still cool and sexy.

Sinful Intent is FREE at time of this post 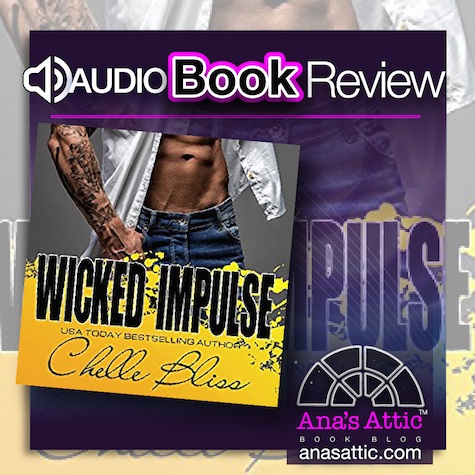