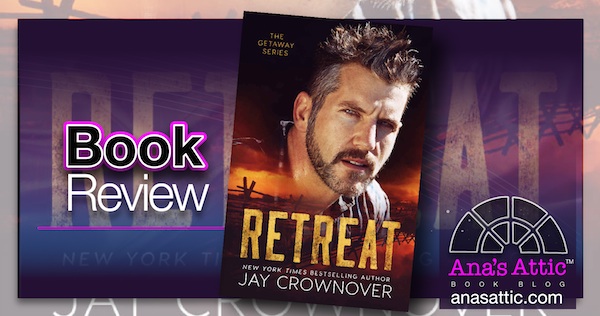 I have so many friends who swear by Jay Crownover, but because all her books are connected and I didn’t want to start at the beginning, I never picked one up (OK, I own a bunch, but never got to read them). So as soon as I saw this surprise release, Retreat, the first in a new series, I just clicked without even reading the blurb. The cover and opportunity to read a new-to-me author sold it. If I thought it was a “Cowboy” book, I probably wouldn’t have clicked. I don’t hate them but I never found one I totally love. But Retreat is more about a cowboy who isn’t a cowboy and a city girl, and I’m so glad I picked it up.

“He was the spark, but I was the flame.”

Leora (Leo) is a high powered executive who just found out that her boyfriend betrayed her in the worst way. It devastated her and made her doubt everything about herself. So her best friend Emrys signed them up for a week away from it all. A little like a dude ranch, but it’s a week in the wilderness on horses with guides. They completely rough it, even catching their own food. Leo is so not into it, but is going because it makes her best friend happy. But she still has a completely snarky attitude.

None of the three brothers did, but Cyrus, with his intimidating scowl, and almost blatant hostility were nothing like the cowboys she expected to lead them on this dangerous journey.

“He simply stood in front of me and his words, with their rasp and growl, made me shiver in both fear and awareness.”

A family with a dick of a dad, 2 men who were acting strange, and Leo and Emrys all set out the next day with two of the guides, while the third brother was meeting them in a few days. There wasn’t a huge amount of dialogue in the book. We were in Leo’s head a lot, but it totally worked for the story. The tension between Cy and Leo was palpable. He kind of acted like he hated her one minute, then gave a little flirt the next.

“Get that cute ass in the saddle and let me help you with your fucking stirrups.”

Despite taking the trip to get away from a man, Leo couldn’t help how aware she was of every move Cy made.

“Even mounted on the horse and handling the animal like it was second nature, he still didn’t look like any kind of cowboy I had ever imagined . . . he looked so much better.”

It isn’t an easy trip. Danger lurks in the woods and they are nowhere near civilization. The women need to learn to tackle their fears and they do, but during it all you can’t help but feel the pull between the two main characters. When we learn Cy’s story though, it makes you wonder if he is capable of love again.

“His story made my own seem silly and insignificant by comparison and suddenly I knew the bruises on my heart were nothing compared to the scars slashed on his.”

When things begin to heat up for them, holy hell, I wasn’t expecting that! Jay Crownover is one dirty girl!

“I’m doing what I was getting ready to do before you walked in, but now I don’t need to use my imagination since you’re standing right there.” I faltered to a stop at his words and licked my lips as his hand leisurely slipped up and down his erection.

Damn, Cyrus was one dirty talker! The couple had instant connection, scalding heat, and they just worked. But they knew that they were an impossibility. She was a city girl with a career, he was a country boy who could never leave his ranch.

We might not get forever together, but we could cram a lot into the moments we did get.

But then the adventure begins. Things get dangerous. They have to fight for their lives and prove how strong each of them are. I was on the edge of my seat turning pages so quickly! It was fun, scary, exciting, sexy and so tragic. My heart was in my throat the whole time. But despite the excitement, or maybe because of it, there was no shortage of HOT times. And it was clear that this adventure wouldn’t end without each party becoming broken and bruised, but maybe becoming whole again as well..

“Destroyed, Sunshine. This is what it feels like to be destroyed.” 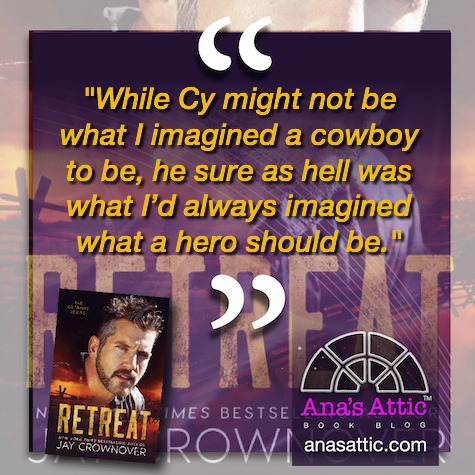 Retreat was much more than I expected. Well, I guess I didn’t know what to expect, but it wasn’t a full-fledged dangerous adventure as well as a deep, very hot romance. I love books with some adventure, so Retreat really fit the bill in a completely unique storyline. It brought out every emotion in me and left me desperate for the next book which will focus on one of the other brothers. Bravo to Jay Crownover for having the nerve to break her own mold and try something new for her. It worked spectacularly.