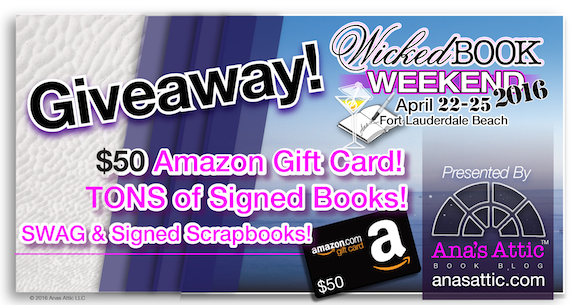 Wicked Book Weekend started in 2013 as an excuse to meet my favorite authors. At the time, there were no indie book signings. There were a few conventions, but signings weren’t really a thing. I read e-books exclusively, so I didn’t really care about signed books (that’s changed a lot) I just wanted to meet my idols.

To tell you the truth, I read Seduction and Snacks by Tara Sivec and NEEDED to hang out with the person who wrote the book. I actually wanted to hang with the 2 main characters…and I totally did! In fact, I deliberately picked a hotel with suites so I could actually stay in the same little villa with Tara Sivec! (Stalker much?) Once Tara said yes, I decided to invite some of my other favorites like RK Lilley, Katie Ashley, Raine Miller, Jasinda Wilder, Colleen Hoover and Abbi Glines. Once they signed on, Tiffany King, Sarah M. Ross, Rachael Wade, Katja Millay, Carol & Adam Kunz, CC Wood and Luke Young joined in for the fun. 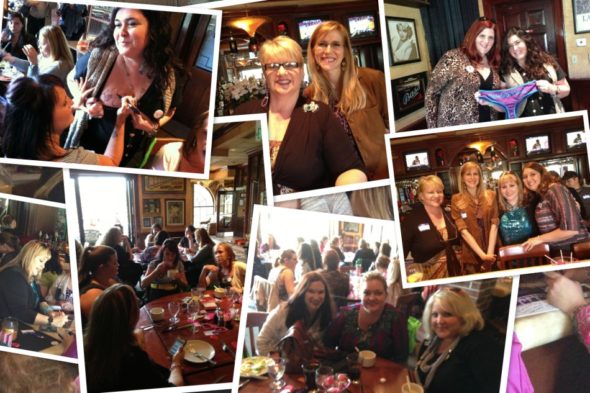 Since there weren’t any signings, I had no clue what to do. I didn’t want to line up in front of people, I wanted to hang out with them! I didn’t even realize that they would all have paperbacks and displays to set up. I had a beautiful little scrapbook printed for everyone with a page for each author that the readers brought around at the lunch. But the signing and the lunch were one in the same! What did I know? 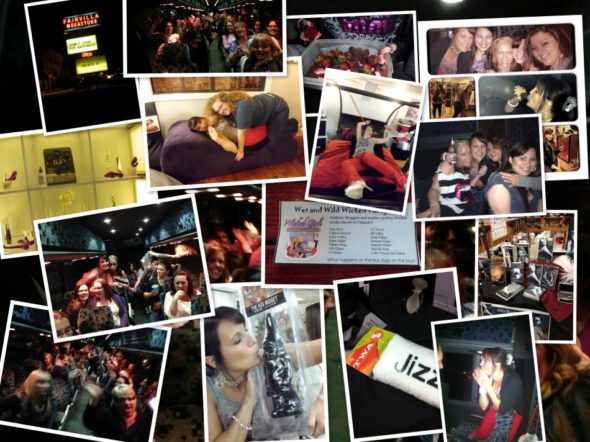 Soon after, Book Bash was announced. Since it was only a 4 hour signing, I was asked to plan an after party, and the lineup was incredible! But we realized that planning an event long distance was hard, so I decided to move the event the following year from Orlando to the beach in Ft. Lauderdale, where it has been ever since.

Though it has gotten bigger, I don’t ever want WBW to lose what it started out as. A girls weekend where we are crazy and stupid. Where we get to HANG OUT with the authors, not stand on endless lines. Where there is time to meet every single one of them. Where you make life-long friends. Last year’s dueling pianos was epic. Harper Sloan kidnapping us and taking us to see peen was even more epic. 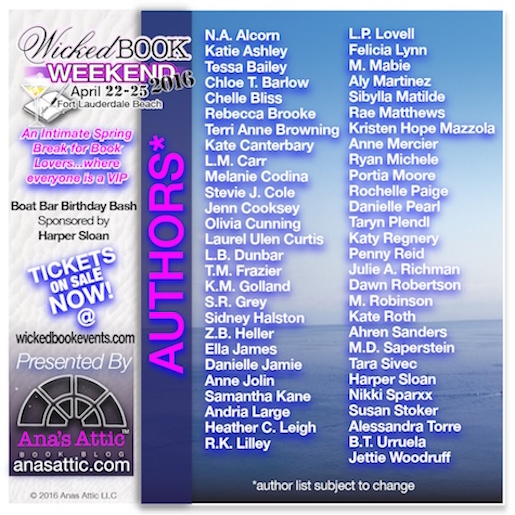 We have a Friday night comedy drag show, a Saturday signing and lunch with the authors, an after party that everyone comes to with photo booths and gummy bears (insert evil laugh here).

Wicked Book Weekend is totally not about a gigantic ballroom filled with too many authors for anyone to see. We limit authors and attendees. We make a custom scrapbook with a spot for each author, encouraging you to go to every table and meet each author. We even split the signing into two rooms and two times (before and after lunch) so you never feel overwhelmed, and have a fun break in the middle!

We have a HUGE giveaway! 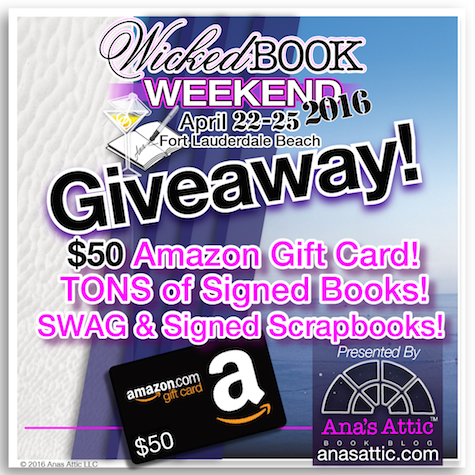 2 WBW Prize packages that include a fully signed scrapbook from the 2015 authors, a random signed paperback, a Beach Mat, a Kindle/iPad/phone stand, a TBR list and some other fun, cool swag. 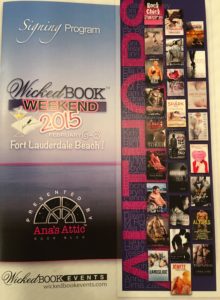 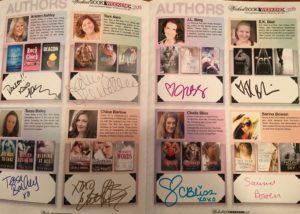 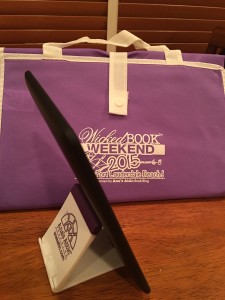 Plus prizes from some of this year’s authors including:

LM CARR: Signed copy of all three in the Giving Trilogy

STEVIE J COLE: Signed Paperback of A Love So Tragic

ALY MARTINEZ: Audiobook of Fighting Silence for the trip

RYAN MICHELE: Signed Copy of Needing to Fall and Ravage Me

KATE ROTH: Signed copy of Skip To The Good Part vol. 3 (out of print and rare)

**ALL MAILED GIFTS ARE US ONLY, (or pick up at the event)