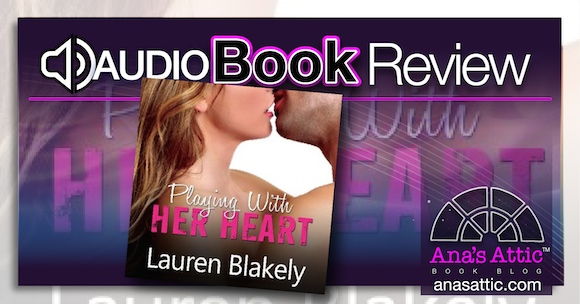 Playing With Her Heart

Playing With Her Heart by Lauren Blakely  is a really hard book for me to review. On one hand, I really enjoy Lauren Blakey’s hot dirty talkers and unique and sweet romances. But the narrators in this audiobook, especially the male narrator, completely ruined the book for me. Usually I can power through a crappy narrator and get used to them, they even grow on me. But in this case, Milo, the sexy, dirty talking male lead, sounded like he was 75. And Jill’s voice was no better. She was whiney and annoying. BUT I must tell you, I just went to Audible to find out the male narrator’s name so I know to avoid it in the future, and saw that  Todd Haberkorn got rave reviews and he narrates so many other great books! I don’t get it. My husband said the same thing, he sounded old. His dirty talking, which I usually LOVE in an audiobook, did absolutely nothing for me. Luckily, I really enjoyed the story.

Jill McCormick was an aspiring actress going for her first big broadway role. She’s been in love with the male costar for six years. Though she didn’t get exactly the role of her dreams, she still had a very important part in the show. Davis Milo was a world renown director. He was THE broadway director, guaranteed to make any show a hit.

Davis has been hurt by an actress before and will never get involved with one again. And Jill had a tragedy that made her fear relationships. But the two were explosive together.

“Something about the way he looks at me makes me want to tell him things, to open up, to share all sorts of secrets I’ve never told anyone else. His dark blue eyes are so pure and unflinching that they seem to demand nothing less than total honesty.”

Davis knew she loved the star, Patrick. But did she really? Or was it just a fantasy? Because the real chemistry was with Davis, no matter how hard they tried to fight it.

“Let me see what you look like on my stage with nothing on.”

Oh man. You might think a broadway director wouldn’t be so alpha, but you know, he’s the guy in charge.

“Touch yourself, ” he commands. “I want you to come from your own hand.”

“And how does it feel to have your fingers on your clit while I am right here next to you, and I can smell how turned on you are?”

And his dirty talking was awesome. 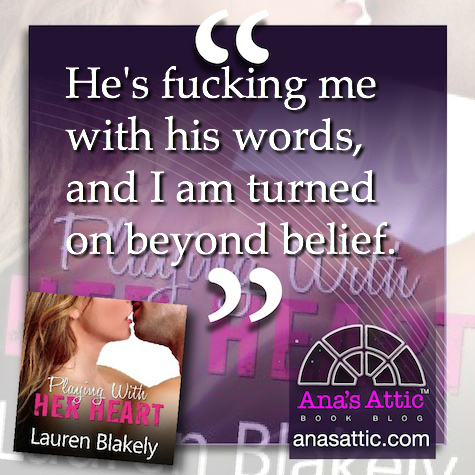 They just both had so many doubts and insecurities, but it didn’t stop them from fucking like animals. 🙂 It never felt rushed, and I liked the relationship development, but her doubts that he talks to all of his stars like that started to bug me, and it took away from the honest relationship it felt like they were building.

He nods, then presses his lips lightly to my forehead. “You are my sin.” He brushes them gently against my earlobe. “And my heaven.” Then the barest of kisses on my lips. “And everything in between.”

I love Lauren Blakely’s writing style. Just a perfect amount of heat, dirty talking, romance and alpha-ness. But in Playing With Her Heart I never fell in love with the characters. I think it may be because I really did not like the narrators. I recommend the book, but I think this should be read, not listened to. I must mention that I saw other reviewers loved the male narrator and he narrates so many other great books, but to me he sounded like an old man.

Purchase Playing With Her Heart by Lauren Blakely

Playing With Her Heart is a spin-off of the Seductive Nights Series and the Fourth in the Caught Up in Love Series. I have read several, and each of the books are only vaguely related. 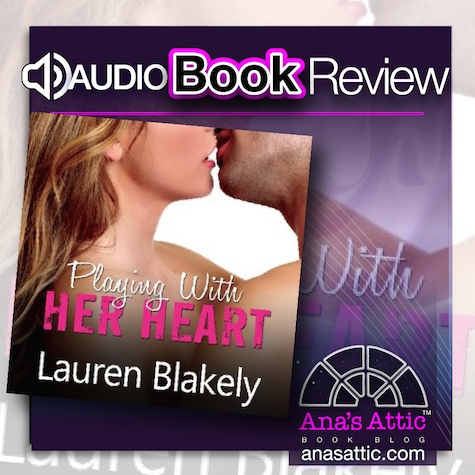