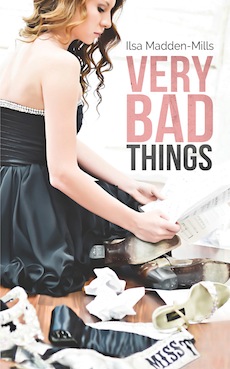 Very Bad Things by Ilsa Madden Mills has been on my radar for quite some time. September 10th is coming quickly, and I look forward to reading this one! 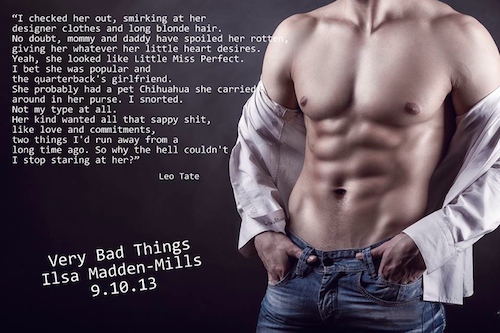 Born into a life of privilege and secrets, Nora Blakely has everything any nineteen-year-old girl could desire.  She’s an accomplished pianist, a Texas beauty queen, and on her way to Princeton after high school.  She’s perfect…

Leaving behind her million dollar mansion and Jimmy Choos, she becomes a girl hell-bent on pushing the limits with alcohol, drugs, and meaningless sex.

Then she meets her soulmate.  But he doesn’t want her.

When it comes to girls, twenty-five-year old Leo Tate has one rule:  never fall in love.  His gym and his brother are all he cares about…until he meets Nora.  He resists the pull of their attraction, hung up on their six year age difference.

As they struggle to stay away from each other, secrets will be revealed, tempers will flare, and hearts will be broken.

Welcome to Briarcrest Academy…where sometimes, the best things in life are 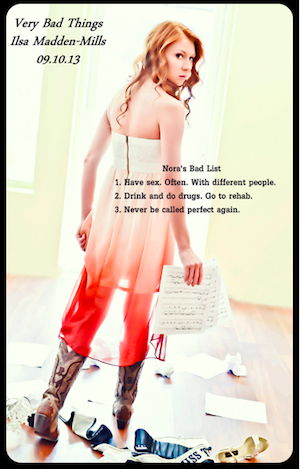 The Kiss in the Library

“I got one last request, and I’ll never ask again,” Leo said.

He set his books on a shelf and then took mine and set them beside his. He tugged me to him until our chests were touching.

“What are you doing?” I mumbled in confusion.

He put his hands on either side of my face and slid them into my hair, letting out a breath as if in relief. “Just saying goodbye, Nora.”

“You’re going to kiss me?” I asked, tears pricking my eyes at the sadness in his face.

And with that one word, I was his.

He lowered his head, his gaze holding me captive. When our lips touched, his heated eyes stayed open and mine did, too. My mouth melted into his, moaning as his hot tongue explored the details of my tongue, my teeth, my lips. We started slow but it escalated rapidly, the passion between us burning higher and higher. He owned me with his mouth, and I was lost.

I palmed his ass, grinding myself against him. He hissed at the increased pressure and pushed me back against the sturdy bookshelf, positioning me so his hips fit into my pelvis. I lifted one of my legs, and he caught it and wrapped it around him.

“Say my name,” he muttered gruffly as I sucked hard at his neck. He grunted, and I dug my nails into his back as I kissed my way around his collarbone, sucking another spot.

“Leo, Leo, Leo,” I pleaded, arching my back and pushing into him.

He shuddered. “Fucking love that,” he whispered.

He placed his lips back on mine, dominating my mouth, like a man starved. All I could think about was him, him, him . . . his lips, his tongue, his taste, his butterscotch smell. I wanted all of him, and I’d never have him, and that thought made me frantic. I gripped him tighter, pushed my nails deeper, and kissed him harder.

I never wanted to say goodbye. 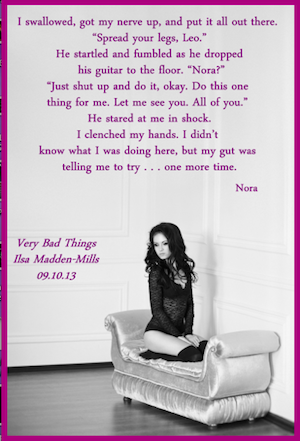 Ilsa Madden-Mills wrote her first work at the age of twelve when she penned a little ditty about a handsome prince who had no sense. Since then, she’s always written, whether it was for work or fun. When she was young, she entered every short story and poetry contest around; when she was in college, she wrote for the university paper; when she taught English, she wrote a play along with a wonderful group of drama students.

She loves to hear from fans and fellow avid readers. Check her out on Facebook or her author website.