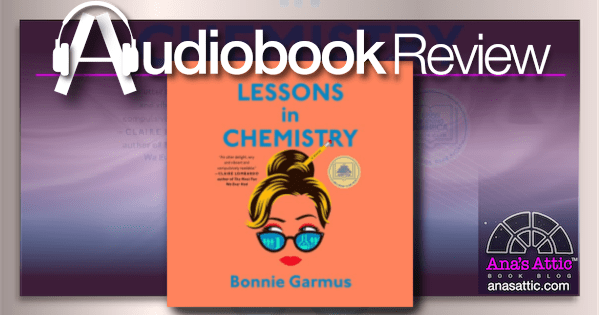 Lessons in Chemistry by Bonnie Garmus

Standalone historical fiction. Soon to be an Apple TV Series.

I often find that the books completely out of my normal wheelhouse end up being the ones I love the most. I had been going back and forth on whether I should listen to Lessons in Chemistry by Bonnie Garmus; I have seen so much publicity for it, and when I went in Barnes and Noble I saw it displayed as their book of the year. Then I heard Apple TV is making it into a series, so I decided to see if I agree with the hype, and fit Lessons in Chemistry in as my last audiobook of 2022.

At first I regretted it. I was a little bored at the beginning, and to be honest, I was slow to warm up. But as I listened more, I became more and more entranced.

“Sometimes I think,” she said slowly, “that if a man were to spend a day being a woman in America, he wouldn’t make it past noon.”

Lessons in Chemistry features Elizabeth Zott, a genius chemist in the 1950s and 1960s. Back then women didn’t have scientific careers, they weren’t taken seriously, only taken advantage of.

“Imagine if all men took women seriously. Education would change. The workforce would revolutionize. Marriage counselors would go out of business. Do you see my point?”

When she falls in love with a fellow scientist but doesn’t want to marry him, she is immediately labeled a whore, and fired from her job when she became pregnant out of wedlock.

“Elizabeth Zott held grudges too. Except her grudges were mainly reserved for a patriarchal society founded on the idea that women were less. Less capable. Less intelligent. Less inventive. A society that believed men went to work and did important things—discovered planets, developed products, created laws—and women stayed at home and raised children.”

Struggling to make ends meet, the super-serious Miss Zott takes a job hosting a new afternoon cooking show, “Supper at Six”, where they want her to be a friendly, sexy housewife. Ha! Elizabeth Zott, who turned her home kitchen into a science lab and makes coffee in beakers, is not going to play like she’s a housewife.

Oh how I ended up LOVING this book! I think I actually loved it more after reading than during. The more I think about it, the more I listen to the quotes I bookmarked, the more I fall for Lessons In Chemistry.

“Chemistry is change and change is the core of your belief system. Which is good because that’s what we need more of—people who refuse to accept the status quo, who aren’t afraid to take on the unacceptable.”

Miranda Raison did an amazing job as the quirky, formal scientist. I think it was her delivery that helped me enjoy the book so much.

Lessons in Chemistry by Bonnie Garmus is very much a feminist story and doesn’t try to hide it. Though it took me a little while to get into, I was soon sucked in and totally invested in Elizabeth Zott and her daughter and dog. You need to suspend belief for this book that takes place in the 50s and 60s, it’s an over-exaggerated chronicle of the times and women’s place in science, business and the home, but it certainly packs a punch! I loved this even more after I finished and looked at all my bookmarks. I’m so excited to see the AppleTV series based on Lessons in Chemistry and see Brie Larson bring Elizabeth Zott to life. 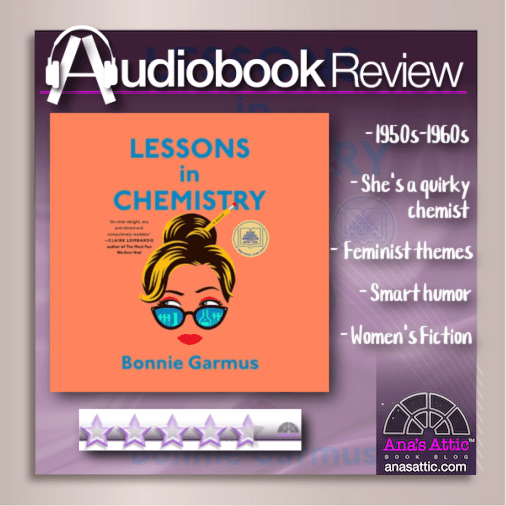