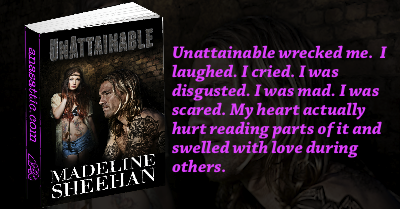 “Girls are stupid like that. Falling in love with what they can never have; the untouchable, the seemingly larger than life, the unattainable.”

Madeline Sheehan did it again. I almost feel like I can just end my review here. If you’ve read the first two books in The Undeniable Series by Madeline Sheehan, you know what I’m talking about. If you haven’t, Click here, and here right the fuck now. Seriously. Stop being a pussy and just do it.*** I PROMISE, you will come back and tell me I was right, you should have listened. Because these books are so friggin’ good…I mean so FUCKING good, that I just can’t even express it in my reviews. But you know me, I’m a whore with words, and I can’t stop myself from trying. Because in Unattainable (Undeniable 3) not only did Madeline bring us the story of Cage and Tegen, but we also get a bonus story of Dirty and Ellie.

Don’t remember Ellie? That’s OK, I didn’t either. She is Danny’s curvaceous half-black friend. In a small town in Montana, there are not a lot of people of color, and Ellie left town as soon as she could and cut ties, she couldn’t relate to Danny staying around and becoming an old lady. But when she comes back to town for her mom, she is rescued from certain death by none other than Dirty. 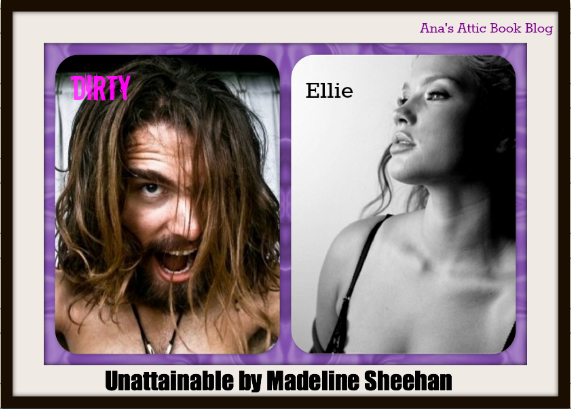 Dirty lived up to his name. Dirty inside and out, he didn’t let ANYONE touch him. His dirt and stink was his protection from the world. He has done some horrible things, yet once we get to know him, we are able to overlook the depravity and see the ‘child’ beneath the dirt. Ellie doesn’t fit in to the biker world, but her amazingly tender heart brought Dirty peace like he has never known. I loved this couple. In fact, I wish they had their own book.

“Why would a woman like you wan’t anything to do with a man like me?
“You may have done bad things,” she whispered tearfully. “But you’re not a bad man, Michael. You saved my life, and you saved my life because you have a good heart. Now I want to do the same for you.”
Dirty’s heart exploded.
He was done.
Motherfucking done for.

While Dirty and Ellie had a very big piece of Unattainable, it was mostly about Cage and Tegen. Cage is the gorgeous man-whore that is Deuce’s son. He sticks his dick into any whore he can find, and he’s getting tired of the nameless pussy. Tegen is Dorothy’s daughter. Dorothy was ‘pussy on the side’ her whole life, and Tegen grew up at the club, seeing that. She never wanted that life, so she moved away to San Francisco and turned into a hippy, complete with dreads, tattoos and piercings everywhere. As much as she wanted to totally get away from the club, she never really did. Deuce pays for her apartment, and another biker has been bunking (and more) with her.

Tegen has been in love with Cage since she had tea parties with him as a child, then lost her virginity to him at 16. When she told him she loved him, his response of  ‘it ain’t like that for me’ broke her. She became a loud, screaming shrew who felt the need to show her hate to cover up her hurt…for years. Still, every time she came home, Cage wanted her more. And she felt the same, just covered it by being a screaming bitch.

“He became the cockiest, most self-centered, self-serving, egotistical, narcissistic, and depraved motherfucker I’d ever met in my entire life.
Which, when I think back on it, is probably why I fell even more in love with him.“

They fight like maniacs whenever she comes home, and though Tegen is the exact opposite of his type, he wants her.

“Maybe because she made him goddamn crazy with her fucking bullshit, to the point where he wanted to punch a motherfucking hole straight through her pert little face. But he didn’t really want to kill her, so punching a hole through her pussy seemed like the next best alternative.”

When he finally got her to let down some of her walls,

Satisfaction roared through him. She wanted him. She still fucking wanted him. With her hair wound tightly around his hand, he yanked her head forward, bringing them nose to nose.

“You’ll always be my Teacup,” he growled. 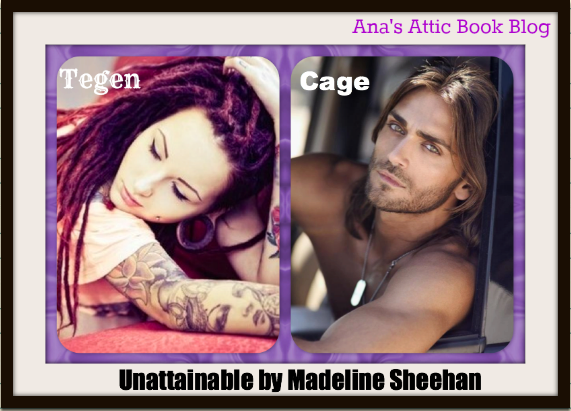 Then we have Deuce and Eva. While it was great to see them finally together in a good way, Deuce really pissed me off in Unattainable! He treats Cage like shit, and makes some huge mistakes. But I’ll always love that guy, and it was great to revisit him in this book. In fact, we get to know him so much more. We see how he takes care of everyone and always has, well, except for maybe his own family. But then…I loved him again in the end.

Madeline Sheehan’s writing has also improved greatly. The characters are richer, with more back-story. After reading Undeniable, the shock value of these books wore off, so Madeline makes up for that by delving deeper into each character’s psyche.

This whole Undeniable Series is everything I usually don’t like to read. It’s dark, twisted, scary, violent, and there is cheating. But it doesn’t matter. It’s real. NOTHING is sugar-coated. They all do drugs, including the women. They murder people like it’s nothing. Each book in the Undeniable Series has blown my mind. Unattainable has some really fucked up shit going on, and still, I loved the crap out of it.

I must say, I enjoyed Cage and Tegen’s story. I know a lot of people really didn’t like her, so they weren’t as excited for this book, but I did. I loved her insecurities and her method of covering them. I loved that despite the fact that she didn’t like what the club did, she still loved the club, as much as she didn’t want to. I liked that she was feisty and will give Cage a run for his money.

“I love your dirty fuckin’ mouth, I love the fact that you don’t hold back, that you’re tough as fuckin’ nails on the outside but on the inside you’re still my Teacup.”

But the big surprise was my love for Dirty and Ellie. Because for me, they stole the show.

“Michael,” he heard her say, her voice soft. “Please look at me and let me show you what love is.”

Unattainable wrecked me. Really. I laughed. I cried. I was disgusted. I was mad. I was scared. My heart actually hurt reading parts of it and swelled with love during others. The emotions that Madeline can pull from you as you read her stories are incredible. No other series leaves me with such a book hangover. Unattainable is the third book in the series that is at least a 5 star read for me. I read it in one sitting and ignored the world.

“But, babe, you’re the most beautiful woman in the whole goddamn world, to me. You’re all I fuckin’ want, Teacup. You got the hottest pair of eyes I’ve ever fuckin’ seen and your tattoos, babe, they’re sexy as all hell and you’re goddamn hips, fuckin’ shit, me grabbin’ onto them, fuckin’ you slow, drives me straight up crazy.”

Here is the Undeniable Series order so far:

The next books are Unbeloved, about Dorothy, Hawk and Jase, then Undying about ZZ.

***I was still in biker mode here…sorry. But I was a pussy too, scared to read them. But they were worth the venture out of my comfort zone.

I’m giving away all three books in the Undeniable Series. But if you’ve read the first two, I’ll give you a $5.00 gift card instead, plus Unattainable.