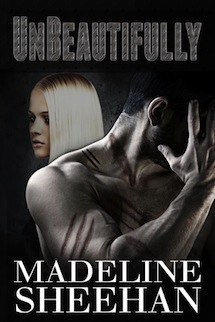 Unbeautifully  by Madeline Sheehan is the second of five in the Undeniable Series by Madeline Sheehan (see order here). Holy shit ladies, hang on, you are in for another wild ride. Before starting Unbeautifully, I went back to re-read the last chapter or so of Undeniable to refresh my memory. After all, despite Undeniable being on my Favorite Books of 2012 list, I have read quite a few biker books since then, and wanted to make sure I didn’t get confused. Then a name was mentioned I couldn’t place, so I had to go to almost the beginning to look it up. And got completely sucked in again….

I stayed up till 3:20am, finished Undeniable for the second time (totally deserved that 5+++ star rating) and I jumped right into Unbeautifully. And couldn’t put it down. This was me after reading these back-to-back in less than 2 days.

This is Danny and Ripper’s story.

“Ours was the furthest thing from a picture-perfect romance; it was more of a car crash, a metal-bending, blood-splattered disaster that left no survivors, only bad memories and heartache.
But it was ours.
And because it was ours…I wouldn’t change a thing.”

But have no fear, it is also Deuce and Eva’s story, they were a big part of the book. Cox and Kami were back and added a little comic relief to the intense ride that was Unbeautifully, and Cage is taking a step towards being our next leading man. <3

Danny is 18 and dealing with the after-math of what Frankie did to her family. Deuce isn’t handling what happened well and never comes home, and all of Danny’s friends are away at school. She’s hurting and has nobody to turn to. When Ripper picks Danny up at her prom, she’s not ready to go home.

And then he heard it. Five little words that shut off his brain and spurred his body into action. “Ripper,” she whispered against his ruined skin. “Make my prom night perfect.”

Ripper is the MC’s Sergeant at Arms and 14 years older than the 18 year old Danny. He’s also dealing with the aftermath of Frankie, in a major way. Frankie cut him up with a knife and he is covered in scars and missing an eye.

“Baby,” he said gruffly. “Man like me got no business with a girl like you. You’re nothin’ but fuckin’ beauty and I’m a whole lot of fuckin’ ugly who’s already halfway to hell.”

“You may not be beautiful the way you were before” I whispered, cupping his ruined cheek. “But you’re still beautiful. To me.”

Holy cow, when Ripper and Danny do it, they do it right! But after all Ripper has survived, he’s not sure he could survive fucking the Prez’s daughter. So they get together on the sly. And they are insatiable!

“He looked down at his flaccid cock. “Congratulations,” he said. “You’ve just fucked yourself to death.” 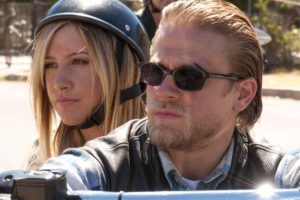 “A man like him, a girl like her…Ripper knew there would be no going back for him. Not after her. He’d hit the fucking jackpot and no bitch that came in her wake would ever measure up.”

But things got messy, really messy, and the couple was separated. And things got even worse. WAY worse.  But they never stopped the intense feelings they have for each other no matter how hard or with who they tried.

“I wanna rip you the fuck open,” he said, breathing harder as his thrusts became brutal. “I want all of me inside all of you, not just my fuckin’ cock, baby, but all of me. All of you.”

The story was told in changing points of view, from not only Ripper and Danny, but Deuce and Eva as well. I loved and hated this! I loved having more Deuce and Eva, but was sad to find that things were bad…really bad between them. A lot of shit went down between the end of Undeniable and the epilogue, that’s for sure.

I struggled with this rating a bit. I wasn’t completely blown the fuck away like I was after Undeniable, but I still thought that Unbeautifully was absolutely amazing. Then I looked at my Undeniable Rating, which was a 5+++++ star, and I think 5 is good for this installment. It had everything I love. It was raw, gritty, emotional, funny, sexy as hell, and I fell in love with every character. I can’t wait to read the next in the series.

“Ripper,” I whispered, clinging to his neck as he carried me from the bathroom into his bedroom. ” I think I love you.”

“Yeah, baby,” he whispered, sliding back inside of me. “Ain’t no other explanation for what a girl like you is doin’ in bed with a man like me.”