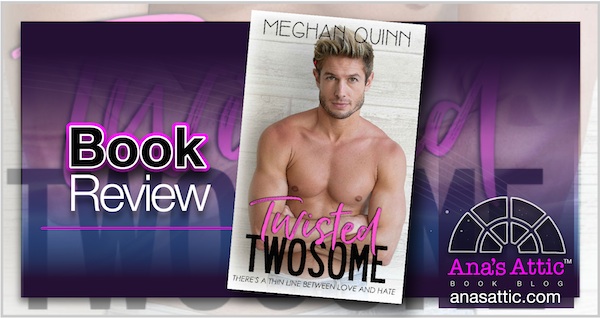 Romantic Comedy. Standalone, but related to other books.

Meghan Quinn is one of my auto-buy authors. As a Romantic Comedy lover, Meghan is one of my queens. Though Twisted Twosome can easily stand alone, I recommend you read CoWrecker (one of my 2017 favorites and a 5+++++ star read) and My Best Friend’s Ex (I loved this as well) first, as we are introduced to some of the group of friends in those books, but it is absolutely not necessary.

“I’m Racer McKay, and I wear man thongs for older, rich women while I work on simple projects around their houses. Excuse me, I mean mansions.”

Racer is desperate. Saddled with a ton of medical bills from his father, Racer’s day job in construction isn’t cutting it, so he takes some side jobs. He is just desperate enough to be a thonged handyman, but there is only so much he can take. I honestly hated Georgiana at the beginning. A spoiled little rich brat eating “chicken nuggies” in high heels by the pool with her equally obnoxious friend watching the hot construction worker and talking about how her “Daddy” stole a servant from another rich family. She’s 26 with a masters in business, but her daddy won’t let her work or move out except to help with mom’s charities. To me, Racer had her pegged from the beginning, and even though he acted like a dick as well, I had a hard time getting over my initial impression of her.

“What do you know about respect, Princess? From where I see it, you know nothing. Every weekend I’ve been here, you’ve ordered people around, watching them wait on you hand and foot, complained about not having any money, gossiped about every bad boob job in town, and have yet to be pleasant to anyone who stands an inch beneath you.”

But there is more to Georgiana than meets the eye. Her dream is to open a high-end one-stop bridal boutique in her upstate NY town. She has perfected her business plan, picked a location, and is ready to go. She just needs financing. Her trust fund doesn’t kick in for 2 years, so she has to go to daddy, who won’t budge on his belief that women shouldn’t work. So she gets a loan from her brother, but she is left no choice but to ask Racer to help her build out the store. And although these two pretty much hate each other, they are both desperate.

“Are you going to act like a snobby bitch the entire time?”
“Are you going to be an asshole the entire time?”
I don’t even blink before I answer. “Yeah. Plan on it.”
She turns away from me and flips her hair over her shoulder. “Then plan on getting a lot of shade thrown your way.”
“You’re fist-fighting with fire there, Princess. You have no idea who you’re dealing with.”
She picks up the painting tools and says, “And neither do you.” That fucking smirk, I wish it wasn’t so damn cute.

Well, of course, as they work together, a mutual attraction grows. And I started to gain a little respect for her. I love how her store is themed after little-known words. It is smart, nerdy and quirky, which really didn’t gel with her personality at first, but she grew on me. And on Racer.

“I need a penis in my life, and I need it now… Before I do something stupid like throw myself at the disgusting, pigheaded – way too hot – Racer McKay.”

But Racer knows she is totally out of his league.

“She’s refined, polished, a fucking Rolls Royce that’s never been touched. Whereas I’m the teal GEO Metro with no power steering and a flat tire that’s huffing and puffing down the street, on the verge of breaking down.”

There was lots of funny and sexy banter between the couple, but they went from just starting to flirt to fucking so quickly, I wish there was more flirtatious build-up. It was like I was just getting into the deep flirting, sexual innuendos and hot banter when all the sudden there was kind of a relationship. But Racer was totally over-confident in his prowess one minute and insecure the next, so his wishy-washy feeling began to dominate.

“I don’t like it when you sulk. No one likes a man-child.”
“Lying to yourself is only going to hurt you in the long run, Georgie. The sooner you accept your love for me, the better.” I shake my head and rest it against the wall. He’s infuriating. Twisted in a way. Hot and cold. Sweet and sour. Like he can’t make up his mind about how he wants to interact with me. 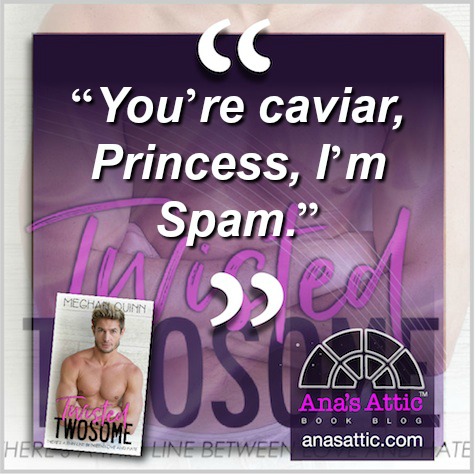 There was some absolute laugh-out-loud moments, there was some very hot & sexy moments, and there was definitely some awwwwwww moments in Twisted Twosome. But I just never completely fell for it as much as all of Meghan’s other books I have read. I still really enjoyed it and recommend it, but I think I was never able to completely get over my dislike for Georgiana at the beginning, and really never liked her best friend. I did, however, like the visits from previous characters, so at least there were some friends I loved. Still, I’d love to see more from this crew, do we get Smalls and Adalyn book next? Note: after finishing this review, I went at looked at other reviews, as I often do. Many people say this is their favorite Meghan Quinn book.

Though these aren’t marketed as a series, they are very much interrelated. The can all be read as standalone easily though. 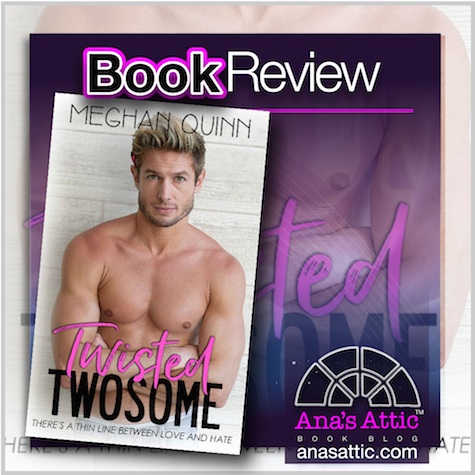