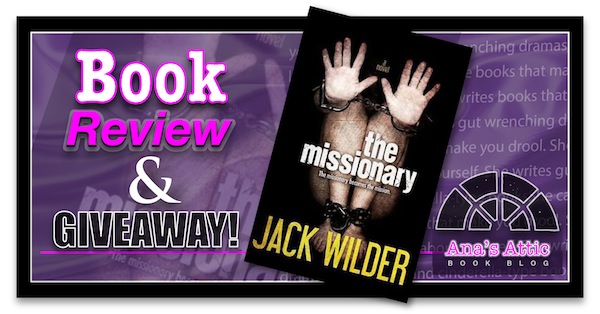 I didn’t really want to read it. But I’ve met Jack a few times, and I really like both Jasinda and Jack Wilder. The Missionary by Jack Wilder is so far out of my comfort zone, and a book I thought would totally not be my type. Yet I found myself at 3:00 am with my hand to my heart unable to stop reading, and absolutely engrossed in it.

“Something sharp jabbed into her bicep…she was floating, weightless, unable to move…she couldn’t cry or whimper, but a tear trickled down her cheek…and all went dark.
“My name is Wren Morgan. She focused on that, it was all she had, all she knew”

If you have read Wounded by Jasinda Wilder (One of my favorite books this year – my review) I would say it had a similar feel, with a little more suspense (but don’t worry, there is sex, and Jack writes it well–Jasinda is a lucky lady). The Missionary was a quick read, because honestly, you just can’t put it down. While some parts were hard to read, they NEED to be read, because sex slavery exists around the world. This could have been a depressing book, but I would definitely classify it as more of an edge-of-your seat thrill ride with romance…kind of like the Bourne Identity.

Wren Morgan is a young girl in college. Sweet and fairly innocent, she is heavily involved in her church and had barely left her hometown. She has a crush on Stone Pressfield, a retired Navy Seal who is helping at the church. Stone feels the connection to Wren, but they have such vastly different backgrounds, and he has seen so much death and despair, that he could never sully the beautiful girl with his horrific background.

“He wasn’t a good Christian. He was a soldier, and he believed because he’d seen the truth. He’d experienced death and felt the presence of God. He’d witnessed miracles…
He’d seen the worst in humanity and dealt death to the scum of the earth. He’d also seen true heroism and courage, seen sacrifice and the power of faith…
So yeah, he believed. But his faith was…beyond the narrow field that these kids experienced.”

The church decides to send a mission to Manila in the Philippines to bring awareness to, and help to victims of human and sexual slavery. Stone has been there before. He knows the dangers. He lost his friends there and the full use of his knee. He has a BAD feeling about this mission. He begs the church to cancel. He begs Wren to not go. But they don’t listen.

“You’re coming, right? You can be our security.”
“I guess I am.” Stone pinched the bridge of his nose and tried to ignore the roiling in his belly, the warning bells in his head.”

Wren was adopted and they think she is Filipino, so her reasons for going to Manila were deeper than the rest. She wanted to know her heritage. On the flights over, she and Stone got to know each other more, and the connection deepened. When they got to Manila, as hard as they were working, Stone couldn’t fight the attraction to Wren. She was always there on the edge of his awareness.

Even with Stone hovering over them, making sure they never go anywhere without him, the worst happens. Wren is snatched right off the street and disappeared without a trace. Stone knew of the slave organizations with informants and snitches all over Manila. Stone was a large white man who stood out in the poor country. Nobody would risk themselves to help a white man.

So began his search for Wren. Through some of the poorest, dirtiest places in the world. Through a mountain of garbage with shacks and shanties piled on top of each other, through a maze of trash, dirt and hopelessness, looking for any clue about Wren. Through puddles of sewage, clouds of drug fumes and fear, Stone followed leads and suspects.

In the meantime, we see snippets of Wren…locked in a pitch black hole with things crawling on her. They keep shooting her up with heroin and feeding her food that crawls. They kicked her, drugged her and beat her, but they didn’t rape her…yet. They were saving her for the highest bidder. But she held on to hope that Stone would find her.

When he did, it was a race through Manila. Here is where I couldn’t breathe, my hand was on my chest, my heart in my throat. They are literally running for their lives. After days without food and sleep, injured, they have a short rest.

Wren: “Will you kiss me again? Please?…I’m not asking for anything else. Just a kiss.”
Stone: “There is no such thing as ‘just a kiss.'”
“Sure there is”
“Not with me, there’s not.”

“I just…I just want to pretend, even for thirty fucking seconds, that it’s just you and me in a hotel room alone. Nothing else to deal with. Is that so wrong?” She wiped her eyes with both hands. “I just…I want to feel something else.”

“I know we’re both tired and hurt, but…stop holding back. Stop holding out on me” ~ Wren

And then the chase begins again…heart in mouth…edge of my seat, a clear picture in my head of the poor city. This poor couple just can’t catch a break, and there was no way I was going to sleep.

The Missionary is not for everyone. I just encouraged someone to read it and she had to DNF, but if you look at the amazing ratings, you know that’s rare. It was too much for her. For me (and I am not a fan of dark books), I couldn’t put it down for a second. It was a great change from the books I have been reading, and reminded me more of when I was reading all of the John Grisham books years ago, like The Firm, where you are on the edge of your seat the whole time…just with more sex.

Jack Wilder took what could have been a truly been a difficult read and wrapped it in an unputdownable story.  This is not a genre I want to read a lot, it was a little much for my nerves, but it was an eye-opening, exciting, sexy, raw, educational, thrilling, horrifying, scary trip through Manila that I stayed up all night to read.