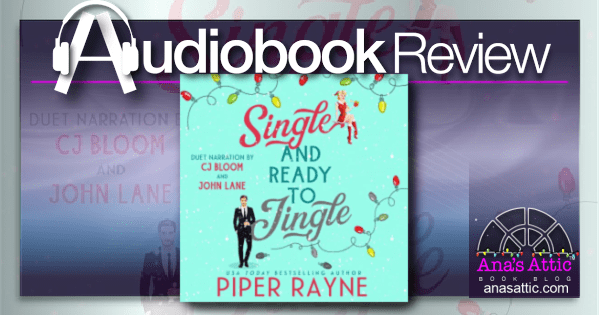 Single and Ready To Jingle by Piper Rayne

I fell in love with the cover of Single and Ready to Jingle by Piper Rayne, and I’ve liked some of their other books, so getting this was a no-brainer for me. Mackenzie was a party planner running late for a blind date. She didn’t have the guy’s number, so instead of running home and changing and showing up super late, she met the man for dinner still in her elf costume, complete with bells on her shoes. Andrew is a handsome British lawyer who hates Christmas, so when Kenzie showed up in an elf costume, Andrew was mortified, and he made his distaste abundantly clear.

They soon realize that he is her brother’s best friend, so it’s lucky that the Christmas-loving Kenzie and the scrooge totally didn’t hit it off.

“Kenzie and I could not be more different or ill-suited for one another, not to mention the issue of her being the baby sister of my best mate.”

Yet afterwards they still  kept thinking about the other, despite the first date disaster. So when Andrew’s law firm desperately needed a party planner for the Christmas party, Andrew suggested Mackenzie. She refused to help until he gave her a chance to change his mind about Christmas by doing three Christmas activities with her.

“Me being attracted to Andrew would be akin to Mrs. Claus having an affair with the Grinch.”

Despite Andrew having a good reason for not liking Christmas, I never fully got over the first meeting, even though I loved his gentlemanly behavior. The end felt rushed and a bit unsatisfactory to me, but I still enjoyed the story overall.

I love CJ Bloom, and she played the bubbly, Christmas loving Kenzie perfectly. John Lane was great as the snobby English lawyer especially at first.

Single and Ready to Jingle by Piper Rayne didn’t really stand out to me as very unique, but I appreciated that it was 100% a Christmas story, it doesn’t just happen to be Christmastime. At times I really enjoyed the book but I never 100% felt the chemistry between them, and he never totally won me over. It was still worth the credit for me, but I don’t think this will be an annual reread.

Purchase Single and Ready to Jingle by Piper Rayne 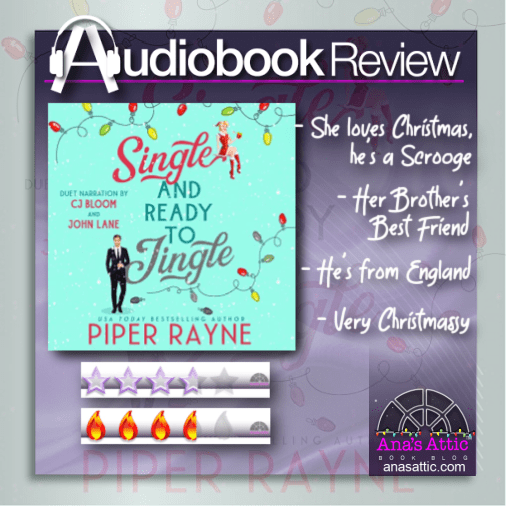