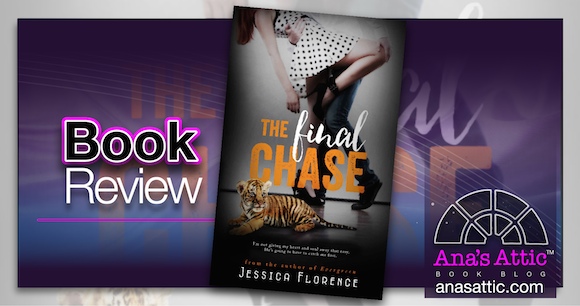 The Final Chase by Jessica Florence

I very rarely will read books in a series out of order, but I didn’t even realize The Final Chase by Jessica Florence was part of a series of standalones when I started it. It stands alone very well, but it also made me wish I read the first one, The Final KO, because A– I loved the characters and the little bit of story from book one that was discussed in The Final Chase, and B– I think I would have enjoyed The Final Chase a little more than I already did.

When I first began The Final Chase, I had a bit of a rough time. The writing style came off as a bit immature, and everything happened very quickly. But once I got into the story, I found myself really enjoying it.

Let’s start with Cammy. She is a totally funny girly-girl that I want to be friends with. She is a bit immature for her age, but that will keep her young. Her inner voice made me laugh out loud several times during the book. Cammy owns a fancy salon and spa and is all about work. She is anything but an animal lover. Animals go out of their way to avoid her or pee on her. She also can’t stand dirt, or outdoors in general. So when her niece has her birthday party at the exotic wildlife rescue, Cammy is totally out of her element. When she gets a little nip from a wallaby, she freaks out, and has to find a guy named Jake with a first aid kit.

When she finds him, she sees a gorgeous man. But then she notices something.

When he tells her to go in the back door and wait, and she thought of “back door” jokes, I knew I’d like her! lol After some flirting and banter about him biting her, Cammy decided they were just too different and didn’t pursue any more.

When her best friend says she is about to be “Arson’d” I was a little confused. Why? Because Arson is her best friend’s boyfriend, and the hero in the first book. What is Arson’d? Steamrollered into a relationship a la Kristen Ashley. Where the alpha will not take no for an answer, and he is sure this is “it” right from the start.

Cammy is blunt, a total character, over-the-top and a little crazy. But when she bumps into Jake the next night at a club, it seems like he may be the over the top one!

“I think we should explore this…I’m an animal, remember? I like the chase and I will catch my prey.” He walked us back so I was against the wall with his arms caging me in. Why was this so hot?”

They have literally said 10 words to each other when he comes out with this:

“You’re an alpha, a leader. You need a man who will pursue you for your affections, and who will prove he is the better man overall. A man who will take care of your every need. Hard. Slow. Soft. Fast. A man who gives you the world, while giving you stability. You need an equal. An alpha,” he purred and I think I just orgasmed.”

We still haven’t even hit 10% of the book yet at this point. So when I say the story and relationship started fast, I mean FAST. 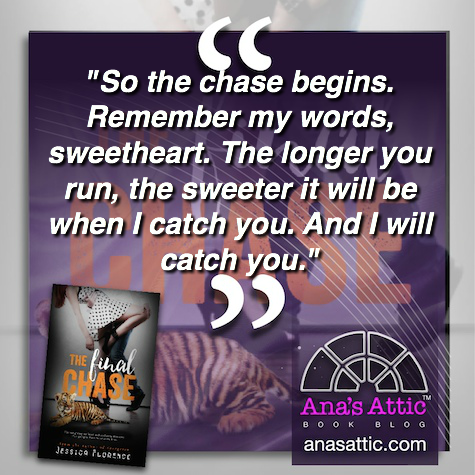 When she proceeds to get completely shitfaced and makes an idiot out of herself, Jake is there to rescue her, and he is not letting her get away. Cammy just can’t see herself with an outdoorsy, animal loving guy who is on call 24/7 for his rescue.

I love how much of this story took place at the rescue. There was a lot of animal interaction. There was also a lot of Cammy. She tended to be a little too over the top sometimes.

“I couldn’t let my pink velvet sausage wallet dictate was was happening.”

Jake and his alpha-ness was a bit over the top too, but it was hot.

And the sex was even hotter. He was totally dominant and animalistic in bed. YUM.

*OK, I can’t put this in likes or dislikes, but it’s good that emotions were brought out. At one point I was totally bawling my eyes out.

The Final Chase was a sexy, funny, sweet, crazy book with an alpha male and female. The banter and push and pull between the characters was a ton of fun, and I love a forceful alpha male. The animals played a very big role in the story, and I found myself attached to them. Since there was so much crossover from the first book, The Final KO, I think I would have enjoyed The Final Chase even more had I read that first. All in all, this is a fun read with a kooky heroine and seriously sexy alpha who loves animals. 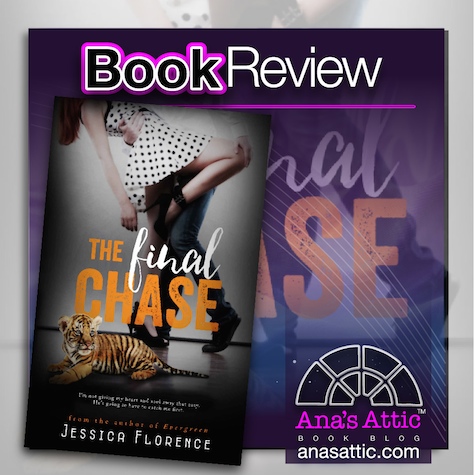