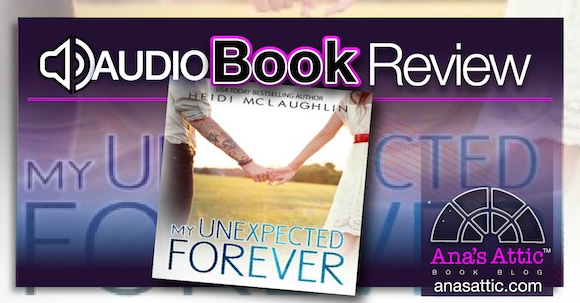 My Unexpected Forever by Heidi McLaughlin

Standalone couple, but I think you need to read Forever My Girl first.

I am so glad I stuck with The Beaumont Series despite the female narrator. I knew this time to speed it up to 1.25 from the beginning so it helped. I absolutely love books with kids. Single dads, or men who take on another woman’s kids like they are his own are my favorite male hero.

Harrison (great name, it’s my son’s!) was both of these things! Single dad, willing to take on more kids like they were his, and he is also a sexy tattooed, motorcycle-driving rock star. Yum.

One important note here. You MUST read Forever My Girl first. Though My Unexpected Forever focuses on a different couple, you were introduced to all of the major players in the first book, and their story really began there.

Katelyn (please excuse me if I spell it wrong, I listened to it) lost her husband, the love of her life, and her twin girl’s father 10 months before. She was with her husband Mason, devoted to him since she was 15. Harrison has been a single dad since Quinn was dropped off to him by his mom at 3 days old. When he moved to Beaumont to give his son a better life and live near his bandmate, Liam, he was immediately smitten with Katelyn.

“Life isn’t supposed to be like this. I’ve waited for the right one to come along, and when she finally does, she’s so torn up after losing her husband that I don’t stand a chance in hell.”

Katelyn pissed me off at times. At first, her biggest objection to Harrison was that he was a pierced, tattooed drummer. So not like her clean cut, boy next door, football playing late husband. She was so superficial at times! When she got into the real reason she couldn’t get involved, which is her love for Mason, I warmed up to her more.

“I know you’ve lost your husband. I know every day is a battle for you because you miss him. I’m not trying to take his place with you or the twins. I just want to fit into your life.”

Katelyn really fought against falling for Harrison. There was a lot of angst in this book and a lot of back and forth on Katelyn’s side. Harrison was such an amazing dad and an amazing guy, I felt awful for what she was doing to him.

“I don’t know what else to say. I shouldn’t have to sell myself to you. You either like me or you don’t . Thing is, you can’t lie. I know you feel something, you just have to let yourself believe I’m good enough to be a part of your life.”

Harrison was just a heart-meltingly good guy. I absolutely loved how he honored Mason and included his memory into their love.

“He’s a part of your life and he’s part of the girls’ life. I’ll never ask you not to talk about him when I’m not around. I’ll never ask you to stop loving him. If he was here, I’d hate him.” I shake my head because that’s not true. “No, I probably wouldn’t know you if he was here, and for that I’m both thankful and remorseful because his girls are the best, most beautiful girls that I’ve ever encountered, and I want to do right by not only them, but him too.”

I am so glad that I downloaded both Forever My Girl and My Unexpected Forever together. Had I not, I may not have listened to this one, as I really am not a fan of the female narrator. I love books with single dads, and I must say, Harrison’s and Quinn’s father-son relationship may be one of the favorites I have read. There is nothing I love more than when a man wins over the kids of his love, and seeing how all of the band families blended together was really special. 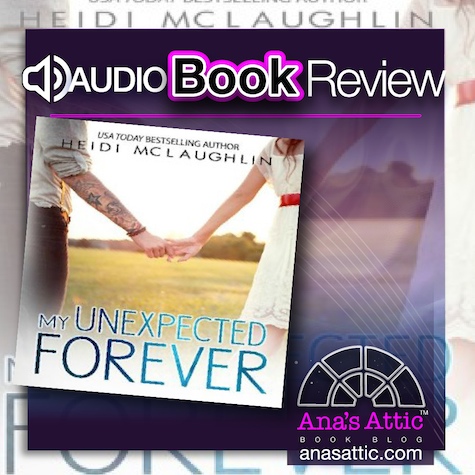