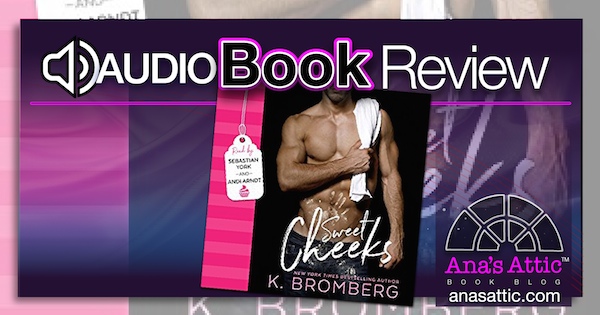 If I were asked to design a perfect book (or audiobook) for my tastes, I’d probably say a second chance romance…then I’d say, no– a Hollywood star and a regular girl. But it has to have humor, and emotion, and if it’s an audiobook, Sebastian York (YUM) and Andi Arndt reading it. So what I’m saying, is K. Bromberg wrote Sweet Cheeks just for me. Not really, but at times it felt that way!

Saylor broke things off with her fiancee 7 (or was it 9?) months ago. She just didn’t love him as much as she knew she should. Since then, she has spent all of her time keeping her cupcake bakery afloat after many of the customers she relied on were badmouthing her after breaking up with her fiancee. Then she gets an invitation in the mail. Her invitation, to her destination wedding. Only it wasn’t her name on the invite. Her ex just replaced her! Feeling hurt and pissed off, she fills in the response card with a +1, but knows she will never mail it. But her assistant accidentally did. The problem? Saylor spends so much time at her business, there is no plus one!

But Saylor’s brother, Ryder, has an idea. If she shows up at the wedding with someone more important, or richer and more handsome, she might pique the interest of the society snobs enough to come back to her store and help the struggling cupcake business he has invested heavily in. And he has just the idea who to take, but he doesn’t tell her.

Imagine her surprise when Hayes Whitley, Oscar winning superstar, walks into her shop. It’s been 10 years since Hayes, her brother’s best friend and her first love left her without even a note or a phone call, and showed up in a movie months later.

“He became my first crush.”
“Then later my first love.”
“And later again my first heartbreak.”

When they see each other, it all comes rushing back.

Trying to forget her is like trying to remember someone I’ve never met. It’s impossible.

He hurt her badly, and it’s been 10 years of radio silence, but boy, he can turn on the charm and the flirt! She knows that having a movie star seen with her will definitely get people talking about her bakery, Sweet Cheeks, so she reluctantly agrees to take him to the Island wedding as her plus one.

The way I see it, sometimes things happen in life and love’s put on hold. But if someone’s your soul mate, nothing is going to stop you from being together in the end.

The flirt builds, and the first kiss…wow.

“I sigh in relief. Then gasp out of shock. Because Haye’s lips are on mine…all I want to do is drown in his kiss. In the familiarity of it. In the difference of it. The unexpectedness of it. The comfort of it. In everything about him.”
—
“Now I know why I’ve always compared every woman I’ve ever kissed to you.”

Oh, the feels when they finally connected again! You know they are meant to be despite how much they both fight the idea. The paparazzi, rumors, his career and her career, all conspire together to push the two apart. But when they finally go for sexy times, it was hot.

“My pace, Saylor. Not yours. I’m in control now. You may own pieces of me you never even knew, but right now, I’m going to own you. Every single part of you.”

Hayes has learned a few things since high school!

One of the things I absolutely LOVE in a book is when the couple texts, Facebooks, tweets or instagrams each other and these are  some of the best ever. I spent the whole time listening to this with a huge goofy smile on my face.

“Because it’s only ever been him.”

These two have been comparing everyone else to their first love, and they didn’t even realize it. They were meant to be. 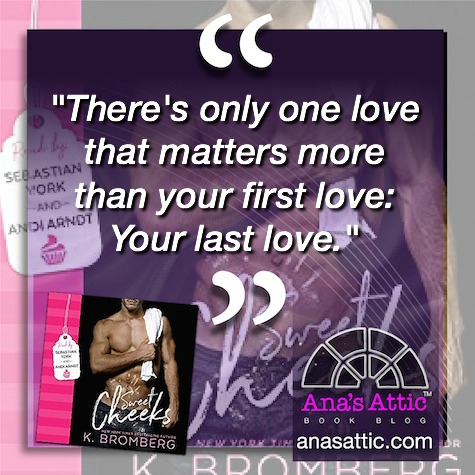 K Bromberg took two popular tropes, a second chance romance (first love), and a Hollywood/regular girl romance and made it unique, fresh, fun and sexy. I loved all of the characters and Ryder absolutely needs his own book! Sweet Cheeks is the perfect example of why I love to read. This book made me HAPPY. It made me feel good. It had me smiling throughout. It was swoony and sexy, fun and flirty, angsty and amazing and still filled with emotion. Add to that the amazing narration, and you have a total winner! 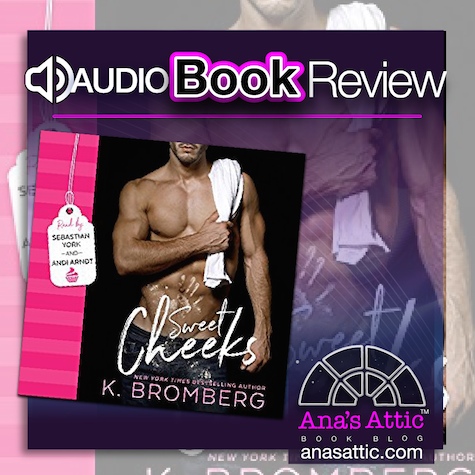