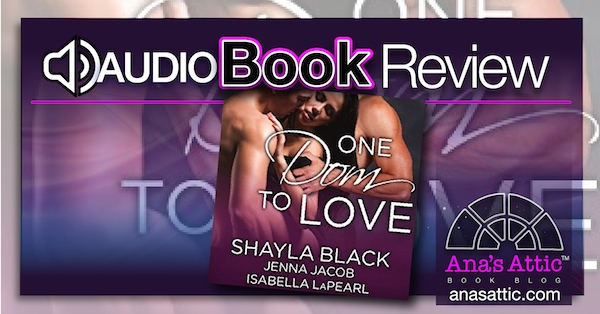 One Dom To Love by Shayla Black, Jenna Jacob and Isabella LaPearl

“Then stop holding her to you when she tries to leave.”
“It’s not that simple. Every time she walks into the room, I come to life. Every time she leaves, I fucking fall apart. I’m not trying to hurt her.”

Macen’s best friend and fellow Dom, Liam (with a sexy Irish accent) can see how much he loves her, and doesn’t understand why he tortures himself and doesn’t claim her, so he decides to push him into action and sets up a scene with Raine himself. What he didn’t expect was to fall for her.

“You and I will spend some time together, just the two of us, until we share an understanding. Do you hear me, Raine? I was as clear as I could be yesterday when I told you that you were mine and I would not share you with another.”

To me, Hammer was a pussy and I didn’t see any Dom-like qualities. But Liam, he’s a good Dom. The problem? Raine still loves Hammer, even though he plays this push/pull game with her. But boy, Liam can light a fire in her!

Every kiss between them was fireworks and rocket launchers. God, he felt incredible. Hot, muscled, persuasive, determined. He kissed like a god. With one seductive whisper, he could distract her utterly. One touch, and she felt her defenses crumbling. But those lips could capture her soul. Yes, she loved Hammer, but…Liam set her on fire.

I can’t quite put it into words, but this book didn’t really make me fall in love with it. It felt a little traditional and old fashioned, kind of like one of those “bodice ripper” novels (they even used the word ‘turgid’ twice). After 4 hours of just not getting into it, I actually put it aside and listened to another book. I thought maybe I just wasn’t in the mood, but the other book really captured me fast. Once I came back to this, I enjoyed the second half a bit more than the first, until it kind of had a cliffy end!

One Dom To Love has amazing ratings, but for me it was just OK. The beginning was slow, and the whole book felt a bit old fashioned. I didn’t expect it to be a love triangle, but rather a menage.  I also expected a bit more BDSM and there really wasn’t much. It also didn’t really end with this book, there is a mild cliffy. I rarely put aside a book but in this case I took a break and listened to another book and came back to it, which just shows you I wasn’t totally hooked. Don’t get me wrong, I liked it, but never fell near the ‘love it’ rating.

Purchase One Dom To Love by Shayla Black, Jenna Jacob and Isabella LaPearl 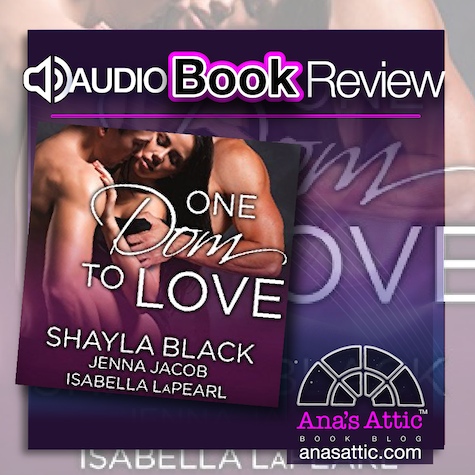