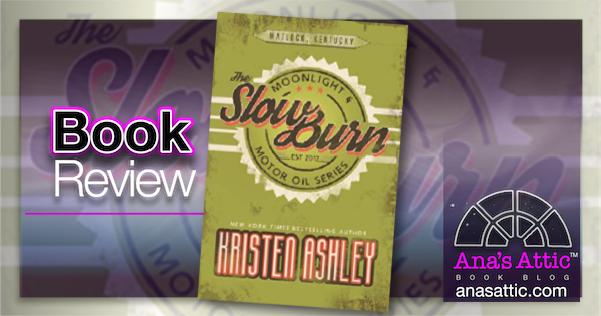 Though it can stand alone, it should be read in order. Contemporary Romance.

Kristen Ashley….HOW DO YOU DO THIS? The Slow Burn was EVERYTHING. Let’s get this out in the open now. Kristen Ashley is my favorite author. So much so that she has her own rating scale in my mind because I love them all. But there are a number of her books that truly stand out as a favorite. The Slow Burn is one of them, and as I write this review and re-read the quotes, tears are rolling down my face again. 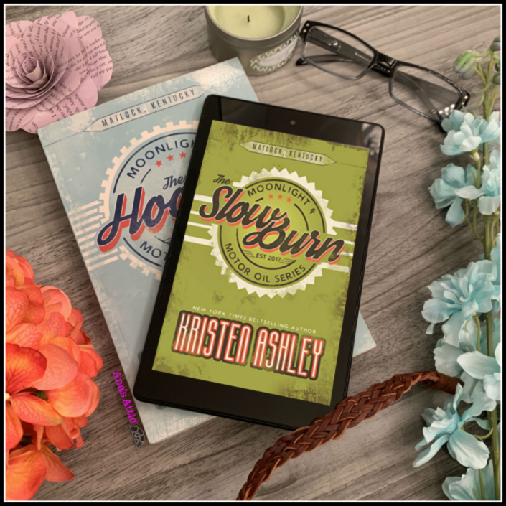 “We so totally fit.”

“Take ’Em and Leave ’Em Toby and Wild Child Addie, a match made in heaven.”

Toby and Johnnie’s mother left them and their dad when Toby was only 3. Toby spent the rest of his time watching his father suffer the loss of the love of his life. Luckily they were blessed with family friends, Margot and Dave. Toby and Margot’s relationship was one of the most special ones I’ve read, and she shaped him into the gentle, loving alpha he is today.

If you read The Hookup, you know that Toby found the right one the minute he laid eyes on Addie and her son Brooklyn. But she had just left her husband, so they just became friends and family. But the attraction was always there…simmering away, until the simmer became a boil.

“Give them time and a situation that was not extreme—like both of them wanting to go there for seven months, nursing a slow burn, they blew on it, and it became an inferno—it was likely to take the phenomenal of what they’d just done to fucking cosmic.”

Addie and Izzy grew up poor but happy. And both of them are stubbornly proud. Addie was a single mom barely scraping by and desperately needed help, but her pride stopped her from asking, or even taking what was offered in her attempt to be as strong as her late mother. I loved Addie and her stubborn pride, but I really loved how their mom, Daphne, played such a beautiful role in the story even though she wasn’t with them anymore.

“I wish Mom could put her hand in the hand of a Gamble man. Mix moonlight with motor oil.”

Toby was a protective alpha but Margot and Dave taught him how to treat a woman. and after Johnnie’s bossy “you come and kiss me” ways, Toby was much easier, and he isn’t the bossy caveman you find in most of Kristen’s books. Margot raised these boys to be gentlemen.

Whoa…yes, surprise! That was a Kristen Ashley alpha! There were no games. There wasn’t a lot of angst, and there was a whole lot of emotional sweetness.

“This was the best day ever. Maybe it was even better than the day I had Brooklyn. Because that day, I got Brooklyn. But this day, both my boy and I had everything.”

The Slow Burn had everything I love about a Kristen Ashley book including the beautifully detailed descriptions, but there was something different; it was a family-centric story with a message I really took to heart. It’s about appreciating the little things, it’s about family, whether blood-related or not; it’s about friendship, it’s about accepting help from those who love you, it’s about stopping to admire the moonlight and catch snowflakes on your tongue, and I think I may have cried harder reading this than any other Kristen Ashley book. 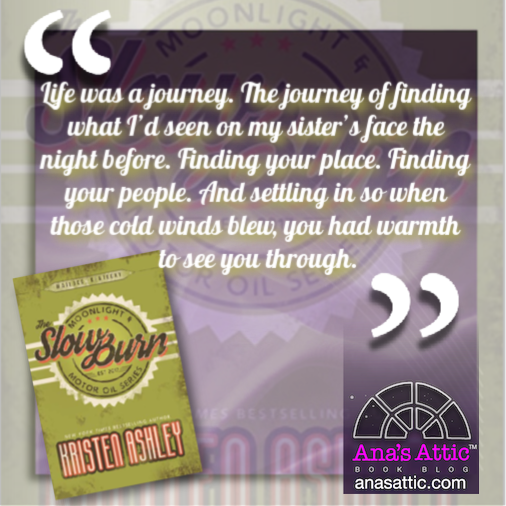 “I wonder what the poor people are doing?”

Sigh…I know I know, you all don’t want to keep seeing raving reviews. Maybe you assume that because she is my favorite author I give an automatic 5 stars. I went into this with a pledge to write shorter and more critical reviews, and then Kristen Ashley proved to me why she is my favorite and surpassed most of her other stories, which is saying a lot. The Slow Burn is Kristen Ashley at her finest, mixing friends, family, romance, alphas, sex and tons of emotion into one hell of a read. For those of you that still say they prefer Kristen Ashley’s older books, The Slow Burn reminded me of The Burg Series in many ways, and I think this one will bring you back to loving her writing. I loved The Hookup as well and absolutely think they should be read in order to fully appreciate The Slow Burn. The second the audiobook releases I am jumping right back in to experience it all over again, and I will update this review with notes about the audiobook narration.

A Gamble man went after what he wanted, locked it down, and then…onward.

“Listen, I’m not saying anything against Toby,” I spoke into her silence. “I get it. He’s not into me. That’s understandable. I am baggage. And Deanna, you have to remember, I watched this kind of thing happen with my mom over and over again. After my dad, she looked for love. She had an open and hopeful heart. She wanted that for herself. She wanted stability for her girls. And she got knocked down again and again by guys who wanted in her pants but wanted nothing to do with some other man’s kids. At least Toby’s honest about it. That genuinely says good things about him. Really good. And I appreciate it.”

This was a total lie.

I did not appreciate it.

I was attracted to Toby Gamble.

I wanted to taste his mouth and other parts of him.

I wanted to feel his skin and see what his body looked like under those tees and jeans.

I wanted to fuck him. I wanted that to be wild and intense and so enthralling, the world ceased to exist, all of it, except what we were doing to each other and how it was making us feel.

I wanted to sleep beside him.

I wanted to wake up next to him.

I just wanted him to hold me.

I wanted Brooklyn to grow up with a man like Toby Gamble. Not just as his somewhat uncle who would lift him high and make him fly or let him crawl all over him when we were at a diner eating burgers just because me and my son were there, and he was a decent guy who liked kids. But as a guy who was always there, eventually showing my boy the way in matters his mother could not.

I wasn’t in love with him.

But I knew if he gave me even the barest hint he’d even think of going there with me, I’d take that fall.

And when I did, if it didn’t work, I also knew it would annihilate me.

The Hookup Audiobook is in the Audible Romance Package, or you can whispersync for $1.99 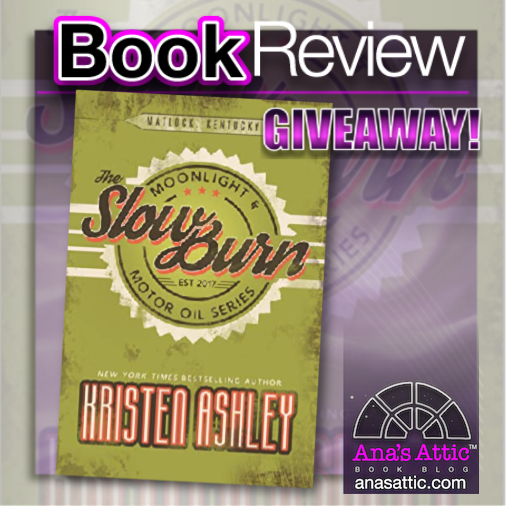