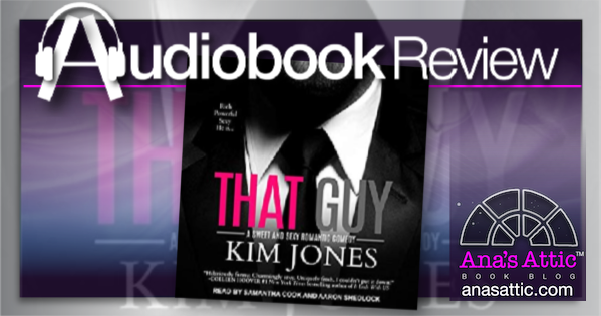 That Guy by Kim Jones

I listened to That Guy by Kim Jones a few weeks ago and started the review but never finished it because I was waiting for Raegan to finish so we could both weigh in. But now, going back a few weeks later, what I mostly remember is laughing out loud at the silliness. I would say this falls near the top of the lists of RomComs where I literally laughed out loud through the entire book. In fact, it’s near the top because it’s admittedly over-the-top. If you know that going in, I think you will appreciate it so much more, because That Guy is a caricature of all the modern romance novels. 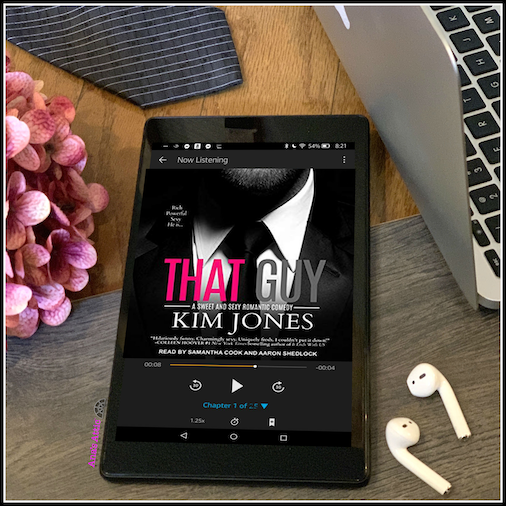 Penelope is a romance author struggling to pen her first book. She is also partially crazy (but in a funny way). Jake Swagger is “That Guy”. You know, ‘that guy’ in every romance novel—rich, hot, bossy, aloof (at first), and of course, amazing in bed.

He’s no longer fighting his smile. “So what did I do wrong?”

“You pulled your hand out of my pants and wiped your fingers on your pants like they were damp due to condensation from your water glass, rather than the sweet, sinful, innocently sexy kryptonite honey flowing from my vagina.”

There is a very fine line between silly funny and over-the-top funny and That Guy straddles the line. Penelope is ridiculous, but in a funny way. I think that if you don’t get that this is poking fun of the romance genre in a cute, inoffensive way, you will probably say it’s over the top.

“Mother of fuck, woman. You’re like a goddamn fungus!”
I smile. I can’t help it. “Because I’m growing on you?”

Penelope was a bit exhausting, and I felt like she took a bit too much shit from Jake. I loved how she just wanted him to act like a book boyfriend but he never did what she expected.  The sweet moments, however, were completely worth waiting for.

“I’m not easy to love, Jake.”
His deep, rumble of laughter can be felt in my toes. Then, in a voice as equally sincere as his gaze, he tells me a truth that rocks my damn soul. “Loving you is the easiest thing I’ve ever done.”

I think that Samantha Cook was really great for this. She made the book even better with her delivery, and she had great comedic timing. Though Aaron Shedlock is listed, he was more of a guest, only in the epilogue. I was a bit disappointed because I expected a dual narration book.

You have to realize going in that THAT GUY is satire. It makes fun of all the romance novel clichés and the romance genre as a whole but in a fun way. Penelope was over-the-top absurd, but she totally made me laugh, though I think it got to be a little much by the end. Jake Swagger (see? Satire.) was a bit too much of an asshole sometimes. Sometimes I just wanted him to be That Guy, you know? I also don’t feel like, after 2 weeks, I remember Jake. I remember it being funny. I remember she was over the top, but I didn’t like him enough to stick in my memory.

But all-in-all THAT GUY was a totally fun and outrageous romcom. There are two kinds of romantic comedies – the romance with some light funny moments, or the comedy with a little sweet romance. That Guy absolutely falls in the latter category. It seems like she may have been setting up another story. I will totally listen to that on release.

I hope Kim Jones keeps writing romantic comedies. I’d love to see her write one that isn’t quite as ridiculous as this was, but even if they are all just like this, I’d listen to them all and enjoy the laughter, because That Guy was the rare rom-com that made me literally laugh out loud a bunch of times throughout the book.

This was such a great book. Fun, witty, sarcastic and sexy. An excellent introduction to Kim Jones’ writing. I enjoyed the POV from the aspiring author, but I’m not sure I will be running to read it again. If you’re a part of the book community, whether you’re a reader, blogger or author, this is a definite must read!

Purchase That Guy by Kim Jones 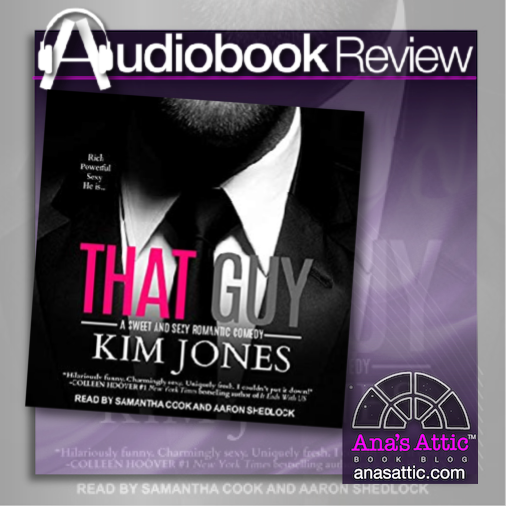