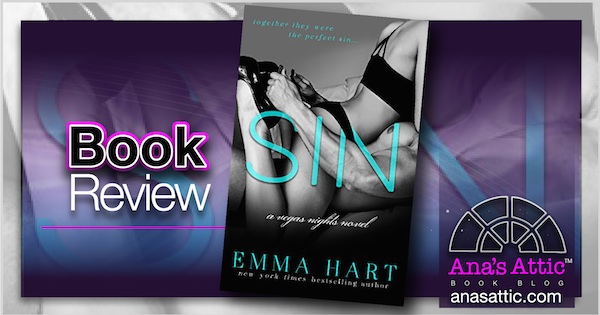 I’ve only read Emma Hart’s recent RomComs, and since I loved them, I was excited for Sin (Vegas Nights, #1). I love banter in books, and an enemies to lovers book is usually filled with banter. Add to that a cocky alphahole and a strong, feisty woman and that, to me, is gold.

“My name is Damien. Remember it. You’ll need it when you beg me”

Dahlia just lost her father, and she is coming back to their bar after 3 months of grieving. This isn’t any old bar, it’s a wildly successful BOOK THEMED BAR, The Scarlet Letter, in Las Vegas. I love how Dahlia was book obsessed and so cute about it! It was hard going back to the place that was so much of her parents, but she was gone far too long, and some jerk was getting real pushy about trying to buy it.

“It was time for me to pull up my big girl panties—but not too far, given that I was wearing a thong—and get the hell on with it.”

Damien Fox’s father’s company owns half the strip clubs in Vegas. Now his dad has an obsession with buying The Scarlet Letter, and Damien, who runs the company, is doing whatever he has to to get his hands on it for him. He is railroading his way into the bar and he will not give up.

“One day,” I said in a low voice, holding her harsh gaze. “One day, you’ll have dinner with me, Dahlia. Just like one day I’ll own this bar. One day, you’ll be on your back, my handprint on your ass, and my cock buried right inside you.”

Whew! He is a hottie! The banter and fighting between them was totally foreplay.

“If a kiss could be used as a weapon in battle, his fighting ability would be unparalleled.”

Dahlia is a damn good businesswoman. Just because she took some time off to grieve, doesn’t mean she is going to roll over, no way. Besides, she hates Damien…doesn’t she? 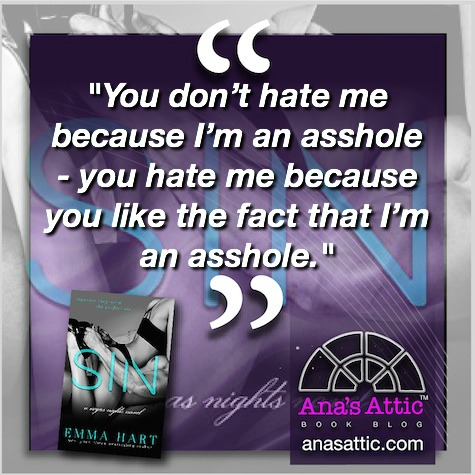 You know how that goes, right?

“Dear God, I’d crossed the line from hating him to wanting him, and then I’d stepped a little further into my own personal hell, wanting him even more than that.”

There were so many funny lines (especially when he read some of her smut!) and there was such great build-up. But then, I don’t know, it kind of lost my interest for a little while. Maybe it was my personal life intruding, but it got a little draggy in the middle. I kept waiting for the big reason the two families hated each other, and why his dad wanted the bar so much to be a climactic scene, and it just fizzled out, and unless I missed it, I don’t think there was ever much of a reason. The story picked up again for me at the end when Perrie, the heroine for the next book, was introduced. The preview for that sucked me in, but I’m going to have a hard time believing that any woman would make the choices she made when another option was available—ANY option.

The first half of Sin was a 5 star read for me. The chemistry and build-up between the couple was great, I love banter in an enemies to lovers story, and I love a cocky alphahole. But somewhere in the middle to end my excitement waned as not much really happened. I was waiting for some big secret and confrontation between the two families and that whole story never really panned out. It picked up again at the end, and I absolutely got sucked into the preview for the next standalone story in the series, Lust, coming in September. I must mention, that I was hacked on Facebook while reading this book, causing some stressful distraction, and that may have played a part in my feelings of ambivalence in the middle, but I still think I liked the build-up the best. One thing I absolutely loved was the book-themed bar, and the future thoughts of a book-themed restaurant that we will hopefully see in Lust. I loved how her love of books was a big part of the story. 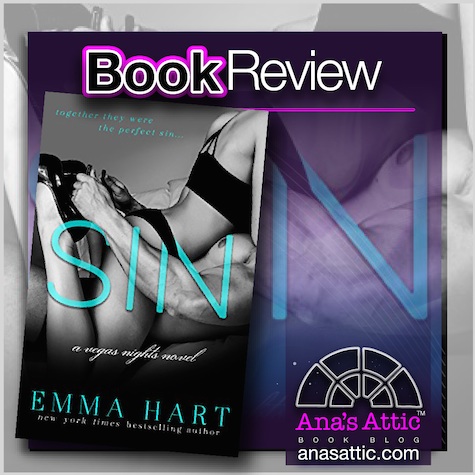