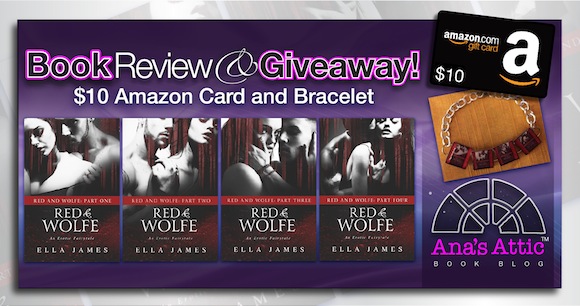 I’m not normally a fan of serials, but this one by Ella James intrigued me. Only 4 parts which are all out, I figured, why not? Little Red Riding Hood was a favorite of mine growing up…perhaps I wanted to meet the big bad wolf! Well here is a very grown up, modern version of the story, and believe me, you won’t want your kids reading it!

Instead of reviewing each book individually (which would have spoilers), I am going to review as it it is one big book, and not reveal events that happen in later books.

Sarah “Red” Ryder is having a crap time of it. Her mom died, she was laid off, her boyfriend left her for another guy, and her life is falling apart. She is selling off all of her possessions to make ends meet. In a moment of drunk desperation, she sends off an e-mail to her estranged, very wealthy grandmother. When she gets a check for $30,000 then the response, “COME”, she figures, ‘what can she lose?’ and heads to the remote, private, tree covered island her grandmother owns, separated from the world by cold, rough seas.

She, however, is not met by her grandmother, but by James “Race” Wolfe. James has been a recluse on the island helping her grandmother, while escaping a scandal in his personal life. When Sarah meets “Race”, sparks fly.

“Then he takes a slow stride toward me, lifts his head a little, and I see his face.
Holy fucking wow.
This man is brutally handsome.”

“You’re Red.” His voice is so low, I can feel the timbre of it between my legs.
“You’re… not my grandmother.”

Race wants the deed to the island, but when he sees Red, he wants more. After just meeting, he lets Red steer the boat to the island, and he gives her the reason.

In a low, scratchy voice that may just be the wind and my imagination, he murmurs, “Truth? I want to put my hands on you.”

They actually don’t hit it off well at all, but the attraction is sizzling.

“She wants me. She may not like me, but she fucking wants me just like I want her.”

“He pushes me into the sand and peels my jeans off , then my torn rainbow underwear. He slides his button-up under my ass and pulls down his boxer-briefs, freeing an enormous, vein-striped, purple-headed fuck machine.”

Though she only knows him as Race, Sarah thinks of him like the big bad wolf (and boy, is that the kind of eating they meant in the original?)

“My nickname for him— Wolf— is totally appropriate. I definitely feel like Little Red Riding Hood right now, clutching my bags as I walk slowly through the woods, to grandmother’s house.”

Despite Sarah’s bad position in her life, she never has a depressed feel, and I really liked the tough, take no shit, light personality. It was just the opposite of Race’s dark, secretive, dominating persona.

“Despite how… drawn to her I feel , maybe I shouldn’t have asked her to stay. I’m uneasy with her here. Uneasy with her… lightness. She’s got some darkness in there somewhere, but it’s not who she is. Most of her is light as air. She’s a good person. Very innocent.”

Wolfe is hot as hell and totally dominating.

“I’m your new God, Red. Now I want you to close your eyes and let your pussy worship me.”

But there is danger surrounding him. So not only do we have ultra-hot, dirty dominating sex, we have action and adventure with some edge of your seat suspense. 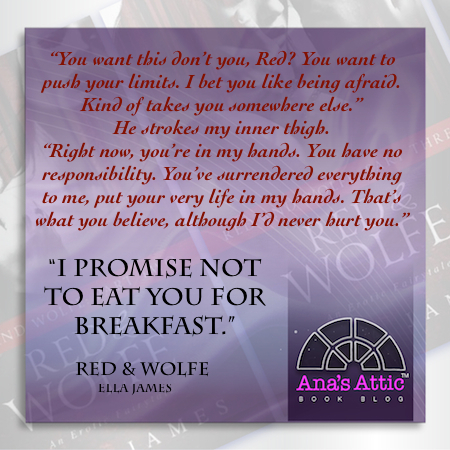 I really enjoyed how Ella took the basic things about Little Red Riding Hood and twisted it into a whole different story, yet you can still find the parallels. I think it was extremely clever, totally hot as hell, and kept me on the edge of my seat (wiggling a little) the whole time. I can’t wait to see what she does with Beast! 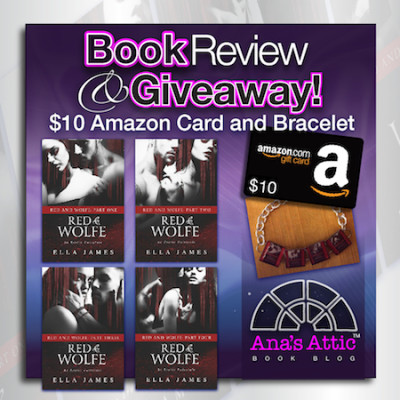