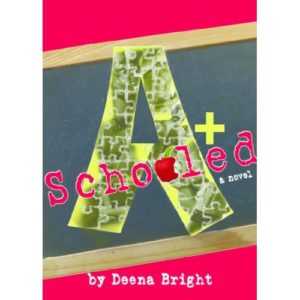 Deena Bright sent me a copy of Schooled over a month ago, and I finally got around to it on my huge TBR list. (I admit, hearing there was some controversy over her writing this and that her job as a teacher was at risk, forced it up a few spots on my TBR) I must say, it was one of the more unique books I’ve read this year. Schooled was funny, sexy, dirty, borderline inappropriate and filled with some great pop culture references. Warning: There is a cliffhanger ending that I didn’t expect, but I will definitely be looking for the next.

Janelle is a 29 year old High School English teacher who comes home a little earlier than expected from the last-day-of-school teachers party. What does she come home to? Her dickwad husband licking his secretary’s asshole and more…..this from a guy who hasn’t slept with her in months, and when he did, it was strictly bland vanilla. She leaves to drown her sorrows in alcohol and runs into a former student.

Briggs is a 23 year old, beautiful blue-eyed, black football star-turned ESPN reality star. He’s always had a crush on “Ms. Garrity”. Now the boy has become a man, and Janelle can’t help but notice that fact, especially as this confident man sweeps her off her feet, lets her know she is beautiful, and that he wants HER. She so badly needs the confidence. They do some dirty dancing, and a lot of flirting, but drunk as she is, she realizes it’s inappropriate. But Briggs is with a new woman every night. Her certainly knows how to tease and make a woman lust after him.

“Janelle. I’m gonna fuck you so right, you’ll forget everything you saw tonight and never remember that bastard’s name again.” He took the last drink of his soda, and got out his credit card. “It might not be tonight, maybe not even tomorrow. But it’s gonna happen, probably a lot more than once.”

Janelle has moved to her wealthy brother’s pool house, and is helping to get him set up with a lawn guy. She remembered a former student (also now 23) who did lawns and calls him up. When Leo Cling shows up to help out, he is not the nerdy kid she remembers, he is now built, gorgeous, smart, but still shy. But as he helps out, he plays with her nieces, he hangs with Janelle, and they all get along and have a great time. Leo is book-smart when it comes to sex. He has read up on every way to please a woman, but has never found anyone worthy of using that knowledge on. Janelle can’t help but feel pulled to him as well.

“The sexy V was begging for touch, calling to be licked and worshipped”

But Briggs doesn’t let up, and keeps pursuing his high school fantasy. When they finally go for it, Briggs does NOT live up to his promises. But Janelle, aka “Ms. Garrity” calls him on it, and uses it as a teachable moment. She decides to take it upon herself to teach Briggs how to please a woman. After giving him a full-on demonstration:

“You’re making me go home like this?” He pointed to his jeans, his straining cock.

“I think you were going to leave me in the same condition earlier and I would’ve had to take measures into my own hands. I suggest you do the same”

“I used to think you were the best teacher ever, now I know it for sure. Damn. Next time.”

Every time Leo comes over, he and Janelle have a great time. He is smart, well-read, and even reads chick lit to better get inside a woman’s head. He thinks women are looking for the Edward and Christians in this world, but Janelle straightens him out:

“If he and Bella were a real adolescent couple, she’d freak her shit if her started telling her where to go, who to talk to, and snuck in at night to watch her sleep. She’d have a restraining order on him in 10 seconds flat”

Christian Grey in this light:
“The same with Christian and Anastasia; she’d deem him a crazy-ass freak job, and she’d spend hours making fun of him with her roommate and hot artist friend.”

Janelle is also sent to New York with her brother’s assistant, another former student, this time a lesbian. And guess what? There is a little experimentation there as well.

Janelle continues to see both Briggs and Leo, sleeping with both, and though she feels guilty the whole time, a) about the fact that they were students and b) that she is seeing both and totally can’t decide, she is crazy about both of them, and c) she isn’t even divorced yet.

This was a story about a woman who was finally sowing her oats. She never did in college, so at 29, she is finally living it up. But is it inappropriate to sleep with former students who are now adults? At first she tries to make it just about the sex, but as it usually does, deep emotions get involved, and a decision must be made.

All three of these former students also turned into her teachers. They taught her a lot about herself, about life, and how to live it.

Schooled was a fun, unique read. I liked the characters, despite the feeling that it was borderline inappropriate. I loved how the characters totally seemed like people I want to hang with, especially in the acknowledgements, when I realized the author is way closer to my age (40s) than the character’s ages (this actually bumped my rating up from a 3.75). Though the book started a little rough in the writing flow, the groove was picked as the book went on. I look forward to reading the next in the series, and sincerely hope that the author is not punished in real life due to the writing of this book.

It’s no secret that I LOVE @laurenblakelybooks .