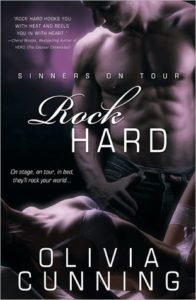 Rock Hard by Olivia Cunning is the second in the Sinners on Tour series. The first was Backstage Pass (read in order, that review is here!!!). I LOVE LOVE LOVE the Sinners!!! They are all a bunch of yummy rock stars with heart.

I have to say, I didn’t love this book as much as the first. Backstage Pass was such a SOLID 5 star book, and this one was more like a 4.75. The reason? Jessica, the heroine (or bitch in this case). Sed is the lead singer of the Sinners. Sed is portrayed as kind of an asshole in the first book, especially stealing Brian’s girls. We come to find out it is because his ex-fiance, Jessica, really hurt him 2 years before and he can’t get over it. Well this book is about Sed and Jessica finding their way back to each other.

Sed is a dominant guy who likes to take control. Jessica is an independent woman who does not like to give up control. So there was a LOT of head-butting in this book. Sed was obviously in love and wanted her back. Jessica wanted to fuck and not get her heart involved. And fuck they did! EVERYWHERE!!!! And it was HOT! They were into public sex and there was no lack of passion between them. The passion erupted into fighting as much as sex, so their relationship had lots of hurdles.

I didn’t HATE Jessica, but found myself not liking her many times.  Sed wanted to keep her happy and safe and she needed to do it herself. They both needed to compromise. And they did, eventually. I began to like her better as the book progressed.

What I really loved about this book was the other characters! We get to re-visit Brian and Myrna in this, which I loved. Too often series that focus on different characters in a group forget about the ones from previous books except in passing. This one allowed us much more of them. Also, Trey. Poor baby, he can’t win. According to Olivia Cunning, his book is next and I can’t wait!!!!!

“I love the Sinners. But I found it difficult to like Jessica that much, hence the reason it isn’t 5 stars. Also, I didn’t like it nearly as much as the first book, Backstage Pass. But still, I did love it, and both of the books will be in the small pile of my ” worth reading again” books. The sex was very hot again (though not quite as hot as Brian and Myrna). This time though, we got more into the band as a whole, which I really liked. I also enjoyed seeing how songs are written by the band.

I was just asked to recommend some books to someone who just got an e-reader. This series was the first of 3 on my list, so obviously, I am really enjoying it. I wish I can add a half star, but there was just a little bit of a bad taste as I read it because Jessica didn’t seem to care about the band the way I did. With Myrna, she was a fan, Jessica just didn’t seem to care about the music, or the other band member’s feelings enough.”

All in all though, this is still a top favorite. Olivia Cunning is a auto-buy author for me, and I can’t wait for Trey’s book, Double Time (oooooh, double????? YUM!!!) in the fall.

Make sure you have some toys on hand for this series!