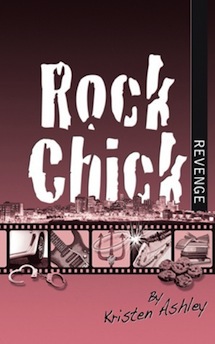 “Swear to God, these boys should be locked up. It isn’t safe, men with that much testosterone coursing through their blood free to roam.”

I was having a really bad week. One of the worst ever. So I knew I needed Kristen Ashley. 10 pages in, I was already breathless and giddy with excitement. I loved every second of  Rock Chick Revenge from the first page to the last which took 3 days to get to! Kristen Ashley is the queen of the long, juicy feel-good book. And that feeling lasts and lasts. Rock Chick Revenge can be read alone, but it would be WAY better if you got to know the huge group of characters from previous Rock Chick Books. See the Rock Chick by Kristen Ashley Series Order.

“He isn’t my man.”
“Girl, it dont matter you don’t think he is, he thinks he is. Therefore in Badass Motherfucker Land, that means he is.”

I love all the Badass Motherfuckers in the Rock Chick series by Kristen Ashley, but I have to tell you, Luke fucking Stark (and his handcuffs) is my favorite. And I totally loved Ava, the newest member of the Rock Chicks. Ava grew up across the street from Luke, crushing on him since she was 8 years old. But Ava was “Fatty Fatty Four Eyes”, and had 2 older bitchy beauty-queen sisters, and a just-as bitchy mom who put her down all the time.

As kids, Ava and Luke had a special bond, and she promised him she would meet him after his father’s funeral. Until she overheard her sisters.

“God, it was sick, seeing her pressed up to him like that. All her fat, like, bulging,” Marilyn said.

It was then that she vowed never to let Luke see her again until she lost the weight and got contacts. Then Luke disappeared into hot-guy training land for years. But during that time, Ava realized men just weren’t worth it. After a string of asshole boyfriends, and her best friend’s husband cheating on her, the now-gorgeous Ava vowed everlasting fidelity to her vibrators, and no men ever again.

But she wanted to help her friend Sissy catch the cheating asshole, so she stopped by her old friend Luke’s office. Until she gets a load of the crazies there (LOVE this!) and tries to back out. You know the hot bunch by now…they don’t let anyone back down.

“I’ll put money down that she’s livin’ with him in 4 days.”…
“3 days,” glamour girl said…
“A week, she’s got spirit,” the other black lady said…
I shook my head, I needed to focus, leave these nutsos behind and go, go, go.
I opened the outer door.
Before it closed behind me, I heard Luke say strangely, “Tonight.”
Then everyone laughed.”

But when Ava finds herself right in the middle of trouble, guess who saves her??? Mmmmm yes. Luke Stark. He tries to get the whole story out of her, but Ava refuses to share. So what does Luke do? Breaks out the handcuffs and cuffs her to him, and the “badass motherfucker courtship” begins….

“Ava, you missed it when it happened so I’ll clue you in. last night, around the time you fell asleep against me, you became mine.”

Ava was at war with herself, actually, good Ava and bad Ava were sitting on her shoulders, fighting each other.

“We’re going to bed. WE are going to bed, he said. Yippee! Bad Ava yelled happily in my ear, punching the air and doing a touchdown dance.

He’s so thoughtful, going out to get your contact stuff. I think he’s adorable, Good Ava shared.”

But interruptions abound! They keep getting calls and visitors…

“…I’ve been struggling with the urge to walk away from my mother, drag you back to my bed, rip your fuckin’ clothes off and bury myself so deep inside you, you feel me in your throat.”

Ava has lost a lot of the Ava that Luke knew when she was younger. Her evil sisters, her mother, her father who left and all the loser boyfriends she has had took pieces of her until the sweet Ava was almost gone. But Luke was determined to get her back.

“I’m not lettin’ you go. I’m not lettin’ you push me away and I’m not giving up. I’m gonna keep working until I piece together what your dad and those assholes tore from you. I’m gonna keep at you until you let me in. I’m not gonna stop until you tell me you’re mine, until it comes straight from your mouth, preferably when I’m deep inside you and you’re lookin’ at me like you look at me when I’m close to makin’ you come.”

As with all the Rock Chick books, we have our share of funny scenes (there are a LOT), sexy scenes, especially the tease of sexy scenes, kidnappings and car chases (best car chase EVAH!), romance, totally hot protective alphas, and a few scenes that made tears well up.

I have to tell you, this is my idea of a PERFECT book.

Kristen Ashley kind of has her own scale because her books stand out as so amazing. But even on her own scale Rock Chick Revenge stood out on top. I loved every single giddy, excited second I spent reading it. I love that I am reading this series slowly so that every time I’m reading one it feels like visiting old best friends. I could kick myself for putting this series off for some reason, thinking it wasn’t hot enough compared to her others. It is plenty hot…the promise of sex is just as hot as the actual sex!

She told me the best way to protect my heart was to trust it to someone who will protect it for me”.
More silence but his body went completely still.
“That’s you. It’s always been you.”

Seriously. Read the Rock Chick series, but I highly recommend starting at the beginning.

Sidenote: meeting Kristen Ashley at Wicked Book GNO was incredible. My husband said he knew there was something special about her immediately. It comes across right away. What a wonderful woman! 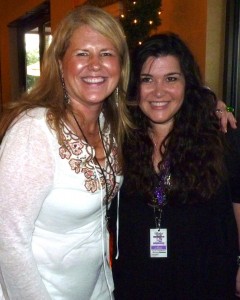 Kristen Ashley and me!!! Swoon!

So many of you said you have not read Kristen Ashley at all or the Rock Chick Series. This giveaway is for ANY Kristen Ashley e-book, though I highly recommend a first-timer start with Rock Chick. EVERYONE needs to read her!!!