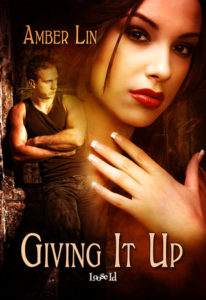 Giving It Up by Amber Lin was sent to me by the author as an ARC in exchange for a fair review. Being fairly new to blogging, I didn’t want to read any reviews before accepting it. I should have because I probably would not have chosen it on my own. Though many of my trusted reading buddies loved it, it was not for me. It is a very dark, gritty tale with a woman who continues to punish herself for be raped. This was not a pretty book, but it was real. Too real and gritty for me. 2.5 stars for story 2 Hs for Heat.

Allie was raped by one of her best childhood friend Jacob, and worse. When she found out she was pregnant, she and her best girlfriend, Shelly took off. Shelly became a hooker to help Allie and her baby out, and Allie got a crappy job at a bakery. Allie is so damaged that she has a need to go out, once a month, pick up a strange, rough looking guy and have random, rough sex with them. To be treated like she was during the rape, but on her terms. One night, she picks up Colin. He treats her differently–maybe not the way she wants, but the way she needs. Colin owns a restaurant but does some criminal work for his mob-like brother. At first, Allie wants to stay away for her daughter’s sake, but when her rapist returns, she turns to Colin, and moves in with him and allows him to basically be a sugar daddy for her & her and her daughter.

With Colin, Allie is coming out of the “beat me, I need it” attitude, but has so many dark recesses in her mind, those feelings haunt her. She feels she needs to please him because of all he does for her. But yet we never really hear Colin in this book. He is a looming presence, but we never really hear his voice, just Allie’s fucked up thoughts of what he is thinking. I have never read about such a taciturn guy. When we read Colin may be responsible (or is) responsible for some messed up stuff, it doesn’t seem congruent with the personality we have read about.

Overall, I can’t go above 2.5 stars for this. There were just too many things that I didn’t like. Here are my largest likes and dislikes:
Liked:
-Bailey. Allie’s daughter. She was adorable, and I would have actually liked more of her.
-Allie tried to be a good mom
-Colin taking a single mom and a baby in and being great with them
-The older neighbor
-That Allie grew and developed a backbone

Thank God there was a happy ending and some growth or I would be really pissed I wasted 2 days in a dark mood. If you like darker books, with people working out their issues, this may be the book for you. If you regularly follow me, you know that I prefer books to make me happy and excited, this didn’t do that, but it was still a well written book.

Purchase Giving It Up (Fully updated with new cover) at Amazon