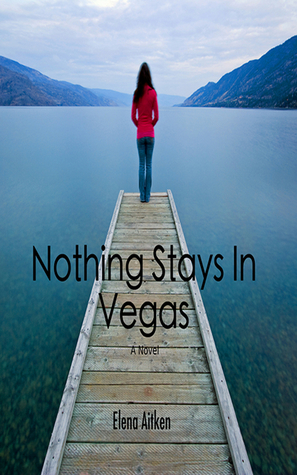 Nothing Stays in Vegas by Elena Aitken was a chick-lit romance. It was a very enjoyable read, but nothing made me jump out of my seat to say WOW! I read it in half a day, I didn’t want to put it down; especially the second half, and it brought me to happy tears towards the end.

Lexi is dragged by her best friend Nicole for a weekend in Vegas. Lexie has been separated from her husband for months, and goes without intending to hook up with somebody else. Then she meets Leo, and sparks fly. The connection they have is palpable, and it is believable that they fall for each other in one night. Due to various misunderstandings, they go back to their lives after the weekend, and when Lexi takes her husband back, she finds she is pregnant. Though her husband is back home, he takes no interest in their child, and often works late, leaving Lexi to raise Ben on her own. Over the next 6 years, both Lexi and Leo couldn’t stop thinking of each other, and the love that got away.

Then Nicole decides to get married in Vegas, and wants her best friend there. All around Lexi are memories of Leo, and when they connect again, the sparks fly even more.

I usually don’t enjoy books with cheating, but really, there wasn’t cheating. When Lexi and Leo hook up at first, she was separated with no intention of returning to the marriage. And the second time, it was clear the marriage was over already. Leo was such a yummy guy, I couldn’t blame Lexi for connecting with him, and Andrew seemed like a bit of an ass.

A few things stopped this from being a 5 star read to me. First of all, this changed first person POVs from Lexi to Leo throughout the book. I liked that, but there was no rhyme or reason, no pattern to the changes, so you read a few paragraphs before you realize who is speaking. There were a number of grammatical errors (one especially drove me nuts–“he smelt good” was used a couple of times-smelled is the correct term, smelt is a fish or heating metal). But still it was overall a nice, easy enjoyable light read.

This was definitely a nice, sweet beach read, The boy, Ben was adorable, I had difficulty putting it down, and I got emotionally involved. I recommend it, though it won’t be on my favorites lists, due to the errors and the fact that it wasn’t really very unique or memorable.

Purchase Nothing Stays in Vegas

A Dozen Top Romances For Summer