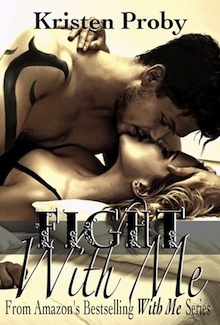 Look out folks, we have another Apa! Yes, those pierced penises get me every time. It’s kind of on my bucket list, but since I don’t want my husband messing around down there  (nor would he), that’s something from my list that will go unfulfilled. Besides, they sound hot as fuck in books, but in real life? I dunno, I’d be nervous it would hurt me, rip the condom, or get lost in me (yes, things have been lost in there before). But I really, really like to read about them.

“So, my conservative-looking, suit-wearing boss has a tattoo and has his penis pierced?” I ask with a smile.
Nate laughs and takes another pull on his beer. “Yes. You didn’t seem to mind the piercing, if memory serves correctly.”

Fight With Me is the 2nd full length novel in the With Me in Seattle Series. They can all be read alone, and I recommend you don’t read them all at one time. Too much of a good thing doesn’t always turn out well.  The first in the series was Come Away with Me (my review), followed by Under the Mistletoe with Me novella (my review). I have really enjoyed the sweet, sexy, romantic, angst-free ride that this series has brought. And I have often heard that they get better as you go along, I agree.

“What are you going to do with me?” I ask against his lips.

We met Jules and Nate in Come Away with Me. Jules was Nat’s smart and sassy roommate. She slept with her boss, and dated him once, but the company’s strict no fraternization policy has held them back from repeating the incident. Nate is an executive but he also has long hair, a gorgeous body, tattoos, and he is pierced for  her pleasure. Oh, did I mention he’s an ex UFC fighter? Can you say yum? I know I can… Not only is he completely sexy, he’s possessive and protective.

“Don’t worry,” he whispers. “I wasn’t kidding when I said you’re mine. I will protect you with everything I have, baby.”
“Ditto,” I whisper.

“…knowing other men have seen you, fantasized about you, makes me want to put each and every one of them into the hospital, starting with our young waiter.

Nate is also the sweetest guy ever, and Jules, a former playboy model with 3 older brothers, is just so normal and likable. And she is tough, smart, independent, sassy, and no inexperienced virgin.

“Julianne, your beautiful face is only outmatched by what’s inside you.”
What the fuck? No one, no man anyway, has ever said anything about what’s inside me, Unless he was referring to his dick.

Now, let’s talk about the sex. Holy hell, there was lots of it. And all the good stuff too! Panty-ripping, even pants-ripping, motorcycle sex, bossy dominant guy…everything you want you got.

He reaches between us and rips my yoga pants at the seam of my crotch. Holy fucking shit! My panties are next, and before I know it, he’s lowered the waist of my pants and is filling me.

But therein lies my problem with this series. It’s all too perfect. It is everything you could ever want. First we had the famous actor, now we have the professional with the dirty bad-boy hiding underneath, next is a professional football player, then a rock star. Is a military guy coming too? The heroines are absolutely beautiful, and  the heroes are a perfect mix of hot, protective, alpha, romantic, and completely devoted. The sex is varied and frequent and everyone is bound to find the kind they love.

“…you just blindsided me. I am so fucking wrapped up in you I can’t see straight.”

“I’m a badass, but there are times that I need someone to hold me up too, and I didn’t know until I found you that that doesn’t make me weak, it means that I’ve found my partner.”

I thought this was a better all-around book than Come Away With Me. But for me, reading three of this series in a row was just too much. It’s like cookie dough. Yum when you eat a little, but when you eat too much you start feeling sick. That’s how I started feeling midway through this. It was just too much sweet and perfect overload. I think if I had read Fight With Me on it’s own, in between some grittier books, I would have appreciated it more and given it an even higher rating, but you need to save these for when you really need something light, sexy, sweet and happy. When you are in need of a book like that though, Fight With Me is perfect.

“It’s only you, Julianne. It will only ever be you.”

Purchase Fight With Me (With Me in Seattle 2)

See the With Me In Seattle Series here