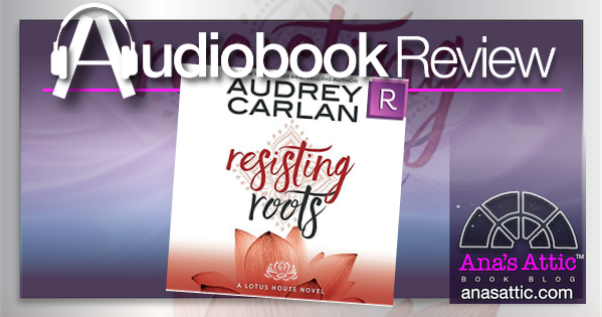 I grabbed Resisting Roots by Audrey Carlan on Audible when I found out it was going to be a Passionflix movie. I never even read the blurb. It began with the author telling us she was a yoga teacher in real life so her knowledge of yoga was extensive. And it was about a yoga teacher, something I haven’t read before, so I was excited to listen.

Each chapter began with an explanation of chakras which in audio, just kind of made me zone out. Perhaps those parts would have been better in print because they are easy to jump over, but It felt like I was listening to a yoga textbook at times. But I was intrigued by a yoga story.

Trent Fox is a famous baseball player who tore his hamstring and is sent to yoga to rehabilitate. The yoga studio is located in a small area of Berkeley that is all new age shops and all the stores work together. When Trent visits the local stores, he flirts with all the pretty women. Then he gets to his yoga teacher, Genevieve, and then he fixated on her.

Genevieve (“Viv”) lost her parents and is raising her siblings in her parent’s house and trying to keep it together. Her teen brother is a baseball player and Trent is his hero, so Trent is invited into her life for him, but she doesn’t have time for romance. She teaches yoga, cuts hair, and has kids to take care of.

At first he was kind of a dick about the fact that she couldn’t make time for him, but when he realized the extent of her situation he got better and helped as much as he could. I started thinking he had potential when he gave her a nickname. I LOVE cute nicknames.

“I think I’d like that very much, gumdrop.”
“Gumdrop?”
“Your lips are pretty and pink and look as sweet as candy. Reminds me of a pink sugarcoated cherry gumdrop. My favorite.”

But I am going to be honest here, I never warmed up to Trent and honestly, I thought he was kind of a dick. He flirted with girls in front of her, and it just seemed like he only cared about getting his dick wet, he even said something similar at one point. The way he talked about women in general just skeeved me out, for instance, he often talked about her “big titties” and “juicy pussy”, or “juicy spot between her legs”, and he was an overly jealous ass.

But there were some really sweet times where he began to redeem himself, and let me tell you, yoga sex is HOT. There was A LOT of sex in this book, and there was a LOT of yoga. (There was also a lot of forms of the word “tit”). I bet the next book featuring the tantric yoga instructor will be totally hot. But there was definitely a sweet romance as well.

“Wherever you are is where I want to lay down my roots.”

The narrators were both fantastic, but I felt that the yoga stuff at the beginning really didn’t lend itself well to narration. I felt myself zoning out during that then having trouble getting back into it.

I wanted so much to love Resisting Roots, especially because it is going to be a Passionflix movie. Don’t get me wrong, I liked the story, I loved how unique it was, but I really didn’t like the hero. He seemed like all he wanted was “juicy pussy” and “big titties” and he kind of skeeved me out at times. Other times he was awesome and supportive, but I never got over the initial ‘eew’ from him. I loved the concept of all the yoga, but in audio form, it was way too much for me. Resisting Roots was a super sexy read, with one of the most memorable and unique sex scenes I have ever read, so let me tell you, it may be worth reading just for that, and I bet the next book, Sacred Serenity is even hotter, because I think it’s about the tantric yoga instructor. 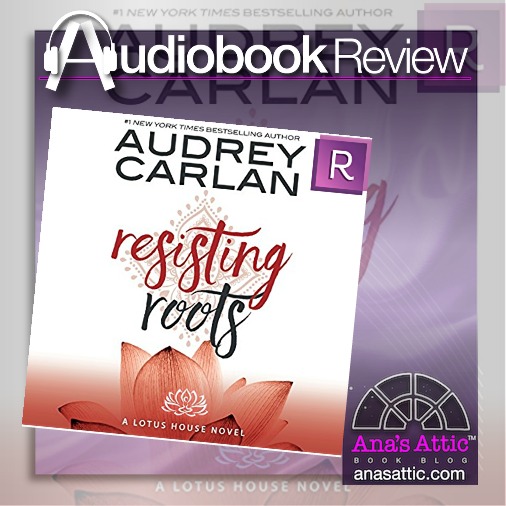