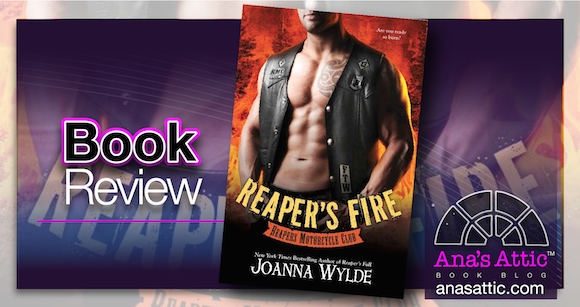 The Reaper’s Series is one of the very few series that I have continued reading. This is really the 8th book if you count novellas and the Silver Bastards spin-off, which is more than I ever stick with since I started blogging. As I have discussed before, my memory is awful, so I had a real problem with the last book, (Mel & Painter’s) because I felt like it relied way too much on previous books. I know that Gage and Tinker, the characters in Reaper’s Fire were introduced in that book, but honestly I don’t remember them. Lucky for me, Reaper’s Fire can totally stand alone (though I don’t recommend it, it’s much better if you read the series from the beginning).

Gage is a Reaper who got tired of running the strip clubs for the MC and was looking for something different. So he was sent undercover to investigate another MC that the Reaper’s heard were having some problems. Gage came in as ‘Cooper’ and got a job and apartment as a handyman for an apartment building Tinker owned.

Tinker was 36, a gourmet chocolate maker, in the middle of a divorce from a total asshole, back in her hometown to take care of her ailing father. I loved Tinker and her best friend, they made the book for me, and I would totally want to hang with them.

“Holy. Shit.
I’d taken note of his build when he first walked into the shop, but everything under his shirt had been theoretical. Now there was six-foot-plus of raw sex appeal right there, all sweaty and sculpted and…well, let’s just say I’d be stopping off on the way home to pick up some fresh batteries.”

“I’d managed a goddamned strip club for two years, but this bitch put all those girls to shame and she hadn’t even taken off her clothes yet. An image of her naked and sprawled across one of those prissy little tables filled my mind. I had to hold back a shudder.
Walk out–this isn’t going to end well.“

There was one big problem. Part of Gage’s cover, and his “in” for the club, was fucking the president’s sister and town crazy bitch. So while Tinker and her friend perved on him from the window, she knew she would never have a guy who was into skinny, young biker bitches. As for Gage, he knew he had a job, and the club comes first.

“Any other time, any other place, she’d be under me already, but I knew my job. Reapers Forever, Forever Reapers. Sometimes loyalty sucked.”

Talia, the ‘girlfriend’, was a skanky bitch, I was hoping he’d get rid of her pretty early on, but he was with her for more than half the book. While this made for a nice slow build-up of the sexual tension between Tinker and Gage, it did go on a bit too long.

The book took place during some major wildfires, and right from the beginning, Joanna really had me feeling the smokey air, seeing the orange hazy sun and the ashes flitting down. It kind of set a foreboding tone to the whole story that I liked. In fact I really liked the fire part of the story. At like 90%, I started wondering if there was a cliffy, because there was so much that was still going on! The end was very exciting, but left a LOT of unfinished business and unanswered questions.

While reading Reaper’s Fire, I was totally loving it, thinking it may be a favorite, but as I write this review, I realize how many loose ends there are. But my biggest problem with the book was not enough together time at all. I would have really liked to see the couple TOGETHER, physically and emotionally. 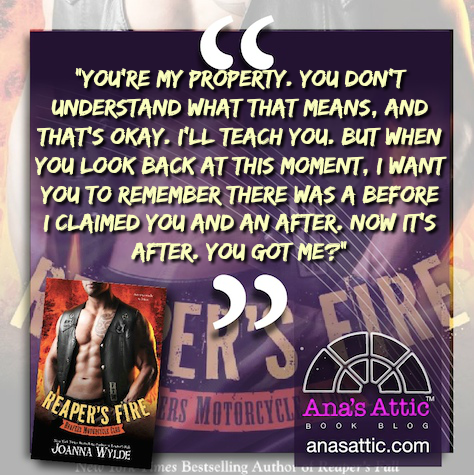 I found Reaper’s Fire to be unputdownable. I really enjoyed it while reading it, though I got frustrated that the main couple weren’t together until way after the halfway point–then they still weren’t physically together. I liked that I didn’t have to remember a lot from the previous books, yet still got glimpses of favorite characters. The fire part of the story was told so well I felt like I was there and could feel the smokey air.

I didn’t really realize until I had finished the book how many unresolved issues and unanswered questions there were especially regarding both exes. If they are answered in the next book I feel like I would have to retain too many details from this to appreciate it. Since there was an amazing epilogue, I felt like many of the unanswered issues could have easily been resolved in an epilogue, but they weren’t.

If you are a fan of The Reaper’s, I think that you’ll love Reaper’s Fire but you should know going in that it doesn’t take place at the Reaper’s clubhouse, so you won’t have the same “coming home” feeling you might otherwise. 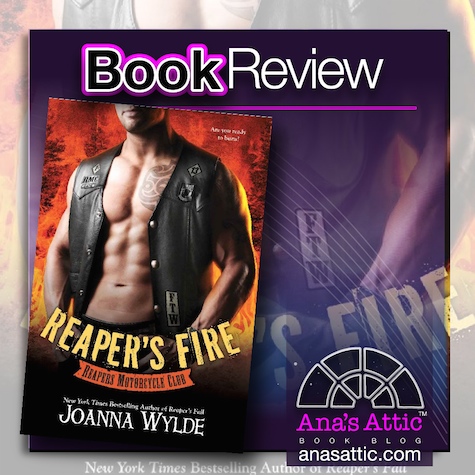