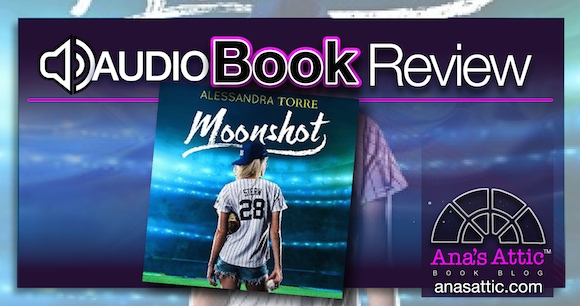 I had been hearing so much about Alessandra Torre’s Moonshot that when I saw it on audible I was thrilled. I couldn’t fit it in my reading schedule, but I needed a new audiobook. I’m not normally a sports romance fan but I was really into baseball when I was a young kid, so at least I understand the game, not that you really need to, but I think it helped me envision the book better.

I had no idea what I was getting into! Moonshot is an epic love story filled with forbidden romance, second chance romance, and suspense. It was like three books in one. And oh, the angst!

The audiobook started a teeny bit rough for me because the female narrator was doing a really bad men’s New York accent (a New York Newspaper reporter), but once she switched to Ty’s voice I got used to her. The heroine, Ty, was seventeen at the beginning of the story, another thing I usually shy away from, because my son is 18, I don’t like reading about kids having sex. But Alessandra portrayed all of the feelings a young girl gets when she falls for an older guy that seems out of her league so well, that I was able to enjoy it and it actually brought me back to my youth a bit.

Ty grew up with the Yankees. After losing her mom, she was forced to go on the road with her father, now a Yankees closer (pitcher). She was home schooled and lived and breathed baseball. And the pinnacle of baseball is the Yankees. Her team.

“This team was my family, my soul. And I think that was what made everything that happened so damn complicated.”

Twenty-two year old Chase Stern is the bad boy of baseball. He is also THE player everyone was watching. He was the star of the sport, and when you have your pick of any team, any player in their right mind would pick the iconic NY Yankees, and Chase did. But the Yankees have a very strict behavior clause, so he needs to stay out of trouble–no sleeping with teammates wives…or daughters.

Ty loves the game so much that she is crazy about Chase, both for his playing, and well, she is 17, and he is gorgeous. She has crushed on him for years, but it’s not about that for her. Ty wants him to stay on the team and win, so she wouldn’t jeopardize that. When she meets him for the first time and he is naked, well not thinking of him “that way” just got a lot harder (teehee, harder–see what I did there?).

“Men had been killed over kisses like that. Careers had been lost. Hearts had been stolen.”

Ty’s relationship with her dad was awesome, and one of my favorite things about the story. Until now, she has never disobeyed him. But as the weeks went on, her and Chase got closer, and there was no going back. They fell deeply in love–until shit went down.

They don’t communicate for 4 years. She is with someone else. But this couple was destined for love. 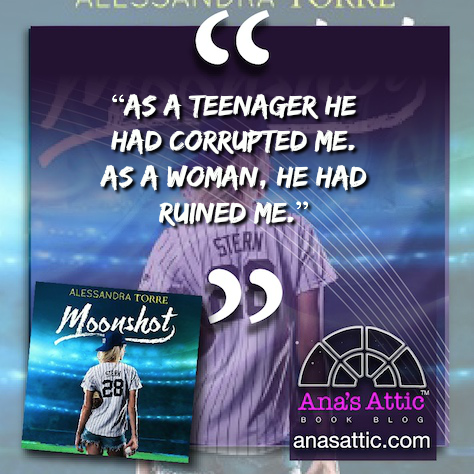 There was also a whole other story going on. Girls were being killed. Girls with a strong connection to the Yankees. I usually love suspense thrown in with my romance novels, but in Moonshot, it felt unnecessary and distracting. Possibly because I hated the narrater’s voice when she read the ‘articles’ about the murders, but mostly because I felt it was too detached from the rest of the story. It just felt like it should have played a bigger part in the story, or not at all.

Alessandra Torre can certainly set a mood and tell a story with skill. Moonshot combined so much into one book– forbidden romance, second chance romance, first love, angst, sex, conflict, drama, suspense, and at the heart of it all, a serious love for baseball. Moonshot took us on an epic journey that was totally unpredictable, had me saying “holy crap!” a number of times, had me in tears, and had me on the edge of my seat. 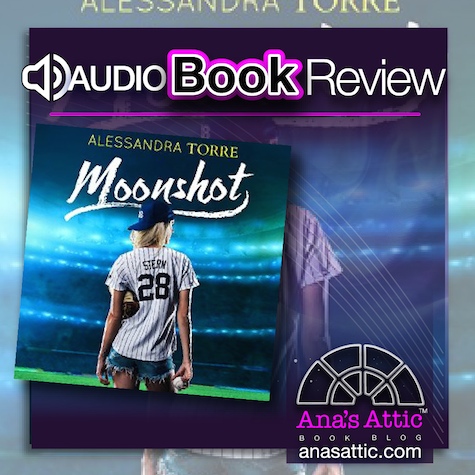