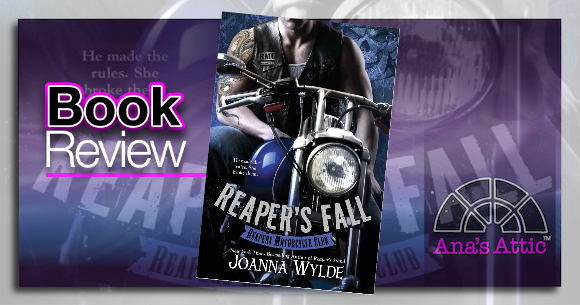 The Reaper’s MC Series by Joanna Wylde has been a favorite series from the beginning, so I couldn’t wait to start reading Reaper’s Fall. But then it took me nearly 2 weeks to read. TWO WEEKS! Books never take me that long. I can’t quite put my finger on what it is, but I found myself doing anything but reading.

Part of my problem is lack of memory. A lot of events where we get to know Painter happened in previous books, and quite honestly, while they struck a familiar chord, I felt like I needed to remember a lot more of the previous stories than I did. I felt a bit lost at times, and if I’m not mistaken, some of the events happened in Silver Bastard, the spin-off of the Reapers series.

Melanie met Painter when he drove her home from the hospital after an accident that blew up her friend’s apartment. Since Painter had no real connections outside the club, and the Reapers were his first priority, he was often the guy chosen to do more risky work for the club. So quickly after he met innocent Melanie he had to leave town, and lent her his car while he was gone. Then Levi “Painter” Brooks was arrested for crimes committed on behalf of the Reapers.

Melanie couldn’t stop thinking of him. And he was kind enough to leave his car for the near stranger, so Melanie began writing him in prison. Those letters got Painter through some rough times, yet he knew that he was no good for her.

What the hell had I been thinking, writing to this girl? She was so pretty and perfect and had this amazing, magical life just waiting for her and all I could think about was dragging her down into the dirt and shoving my cock into every hole she had.
She’d scream while I did it, too, the same sweet screams that played in my head every night while I jacked off.
I hated myself.”

Painter pretty much had a Madonna whore complex, and wanted to keep Melanie pure. So he worked hard to push her away when he was released. But temptation was just too much for him.

You realize what I could do to you out here? Christ Mel. There’s nobody to hear you scream. I can strip you down and fuck your brains out whether you want me to or not.”
“I couldn’t breathe for a minute–he could strip me down and fuck my brains out. Something clenched, deep inside. (My vagina. It was my vagina doing the clenching.)”

I loved the funny little inner thought like that Mel had, but I never fully connected to her. And Painter just never seemed to put her first.

I still wanted better for her. Someone nice, who’d work a steady job, maybe take her to Hawaii every other year. Wash her car or Saturday mornings. Unfortunately, every time I tried to picture that guy, he was dead at my feet.”

Holy angst! This took place over about 5 years. There were flashbacks involved. The couple was apart more than together and grudges are held, big time. Way too long for my tastes.

Are you ever going to forgive me?” he asked softly, catching my chin, forcing me to look at him. “Sometimes it feels like you hate me out of habit.”

As much as I enjoy Joanna’s writing, I had a bit of a hard time with the back and forth games in Reaper’s Fall. 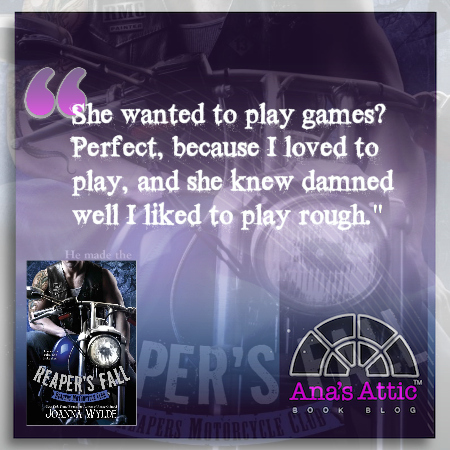 The Reaper’s MC books are some of my favorites. However, Reaper’s Fall was my least favorite of the series so far. Yes, I still liked it, but I found that the couple was apart way too long, and though I liked Melanie most of the book, I never really loved Painter. There was a TON of angst in this one, and it’s grittier than others in the series, but more than anything, I found it frustrating. This book took me about 12 days to read. Yeah, I was really busy, but no matter how busy I am, 12 days is a super long time for me. There was obviously something that just didn’t grab me and hold on in this one. I will be continuing with the series though, because I have loved it all along.