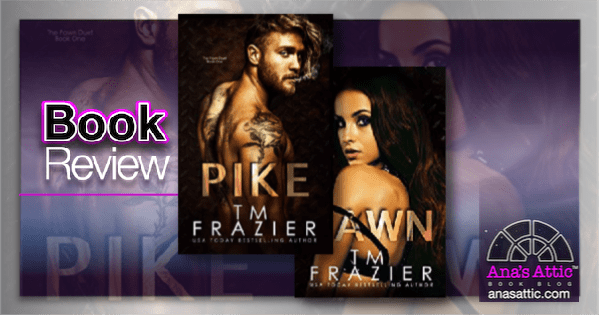 Pike and Pawn (The Pawn Duet) by T.M. Frazier

Can stand alone as a duet, but MUCH better if you read the whole King Series first. 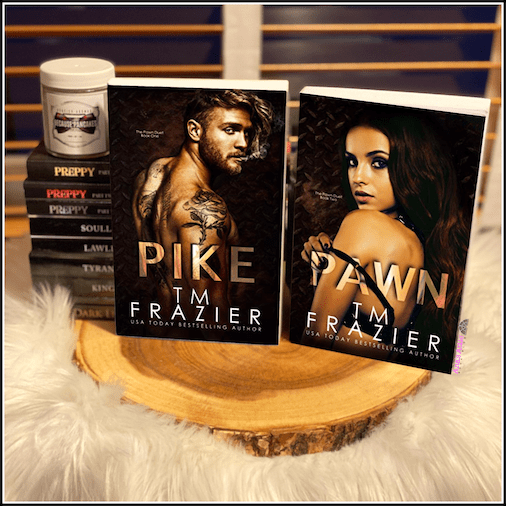 “Logan’s Beach. It’s a town made up of equal parts sand and sadists. Beach and blood. Saltwater and sins. Canals and chaos.”

Oh how I love when T.M. Frazier brings us back to the Logan’s Beach crew! I read Pike the day it came out in March. At the time I was having trouble focusing on reading with all that was going on in the world, but Pike was able to completely capture my attention and kept me glued to my Kindle. The cliffhanger ending was a killer and I couldn’t wait for the next. When Pawn was delayed, I decided to go ahead and re-read Pike again before diving into Pawn and I am so glad I did, because I’m not sure I would have enjoyed book two as much if the first wasn’t fresh in my mind.

“It’s not lies that get you killed. It’s the truth.”

Pike and Mickey met in a strange way four years ago. Now, four years later, they meet under very different circumstances, and Mickey is Pike’s captive.

“When it comes to this girl, my instincts are at war. One tells me to punish. The other to protect. Only one can win.”

All the grit and craziness we have grown to love from T.M. Frazier are here in this duet, as well as almost everyone in previous books from the King Series, including all of our favorite character.

“Preppy isn’t just off his rocker, he’s not even on the fucking porch.”

His booklet: “A Kidnappers Commandments: A Complete Guide to caring for your Captive” had me laughing my ass off. It was just so….Preppy. Yet it was useful for Pike as he tortured Mickey to get information on who is trying to destroy him.

“While I’m distracted, trying to keep everything I’ve worked for from exploding, she somehow manages to slip her small feminine fingers past all of my barriers, reaches into my black fucking soul… And pulls the fucking pin.”

In Book 2, Pawn, we pick up where Pike left off, but there was a LOT going on and it felt a bit rushed to the climax. I think perhaps this would have been better as a trilogy because I would have loved to have seen the relationship deepen and for the climax to have a lot more detail, especially because it deals with racism and hatred — I would have like to have seen a deeper exploration there. But on the other hand, it being such a touchy subject right now, it can be a really hard thing to write about with the correct tone and keep with the book’s gritty feel. T.M. Frazier did a great job of it, I just selfishly wanted more. If she takes her time and does her research, there is a great spin-off novel that can deal with it.

“My war has a bigger meaning. A bigger purpose. And that purpose isn’t just revenge. It’s humanity.”

T.M. Frazier is often poetic in her grittiness and I absolutely love that about her writing. I had a TON of amazing quotes that it was so hard to pick from for this review.

“Pike and I aren’t at war. We never were. We are what’s left over after the battle’s already been lost on both sides. We’re not soldiers. We’re carnage.” 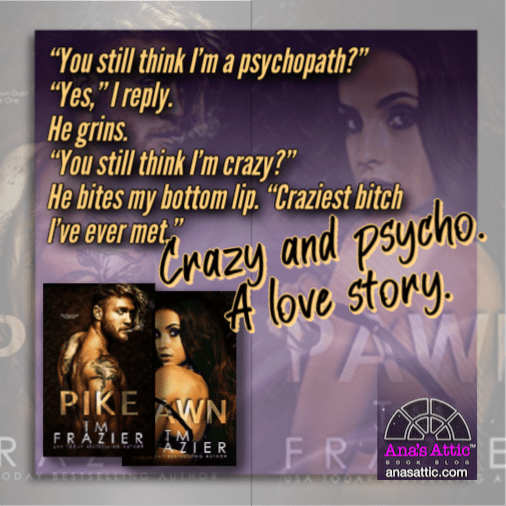 I absolutely love T.M. Frazier’s gritty style of writing. They read almost like an Urban Fantasy with no real superhuman abilities. I loved that the Pawn Duet tied in so well to the entire King Series yet can probably stand alone pretty well. The best thing was that they made me forget about the virus plaguing the world even for just a little while. Since it’s such a hard time for anyone to really focus and be creative, I wish Tracey would have taken a little more time with these books and maybe even stretched them to three because they needed another round of edits, the end felt rushed with some loose ends, and the books could have easily been expanded because so much was going on.

Pawn also dealt with some very sensitive subjects during a very volatile time, and I can’t imagine how it must have been to write about the subject of racial hate while it’s blowing up all around us in real life. T.M. Frazier is still one of my favorite authors, and the Pawn Duet helped ensure that she remains in that top spot. Even with a few nitpicking complaints, I still LOVED the duet, and really hope we get at least two more spin-offs from it.

See the reading order of all the books in the King Series, including spinoffs right here.