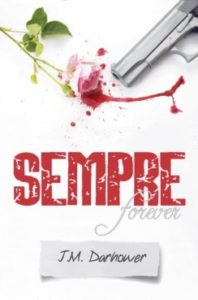 Wow. This book, Sempre (Forever) by JM Darhower grabbed me, pulled me in, and didn’t let me go for 3 days. While I usually prefer an older, slightly smuttier read, this story left me wanting for nothing. I laughed, I cried, my heart broke multiple times, I was on the edge of my seat, then it all began again. It was a long, meaty read and I hope to read a sequel soon. (I hear the author is doing one).

Haven grows up as a slave to a Mafia family in a nowhere town in California. She is bought by Dr. Demarco, another mafia guy who lives with his 2 teenaged boys in North Carolina while spending most of his time away, doing ‘business’ in Chicago. He lost his wife and the love of his life years before to the ‘life’ and somehow Haven is involved. Both of his boys were charming, but Carmine, the younger one began as a brooding young man who did drugs, fucked anything that had boobs, was messing around in school, and was the ‘Princepe’ to the mob.

Then Haven, who grew up with nothing, nowhere, came into his life like a ‘ninja’ and changed everything. Yes, this is a love story. A true, break your heart love story. But it is so much more. It deals with ‘La Famiglia’, human trafficing, loss of a parent/spouse, lots of violence, class differences, and the list goes on.

This is a book that will stay with me. It was wonderful in that it showed such innocence, and such cold-hearted killing. There are a lot of italian phrases which were beautiful, but since they took the wikipedia link off my kindle app, they were much harder to look up. That would be my only criticism. I would have loved an italian glossary. This did not detract from the book at all though. It added to it.

“Colpo di fulmine. The thunderbolt, as Italians call it. When love strikes someone like lightning, so powerful and intense it can’t be denied. It’s beautiful and messy,
cracking a chest open and spilling their soul out for the world to see. It turns a person inside out, and there’s no going back from it. Once the thunderbolt hits, your life is
irrevocably changed.”