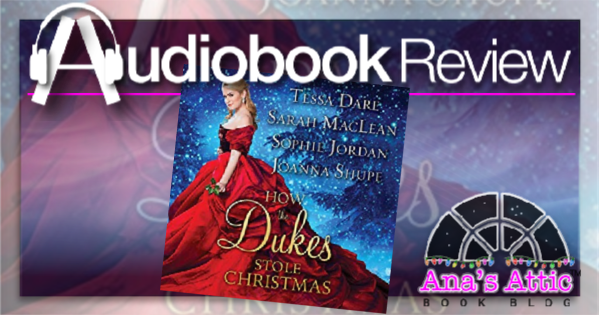 How the Dukes Stole Christmas

Since I did a LOT of holiday reading/listening this year and I want to review them all by Christmas, this will be a quick review. I don’t read much historical, but I read Tessa Dare a few months ago and fell in love, so I thought this would be fun.

MEET ME IN MAYFAIR by Tessa Dare

Louisa’s family is being evicted. She is hoping to find a wealthy husband at her friend’s party, but her friend has her own plans, and convinces Louisa to fill all the dances on her dance card while she runs away and elopes. One of those dances turns out to be with the Duke of Thorndale, the very man who plans on evicting her family. James never wanted to be a Duke, and he is just in town to see to some financial matters on his properties. He hates the women who fall over themselves for a Duke, so when Louisa was just the opposite, he was intrigued.

The two of them spent an extremely unconventional (and very inappropriate for the times) night about town falling in love. It was a fun, christmassy historical novella, I enjoyed it a lot, but didn’t wow me as I hoped like her last book did.

THE DUKE OF CHRISTMAS PRESENT by Sarah MacLean

Even and Jacqueline “Jack” were childhood friends, then a couple who planned to marry. They were neighbors who had a secret passage between them and he was beautifully romantic. But when he became the Duke his work absolutely consumed him, so much that he barely realized that Jack left to travel the world with her aunt. 12 years later, on Christmas Eve, she is back, and still in love. And he is still working.

I felt like this one was a little hard to follow in audio format. Past and present were a little difficult for me to distinguish, and I think I would have loved it if I read it rather than listened because it was a beautiful and a bit emotional story.

Annis is on vacation with her large family in Scotland. Her sisters and mother are loud and obnoxious, and her mom is obsessed with one of her girls marrying a Duke. After a disastrous first meeting with the Duke, he came off rude (with good reason) and she was embarrassed by her family. When her family packed up and hurriedly left their vacation home due to impending snow, they forgot the quiet sister, and left her behind with the two servants. With the weather just beginning, it looks like Annis will be staying the entire winter. When danger lurks, the Duke steps in to save the day and passion follows.

I enjoyed this one a lot. Some of it was crazy inappropriate and maybe even a little weird for the time, but it made for some sexy reading. I loved the servants pushing them together. This was like Home Alone for an Heiress and Duke. Cute story that I enjoyed the whole way through.

Rose Walker has always wanted to be a reporter, but in those days women just didn’t do that, so she was forced to take a job as an advice/Martha Stewart-type columnist. But a young, unmarried woman wouldn’t work, so they made up a fake persona of a very private older married woman who has traveled the world, and her column has become the paper’s crowning glory. The owner of the paper, Duke Havermeyer (he is the “Duke” in this story) worries because his newspaper has just suffered a scandal, and he needs to earn back his board members’ trust. He decides his most famous columnist MUST host a Christmas dinner party at her home in a few days time and show off the amazing tips she gives in her column. Rose is just a maid’s daughter, and because Rose REALLY needs this job, they have to find a way to fake it.

Even though Rose is supposedly married, Duke first fell for her reading her column, but when he met her and she was so young and beautiful and charming, he was gone for her despite her “husband”.

This was a cute story I enjoyed even though there was some super inappropriate stuff happening for the times (that’s what made it good!). I liked that it was different and showed a career woman when women didn’t really have careers.

Justine Eyre was good for most of it, but I had a hard time understanding some of the Scottish accented parts.

If you like historical romance and can suspend belief for the holidays, you will enjoy this anthology. I loved how each worked in the Scottish Shortbread Cookie despite being unrelated stories. I feel like these four stories went well together, they were all very different, but the theme of Dukes, Christmas and Shortbread ran through all of them. In an anthology I usually compain about the stories being too short, but I felt like they were all just right here, at about 100 pages each, or just over 3 hours each. I wanted to totally fall in love with this anthology and I didn’t get quite that far, but I did enjoy it.

Purchase How The Dukes Stole Christmas 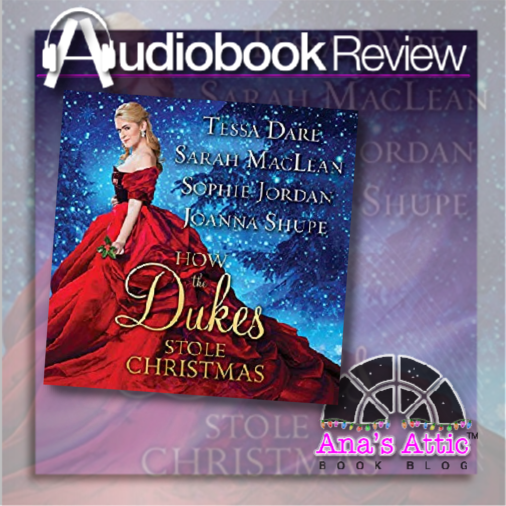