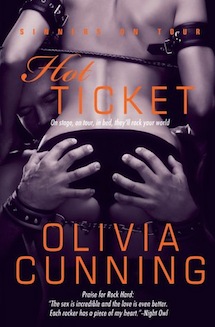 Today is the release day for Hot Ticket, and it has been a LONG TIME coming! You see, the books were printed out of order (see the series order), and Hot Ticket is actually third in the reading order. I have been waiting for Jace’s story, it seems like forever, and it was totally worth the wait. (See my review).

Please Welcome Olivia Cunning to Ana’s Attic with an excerpt from Hot Ticket.

To Love a Musician

It finally release day for the latest book in my Sinners on Tour series, Hot Ticket. I’m excited about this book. It has several interesting themes including letting go of the past, loving someone for who they are, marathon sex with Jace Seymour is hot, but one theme that recurs in the series is what it means to love a musician.

Jace had inched so far toward the back of the stage, Aggie rarely caught a glimpse. She could hear him though. The low pitch of his bass guitar throbbed through her entire body—the sound rich and alive and incredibly sexy.

When the song came to an end, the crowd cheered and then fell silent as Sed spoke into the microphone. “I guess you noticed the violin.”

Fans whispered to each other.

“Doc says I’m not allowed to scream for a while. So I’ll replace some of my vocals with the violin. If you hate it, blame Eric Sticks. It was all his idea.”

“I think it sounds cool!” a fan yelled.

“Yeah, cool!” someone else yelled.

The crowd broke into enthusiastic cheers.

Sed grinned. “Sinners fans are the best. You know that?”

“And if Sed starts crying, you know Jace will soon follow,” Brian said.

At the mention of Jace’s name, Aggie’s ears perked. She climbed a step at the side of the stage and craned her neck to see him. No luck.

The excessively tattooed roadie tossed a sponge onto the stage. It skittered to a stop at Sed’s feet. The crowd roared with laughter. Sed picked it up and pretended to mop up tears then threw it toward the back of the stage. A discordant bass guitar note rang through the speaker and then a sponge hit Brian in the back of the head. Aggie wished she could see better.

Travis’s pierced eyebrow wrinkled in confusion. “You’ve got the best seat in the house.”

“Oh.” He took her by the elbow and led her up the steps, around equipment on the edge of the stage.

When Jace came into view, her heart skipped a beat, and she smiled. Perfectly attentive to his surroundings, yet lost in his own world, he was an expert at pretending disconnection. Aggie knew better.

“Thanks,” she whispered to Travis just before the next song started.

Now that she could see Jace, she couldn’t take her eyes off him. His concentration was absolute, every note given equal care and precision. He was caught up in his music, as if nothing else in the world mattered. He played his instrument with the same care and attention he showed her when they made love. Her heart gave a painful lurch when she realized that music was his entire existence. His purpose in life. His reason for being. She would never matter to him as much as his band—these songs, this stage, any crowd. She tore her eyes from Jace and forced herself to watch the rest of the band, terrified by the direction of her thoughts. Why was she so hung up on this guy? Why did she care that she’d never be the most important thing in his life? It wasn’t as if she was contemplating a future with him. She didn’t contemplate her future at all. There was no point. If fate wanted to take her for a ride, it was beyond her control. Why even worry about it?

When her eyes drifted back to Jace, she found he was watching her. He offered his sexiest, gentlest smile, and she had the inexplicable urge to flee. She forced herself to stay put—to face these alien feelings swirling through her heart. To come to terms with the idea that he was important to her. It didn’t matter if he reciprocated her feelings. She wanted him to be happy, to be with him in any capacity he allowed—devoted and dedicated so he could pursue his first love. Music.

Do you think it would be difficult to love a musician so dedicated to his work and married to his career? How do you think Aggie might deal with this issue?

Enter to win a signed copy of the book.  This giveaway is open worldwide. Just answer my questions in the comment section below to be entered.

I am going to answer this one myself as well, and since I can’t enter, I will answer here. My son is a musician. He is a lead guitar player and now singer, and has been referred to as a prodigy. Luckily he plays music I love, and has been performing live for close to 5 years, since he was 10. This boy lives and breathes music, guitars, and guitar gear. As many times as I have seen him on stage (hundreds) I still get a rush of such intense pride and I just want to run around and scream “That’s my boy! I made him!” (click here for his youtube)

But I know, as much as he loves me and his father and brother….guitar is such a part of him, I can never compete, so I do my best to support him, help him, and I listen to him yammer on about guitar pedals for hours. Because that is what you do when you love someone who has that musical gift…or anything that is such a part of them you have to embrace it or move on. (Not that I would move on with my son…). But I can tell you this..you have to know, if you love a true musician, don’t ever make him choose. You need to have your own interests to pursue as well!

Now answer the questions yourself to win a signed copy of  Hot Ticket.