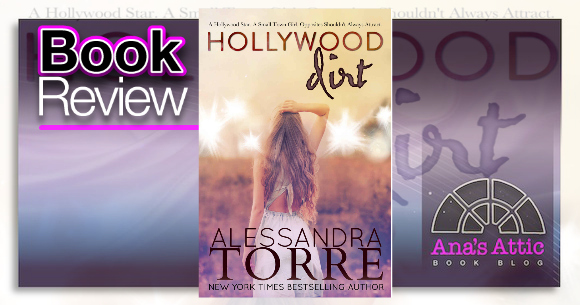 Hollywood Dirt by Alessandra Torre has one of my favorite themes. A hot movie star with an ordinary girl. Sounds formulaic, right? Nope, it was anything but. I read this book right before and after surgery so it has been a while, yet it stuck in my head pretty well.

Cole Masten, Hollywood heartthrob, was very much in love with his  superstar wife. Until he caught her cheating, and he became the sexy bachelor who screwed everything in sight. But with divorce negotiations happening, Cole needs to stop his sexual escapades for a bit, so he heads out to the set of the movie he is producing and acting in a little early.

Quincy, GA is a small town that houses the original families who struck it rich with Coca-Cola. It’s a town of old money. A quiet town, that also holds some regular people, like Summer.

You can tell the truly wealthy from their confidence, their grace. People here don’t show their wealth, they hide it. They covet it.”

Summer has lived in Quincy her whole life. Due to an incident you will learn as the book goes on, she is not a popular girl in the town. She lives with her mother and wants to leave Quincy, but not her mom. She is beautiful, with very southern manners, but she is feisty!

Cole’s movie is about the sleepy town’s fortune, and the location scout used Summer to help find housing because the nearest hotel was far, far away. In the meantime, Cole Masten’s assistant had an accident and is unable to run Cole’s Hollywood life the way he normally did. Cole did nothing for himself. He was pure Hollywood, and coming into a town with dirt roads, no Starbucks, no assistant and no starlets was full-on culture shock.  But when he sees Summer in her threadbare swimsuit and all of her southern glory, he is immediately hooked. Unfortunately Summer doesn’t have the reaction every other woman in America has.

When he comes in her home and asks for sparkling water, I couldn’t help but laugh at the pretentious asshole myself.

You are not a man, I thought. A man doesn’t drink sparkling water; he chugs tap water from a hose after changing his oil.” ~Summer

Cole’s lack of manners and manliness caused Summer to pretty much hate him on sight. But Cole became obsessed with having her.

There was something about her, something that had tugged on him since the moment they had met. A tug that had become an addiction. An addiction that he needed to cure.”

Hollywood Dirt was filled with humor. My favorite was Cocky the rooster, and when Cole brought him to the feed store like a pet, I was laughing out loud.

It’s. A. Chicken.” The toothpick in the man’s mouth fell out as he spat out the words. “It’s not a pet. You don’t name the thing and give it a bedazzled collar.”

As the book went on, the sexual tension got stronger and stronger, and Cole did everything in his power to make that happen

I will drive there, pin you down on my bed, and worship your pussy. I won’t stop until my mouth is imprinted on your mind and your taste is my fucking middle name.”

I enjoyed watching Cole turn from pampered Hollywood star to a man. A man worthy of Summer.

They say that love is finding your soul’s mate in another. I found my match. I found him, let him wrestle me to the ground, and then turned around and made him mine.” 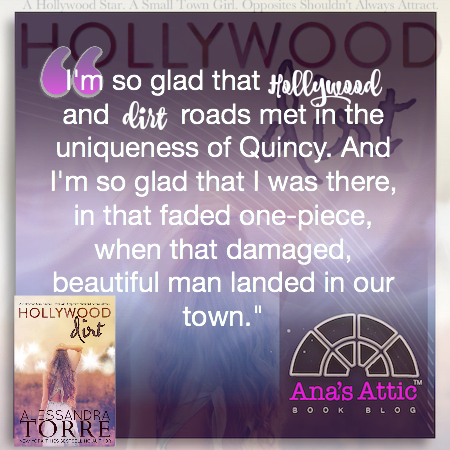 Hollywood Dirt by Alessandra Torre is not your typical Hollywood romance. Though it had a slow start for me, I still devoured the sexy banter and build up of the hate-turned love romance. Hollywood Dirt was filled with lots of humor and great characters, and I highly recommend it if you are looking for a light, fun read that will have you smiling the whole time. 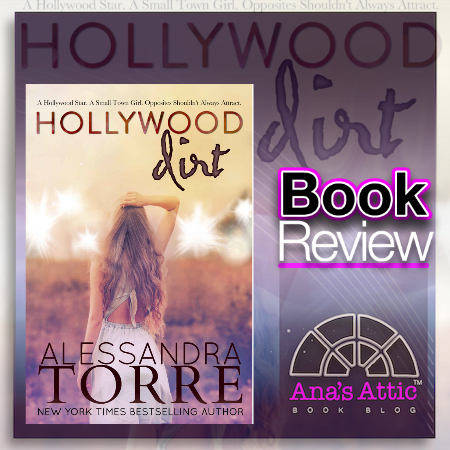