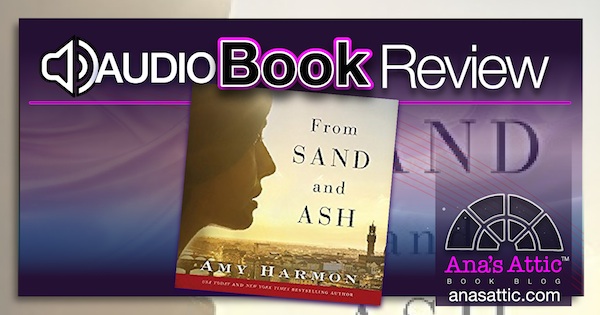 From Sand and Ash by Amy Harmon

I haven’t read a WWII era book since high school. I am not a lover of sad and ugly cry books. I read to be happy. But I read so many people saying that From Sand and Ash by Amy Harmon was a favorite of the year that I decided I could use a change of pace, and I grabbed the Audible version. I’ve not read Amy Harmon before because she is known for ugly cries, but after listening to From Sand and Ash, I bought two more Amy Harmon audible books immediately.

First of all, I need to start by talking about the narration. This is one book where the audible version has got to be even better than the regular. The narrator did an AMAZING job of taking Eva from a young girl to a mature woman, as well as using Italian, Yiddish, German and French accents so perfectly it just enhanced an already incredible story.

Next, the story. Yes, it’s an epic forbidden romance, but it is SO MUCH MORE. It’s a history lesson disguised in a compelling, emotional story based on true events. There are a lot of stories that take place during the holocaust, but most take place in Germany or Poland. I honestly did not realize how many Italian Jews there were, and what happened to them during the war. It felt good to really learn something while doing what I love (reading), and this inspired me to pick up more books like this where I can learn and not just escape.

“Why do people hate us so much?”

Eva Roselli is Italian. Her family is Jewish, but they are not religious. They don’t attend temple, but they still follow the Jewish traditions. Angelo Bianco was 12 when he was sent from America to live with his grandparents who worked for the Roselli’s in Italy. At 12 he already was slated to be a Priest, going to Catholic school and then the seminary. There was no other path for him, it was what he was born and raised to do. Angelo and Eva grew up together. She loved him and he loved her, but knew he had to avoid any situation where that love gets out of control. His first commitment is to God, and as a Priest in training, there is no other love allowed.

“I never really thought about being Jewish until I started to be persecuted for it.”

Amy Harmon did an excellent job of showing how little things that may seem like nothing at first can snowball into bigger and bigger things. To read about how first non-Jews couldn’t work for Jews, then Jews couldn’t own businesses or go to school, Jews couldn’t marry non-Jews, then Jews couldn’t vacation where they had their whole lives. Instead of running, the thoughts that it couldn’t get worse, or that the Pope would step in kept the Italian Jews in Italy waiting it out. But it did get worse. Much worse, as the Jews began to be rounded up.

As the war gets worse and worse, somehow despite the horrors, Amy Harmon is able to weave hope into the story, and pride in the characters who did everything they could to help.

“Fear is strange.
It settles on chests and seeps through skin, through layers of tissue, muscle, and bone and collects in a soul-sized black hole, sucking the joy out of life, the pleasure, the beauty.
But not the hope.
Somehow, the hope is the only thing resistant to the fear, and it is that hope that makes the next breath possible, the next step, the next tiny act of rebellion, even if that rebellion is simply staying alive.”

Angelo loves Eva. but he knows he can do more to help as a priest than anything else. I had no idea how much the Catholic Church did to help the Jews during the war. But the Nazis weren’t picky. They were rounding up priests and anyone who helped the Jews.

Who will help them? Angelo saw his Eva in every Jew. He worked tirelessly to help Jews, get them fake papers, get them out of Italy or hide them as best they could. But it wasn’t just the Jews who lived in fear, it was everyone. Still, Angelo lived his life to protect Eva. All he wanted was her to hide out and be safe. 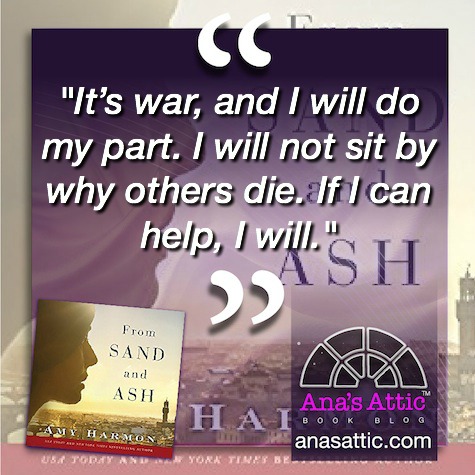 Eva was so strong. There was no way, no matter how much she loved Angelo (even though she could never have him) that she would sit by and hide, so she fought and did everything possible to help fight the horrors.

My goodness. We think things are bad in the world? We think our lives suck? Read this and believe me, you will thank your lucky stars for everything we have. The fact that these horrors happened recently enough that people are still alive from that time is just unbelievable to me, and similar things still happen today.

From Sand and Ash was filled with suspense and action, but at the heart of it was the love between a Jewish girl and an Italian priest. It never felt sordid or wrong. In war, you grasp at anything to bring some light into your life, and their love was the only light they had.

“With our hands, we reach for things we shouldn’t have and we grasp what isn’t ours. The way I have always reached for you.”

From Sand and Ash is one of the most important books I have read since I began blogging. I feel like everyone should read it. The more we know about the past, the more we can recognize if it starts again in the future. The horrors of WWII are not sugar coated in any way, and Amy Harmon transports you to Italy during all of the events. There was so much background, and you know the characters so well that you feel like you are Eva. I literally felt her fear, and as I write this, I am flashing back to moments in the book and I’m crying again. Being Jewish, this story also helped me understand a bit more of my parents, who were children during this time. But you don’t have to be Jewish to relate and connect to this book. I honestly think From Sand and Ash should be required reading for high school students the way The Diary of Anne Frank is for elementary.

My words can’t do a book like this justice, but I can tell you that it will not only be on my best of 2016 list, but my all-time favorite list. Amy Harmon is an author that has been recommended so many times. I have several of her books on my Kindle, and just purchased more of her audiobooks. If they are even half as good as From Sand to Ash they will be 5 star reads for me.

Purchase From Sand and Ash by Amy Harmon 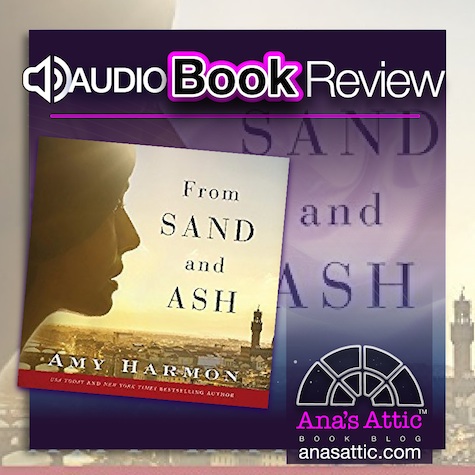