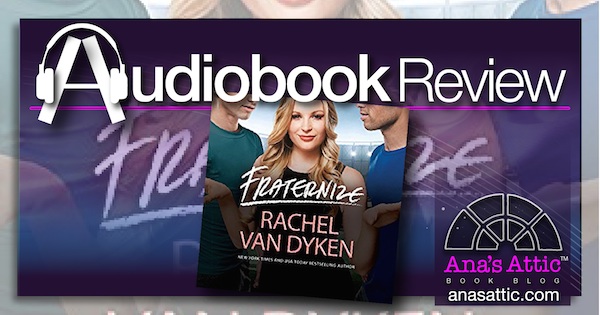 1st in a series of standalones. Sports Romance.

I picked up Fraternize by Rachel Van Dyken when I saw there was a plus-sized cheerleader. I own a bunch of Rachel Van Dyken’s books, but have never read her, so I grabbed this quick! There is a love triangle in Fraternize, but different than you are used to, and there is NO CHEATING.

“Six years ago, I’d kissed a football player and lost my heart. Five seconds ago, it felt like, maybe, I had been given a part of that heart back, and it felt good, really good.”

I usually talk about the book a little in my own words here, but I am afraid to give something away, because I want you to be surprised as well. So here is the blurb:

Emerson just made her dream come true as a professional cheerleader for her favorite pro football team. But even though the plus-size athlete is breaking down boundaries, she still has to contend with the massive rulebook. Carbs? Nope. Chocolate? Definitely not. Still, Emerson loves her curves, and she’ll rock the hell out of this job even if it kills her. Except for one mandate that is easier read than done…

No fraternizing with the players.

Problem one is Miller Quinton: Emerson’s first love, first sex, and the guy who still ignites her daydreams and R-rated fantasies. Thrown back together, Miller and Emerson feel the undeniable pull of passion again, even if the conflict that tore them apart seems insurmountable. Then there’s way-too-sexy Grant Sanchez. He has a serious reputation with the ladies, and when it comes to winning someone he wants, he doesn’t let anyone stand in his way.

Now Emerson is breaking every rule in the manual. But what she doesn’t know is that she’s part of a wicked little game—one that could steal both her dream and her heart.

“But I was lacking one thing. The ability to squeeze my body into a size two, four, six, or eight. Who do we appreciate? Food, damn it!”

I loved that Emerson was a bigger girl and that it played into the story just the right amount. They didn’t harp on her weight, nor was it ignored. It was the reason two guys were attracted to her, but also the reason the girls were mean. I loved that Sanchez called her “Curves”.

Holding a sandwich against my lips like it was better than sex. Which, let’s be honest . . . close tie.
“I won’t tell,” he whispered. And suddenly, my brain wasn’t just lusting after the sandwich. I took one bite. A huge bite. Too big for my mouth. Miller’s eyes heated. It was dirty McDonald’s foreplay. I chewed.
He made a noise in his chest before visibly adjusting himself and letting out a curse.

Now here is the thing. This book kept me guessing the whole time. I didn’t know who I wanted her with, and I didn’t know who she would end up with. I loved Grant Sanchez. He was sexy, cocky, funny, flirty and an all-around good guy. Miller was her first love. They were best friends in school and I loved reading about their high school friendship and romance, and there was still chemistry between them.

To make matters worse, both of the guys share a floor in the building. Two penthouse apartments, one guy in each! Eek! So no matter who she is with, she can bump into the other, or even hear the other! At the beginning, you kind of want to hate Sanchez, but you just can’t.

“The guy was insane! Like a psychotic, wiggly hot worm that worked its way into your life and refused to let go. I relived his stupid kiss about as many times as I relived Miller’s heated look.
I was in deep.”

I’m not even sure I am thrilled with the outcome of the story, but I am thrilled that the book kept me guessing the whole way through. I’m excited the other guy gets his own book next. DO NOT read the blurb for Infraction until after you read Fraternize!

There were 3 narrators. I’m not a big fan of Jeremy York, who played Miller. He kind of sounded like an old man to me, but Sanchez, played by Aiden Snow….YUM. Summer Morton was absolutely perfect, and I was thrilled to hear a voice that isn’t in 90% of the other books I read. I loved that there were 3 narrators. (Rating explanation: Miller is a 3, Summer is a 5+++ and Aiden a 5, so I will rate the narration a 4 in total)

Fraternize by Rachel Van Dyken was a unique surprise! I picked it up because I like books with plus-sized heroines, but ended up with a very unique love triangle where I wasn’t sure who I wanted her to choose, and it kept me guessing for much of the book. Fraternize was fun with very likable characters, and leads us perfectly to the next in the series, which I have to read, because the other guy needs his HEA!

Audiobook currently is a $1.99 upgrade

Infraction releases 1/9/18 Do not read the blurb until you have read Fraternize or it will spoil the whole thing. 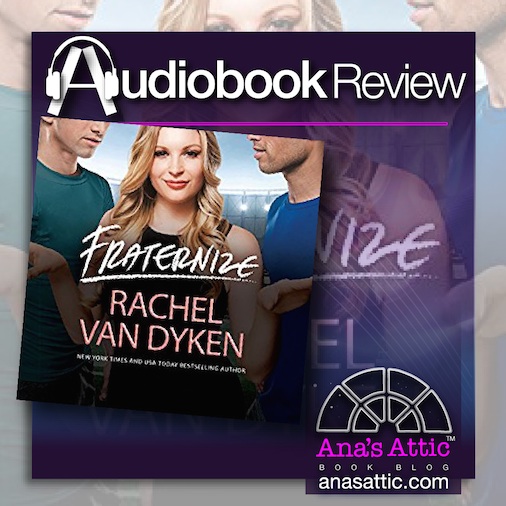